Calling the stock market a bubble has become something of a sport for pundits and investors alike ever since the Great Financial Crisis ended:

April 13, 2021: A growing number of investors believe the stock market is in a bubble (Business Insider)

We’re on year 12 of bubble predictions.

The thing is actual stock market bubbles are relatively rare.

You have historical bubbles like the South Sea Company, Mississippi Company and Railroad bubble that took place in 18th and 19th centuries.

The 1920s run-up to the Great Depression was a massive bubble. Japan in the 1980s is arguably the greatest financial asset bubble in history. The dot-com bubble of the late-1990s is up there as well. The real estate madness of the aughts morphed into a full-fledged global credit bubble.

While relatively rare, it would be foolish to assume manias can ever be eradicated. Unless our hard-wiring somehow changes, they’re here to stay.

It’s in our nature. We humans have a tendency to go overboard and take things to extremes. We can’t help ourselves, especially when it comes to new and exciting technologies or financial securities.

French polymath Gustave Le Bon wrote The Crowd: A Study of the Popular Mind all the way back in 1895. The passage sums up his findings pretty well:

The most striking peculiarity presented by a psychological crowd is the following: Whoever be the individuals that compose it, however like or unlike be their mode of life, their occupations, their character, or their intelligence, the fact that they have been transformed into a crowd puts them in possession of a sort of collective mind that makes them feel, think and act in a manner quite different from that in which each individual of them would feel, think and act were he in a state of isolation. There are certain feelings that do not come into being, or do not transform themselves into acts, except in the case of individuals forming a crowd.

In a more recent book, The Delusions of Crowds, William Bernstein describes why this herd mentality persists:

Manifestly, man is the ape that imitates, tells stories, seeks status, morally condemns others, and yearns for the good old days, all of which guarantee a human future studded with religious and financial mass manias.

Man being the ape that imitates seems especially relevant at the moment.

Even Alanis Morrissette would find it ironic given Bernstein’s description that JPEGs of bored apes are selling for millions of dollars. 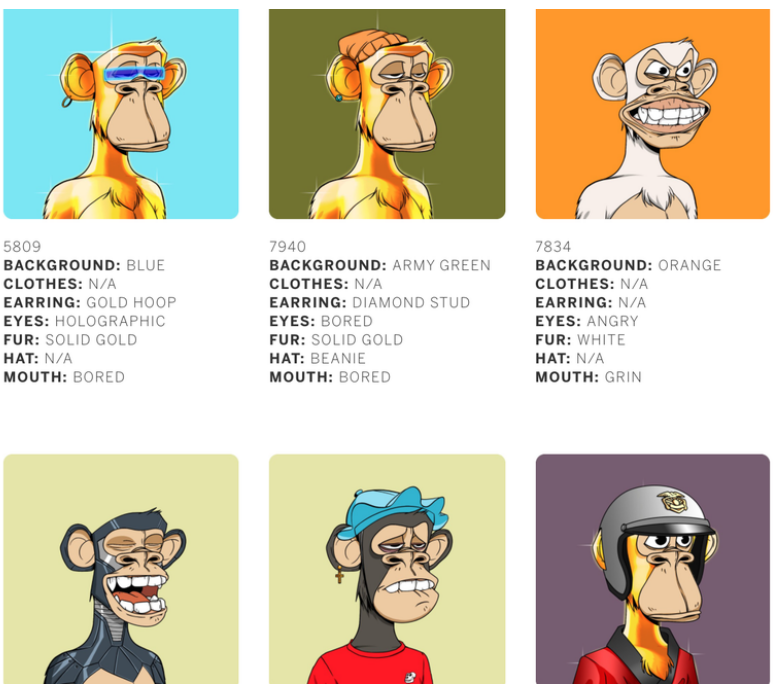 I mean they’re kind of cute and all but 101 of these bored ape NFTs were sold this week at Sotheby’s for more than $24 million. That seems like a lot.

I wouldn’t blame you for calling today’s NFT prices a mania. It sure feels like it.

I won’t get into the debate about art, status symbols and all of that but the biggest NFT platform, OpenSea, did $3.4 billion of volume in August.

This sounds like a lot of money and it is. But it’s also a drop in the ocean when it comes to the world’s hundreds of trillions of dollars in collective wealth.

If NFTs are a bubble it’s relatively contained to a small group of people. Even if they all went to zero tomorrow it’s not like it’s going to spill over into the broader financial system.

In his book about religious and financial manias, Bernstein lays out 4 characteristics that tend to accompany a bubble:

(2) People quit their jobs to speculate in the financial asset du jour.

(3) Skepticism about fast-rising assets is met with scorn and ridicule.

(4) The market is full of outlandish predictions about future prices.

You could make the case that a number of financial assets or markets meet or come darn close to meeting these criteria today.

The difference between today and previous manias is the presence of social media and the instantaneous dissemination of information (and misinformation) which didn’t exist in the past.

We’ve always been a tribal species but the internet has lowered the barriers to entry for getting caught up in crowd psychology. It’s never been easier to imitate, tell stories, seek status, morally condemn others, or yearn for the good old days on a massive scale than it is today.

It’s also never been easier to press the right buttons to take advantage of the tribal instincts that make us susceptible to these human foibles. You could make the case the information age also makes us more susceptible to manias, especially of the financial variety.

I won’t argue with that conclusion but I also think it changes how these manias are disseminated.

Think about it this way — TV used to be 3 channels. You had no choice but to watch whatever was on those 3 channels so the viewership for any show was massive.

Now cable TV has hundreds of stations. Plus we have dozens and dozens of streaming services. And then there are all of the videos available on the internet.

There are simply too many options for any program to matter on a grand scale like it did back in the day.

This increase in choice of what to watch could be a precursor to the way financial manias play out in the future.

There are now so many strategies, funds, securities, financial assets, investment platforms and stuff to invest in that it’s going to be difficult to have a full-fledged mania.

The increase in choice has altered our attention spans.

I will never rule out the possibility of a full-fledged mania because people are still people but I get the feeling there will be more mini-manias.

It’s entirely possible the internet has created an environment in which mini-manias occur more regularly than they did in the past without creating a situation in which everyone collectively loses their minds.

So we could have mini-bubbles that blow and pop without causing as much serious damage as when they were more widespread.

If this is the case, the bubble prognosticators will remain irritated.