Frederick Lewis Allen wrote the definitive book on the 1920s called Only Yesterday: An Informal History of the 1920s.

The book was published in 1931 and discusses one of the most transformational decades in modern history. It’s a wonderful companion piece to any of the hundreds of books written about the Great Depression because it helps you understand what occurred in the lead up to that disastrous period.

The introduction to the book walks the reader through the massive changes that occurred between the end of the 1910s and the end of the 1920s. Allen paints a picture of what life was like in 1919 and then compares it to the wonderful advances in technology that came about because of the Roaring 20s.

The first chapter is devoted mainly to the end of World War I and the impact that had on the collective psyche of Americans.

Surprisingly, the flu pandemic that gripped the world from 1918-1919 gets just one passing line, with Allen commenting that the influenza pandemic had “taken more American lives than had the Germans, and had caused thousands of men and women to go about fearfully with white cloth masks over their faces.”

It was basically a footnote, with the war given far more shelf space in terms of what shaped people’s attitudes heading into a new decade.

A global pandemic that killed an estimated 50-100 million people worldwide, 5% of the world’s population, barely registered a mention in what shaped society in the years leading up to the 1920s in a book that was written just 12 years later.

That pandemic was exponentially worse than what we’re currently living through and I feel like the current situation will be studied, second-guessed and hindsight-biased to kingdom come in the coming decades.

Yet it does make sense that a war of that magnitude, encompassing so many countries would overshadow a virus that was little understood at the time. The U.S. government also devoted more time, effort and resources to the war while they downplayed the pandemic in an effort to keep up the country’s spirits.

It’s also hard to believe the U.S. was ever able to pick itself up off the turf to make the Roaring 20s happen in the first place. Let’s go through a list of what occurred in the lead up to one of the biggest boom times in our country’s history:

World War I (1914-1918). This remains one of the largest wars ever fought, with upwards of 70 million members of the military involved worldwide. World War II has more storylines but it’s estimated 9 million soldiers and 7 million civilians perished in what was one of the most brutal wars on record. According to Dan Carlin, soldiers didn’t even wear helmets until the end of the war to provide protection.

In 1914, the stock market closed for a period of around four months because liquidity all but dried up when the war began. 1915 is still one of the best performing years on record for the Dow.

The war also played a major role in the spread of the Spanish Flu pandemic. Researchers believe the virus actually began to spread at a military base in Kansas and grew from there as soldiers deployed around the globe.

Influenza Pandemic (1918-1919). Epidemiologists today estimate somewhere in the range of 50-100 million people may have died from the worst pandemic in history. Half of those who died were in their prime ages (20s and 30s). It lasted nearly two years but two-thirds of the deaths took place over a 24 week period.

And because the country was in the midst of the war, President Woodrow Wilson gave no reassurances to the citizens at large. John Barry explains:

I can’t imagine how terrifying this was at the time considering useful antibiotics had yet to be discovered and the lines of communication are nothing like they are today.

Post-War Recession (1918-1919). The flu outbreak and end of the war played a role in a 7 month recession that saw the economy shrink by 25%. It must have felt like a flesh wound what with everything else that was going on.

The Depression (1920-1921). The depression of 1920-1921 occurred just 10 months after the post-war recession ended. Overshadowed by the Great Depression, this one may have been an even greater deflationary force.

GDP contracted more than 38% while 1920 remains the most deflationary year on record in modern economic history in the United States, with prices falling close to 37%.

The federal government likely made things worse during this downturn, slashing spending by one-fifth in order to pay down war debt. And for some reason, the Federal Reserve actually raised interest rates, from less than 5% to 7% in 1920.

This 8 or so years looks like hell on earth: 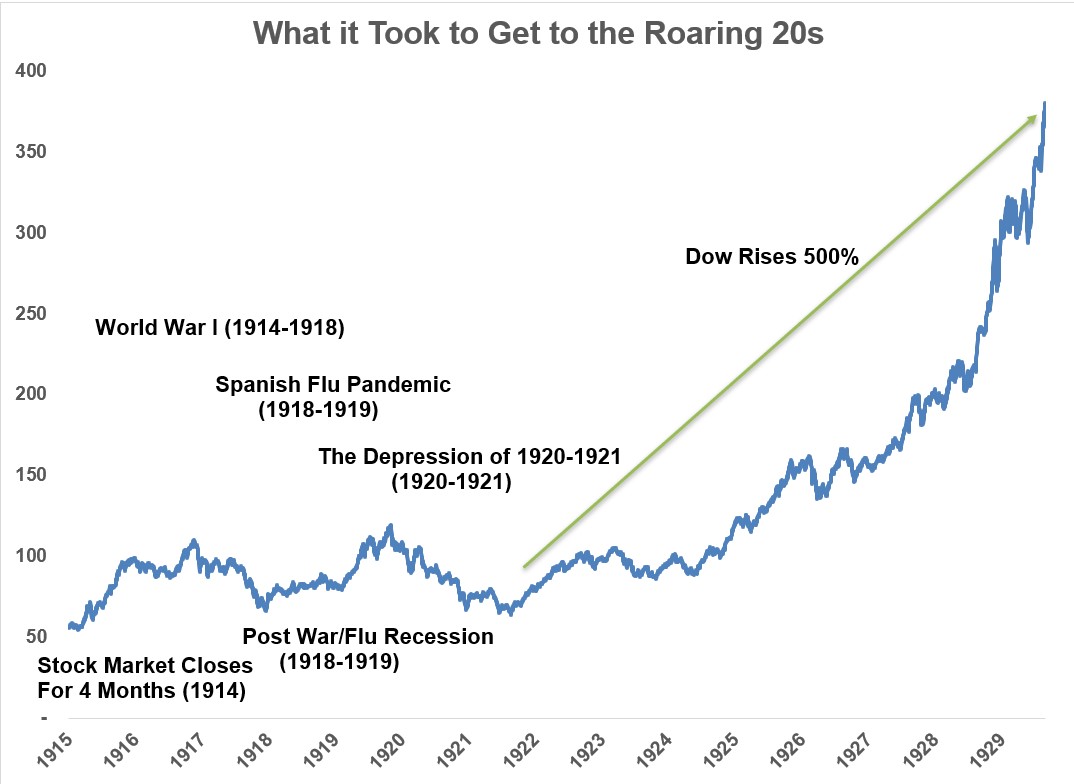 And yet…look at what came during the aftermath.

How many people at the time would have predicted during the war/pandemic/recession/depression years that the 1920s would be one of the most innovative, prosperous periods our country had ever seen?

There was a massive stock market boom and explosion of spending by consumers the likes of which were unrivaled at the time. After the immense pressure of the Great War, many people simply wanted to have fun and spend money.

Pessimism is a natural feeling when things are bleak but it never lasts.

Of course, I failed to mention what happened at the end of those Roaring 20s — the greatest economic crash this country has ever seen.

In a follow-up piece, I’ll look at some of the similarities (yes there are some) and differences between the Great Depression and our current economic shutdown.