“The stock market has predicted nine out of the last five recessions.” – Paul Samuelson

The worst historical periods for investment returns have tended to cluster around major economic events such as the Great Depression, the highly inflationary environment of the 1970s and more recently the Great Recession.

Stocks are said to be forward looking so technically they should price in the possibility of future recessions or economic expansions.

Here’s the data from Professor Jeremy Siegel to show this in practice: 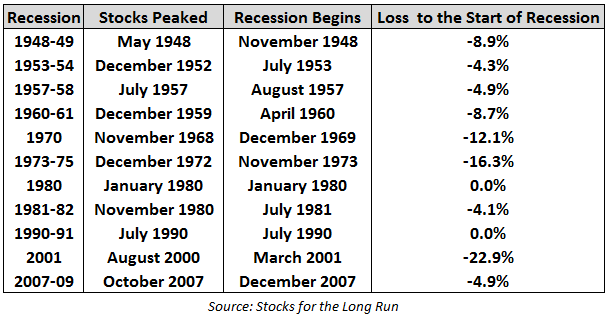 This shows how the Dow Jones Industrial Average has front run the past eleven recessions. Stocks dropped an average of about 8% leading up to the start of each recession so it does appear that investors were prescient by selling before the economy slowed.

On the flip side, stocks also tend to climb a wall of worry and rise before the economic downturn is over in anticipation of the return of growth as you can see here: 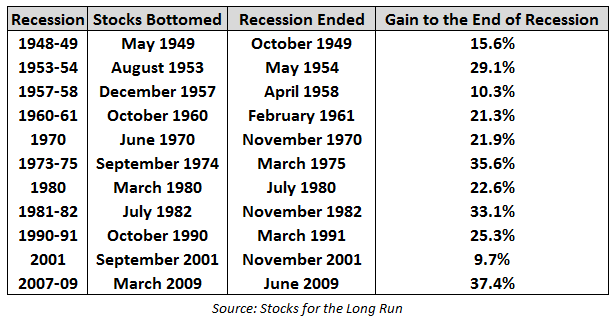 So stocks rose an average of nearly 24% before the end of the post-World War II recessions.  This is why you can’t exactly sit around and wait for things to get better before investing when things look bleak.  By the time the coast is clear you’ve already missed a nice chunk of gains (although we never truly know a recession has ended until much later when the data is finally released).

A pretty solid track record for stocks based on these numbers.

But stocks don’t always call every move in economic activity correctly.  GDP growth isn’t the only factor that investors rely upon to gauge the attractiveness of stocks.  Emotions play a larger role than most realize and there are always reasons for investors to get anxious.

That’s why we’ve had thirteen instances of the market selling off in excess of a 10% loss in that time frame with no recession in the following twelve months: 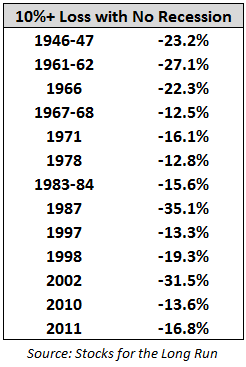 Hence, the Paul Samuelson quote from above.  This data shows that the market falls an average of 20% every five years without the economy ever going into a recession.  Stocks can be forward looking, but who knows what investors are actually pricing in at any given point in time.

The stock market is full of participants that have conflicting goals, time horizons, tolerance for risk and ability to control their emotions. Add this all up and the market will most likely go in whatever direction it pleases.

Over the long-term, the trend has always been up and to the right. Over shorter time frames who knows what will happen.

Sometimes the stock market and the economy are in synch with one another, but other times they march to their own tune. It’s difficult to use one to predict the other with any precision.

Can stocks fall in anticipation of a recession? Yes.

Can stocks fall for other reasons? Yes.

Can you or I predict the timing of next correction in the market or start of the next recession? Slim chance.

Stocks can and will fall for a number of reasons.  But you have to be a glutton for punishment if your investment plan relies on your ability to consistently call these moves.

Further Reading:
The difference between a crash and a correction
The truth about stocks and the economy