This was perhaps one of the easiest predictions I’ve made in recent years:

ARKK cannot outperform at this pace forever. There is bound to be a misstep or the style will simply fall out of favor for a period of time.

Cathie Wood’s flagship fund would peak just weeks later. The ARK Innovation ETF was down as much as 40% from its peak in early February of this year.

Wood was outperforming at such an amazing clip that it was bound to come to an end at some point. While ARKK is in a full-fledged crash, the S&P 500 is almost back at all-time highs and barely fell 5% in the recent correction.

Before you go patting me on the back, I wasn’t completely right about what would happen next (yet):

Many of the investors chasing the hot dot will head for the exits at that point. Investors don’t have a great track record when it comes to chasing the hottest fund of the day.

While ARKK has spent most of this year crashing, investors haven’t redeemed the fund en mass just yet.

Consider the fact that assets in the fund peaked at around $28 billion in mid-February. Through the close on Monday, ARKK was down around 39% from all-time highs. If we applied that 39% sell-off to the AUM in the fund we would expect to see a little more than $17 billion remaining in the fund. The actual AUM as of the close on Monday was a little less than $16.2 billion.

So investors have redeemed close to $1 billion from the fund. That’s a lot of money but not exactly people rushing to the exits after someone screamed fire in a crowded building.

That could still happen here. If ARKK’s performance underwhelms for an extended period of time it’s possible AUM could fall in a hurry. The longer this lasts the harder it will be for underwater investors to hang on.

But this isn’t the complete disaster many were hoping for.

For a number of years now more seasoned investors have been warning the noobs out there:

I’ve seen this movie before and I know how it ends.

Unless things are different this time…just wait, you’ll see.

The easy money has been made.

All of these new investors are going to panic during the next bear market.

Now, there is likely some truth or at least partial truth to these statements.

Every new generation of investors has to learn the same lessons as the previous generation. We’re all human after all.

But experience alone isn’t always enough to make you a successful investor. Experienced investors panic all the time. Who do you think holds all of the money that actually moves the markets?

They also miss big trends, hold onto legacy positions for too long, become overconfident in their assertions and can’t see how the world is changing around them.

And while it seems like younger investors have had it easy, there have been plenty of corrections during the current bull market. It’s not like downturns have been outlawed.

Since the last great crash of 2008 there have been plenty of corrections in the S&P 500: 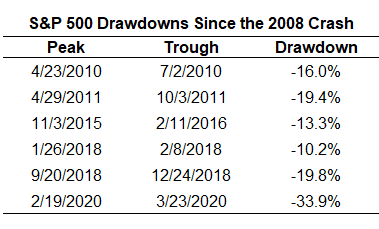 That’s six double-digit corrections since the bottom in 2009, with an average drawdown of nearly 19%.

Sure, these corrections have been relatively short-lived. They can be measured in months rather than years. But there have still been plenty of losses to speak of.

And the S&P 500 has been one of the best performing segments of the stock market in this time. 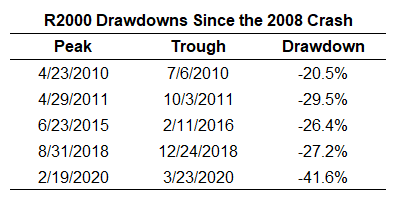 Every time the Russell 2000 has experienced a correction over the past 13 years or so, it’s been a bear market. The average loss is close to 30%. Small cap investors have lived through plenty of pain, even in a rising market environment.

And how about cryptocurrencies which certainly skew younger when it comes to the investor base.

The youths have been hodling Bitcoin for every single one of these crashes.

Yes, the gains have been wonderful in many parts of the market during this cycle but it’s not like things have gone up in the straight line the entire time. There have been plenty of opportunities to bail.

And who’s to say older investors will be able to navigate whatever comes next any better than new investors?

There are plenty of be older investors who are experts on an earlier version of the world.

Michael Lewis once wrote that it’s young people who are the first to spot new trends when they crop up, especially when it comes to technology:

A child still has time to save himself. To a child, being on the wrong end of the trend is not a sign that it’s time to dig in and defend the old position; it’s a signal to cut and run. Progress depends on these small acts of treason.

We’re all shaped by our experiences and formative years when it comes to how we view the markets.

There are investors right now who are expecting a repeat of 1970s stagflation because they remember those days. There are also investors who expect a repeat of the 1990s boom that followed the boom of the 1980s. Then there are those who are positive this is the second coming of the dot-com bubble peak in 2000.

Maybe there’s some truth in every one of these historical analogies. Or maybe they’re all wrong. We’ll see.

Every investor assumes it will be someone else that’s left holding the bag when the excrement hits the fan.

Young people do have to pay their tuition to the market gods at times. There’s no shame in that. But those youngsters also have time on their side to make up for those mistakes.

The most harmful mistakes often come from more experienced investors who assume they have the markets all figured out.