In 2016 I wrote a piece called Has There Every Been a Better Time to Be a Homebuyer?

Here were some of my reasons:

I can’t pat myself on the back too much for this call since it had more to do with the ease of the process than an actual price forecast.

And now, in the immortal words of Micheal Scott: 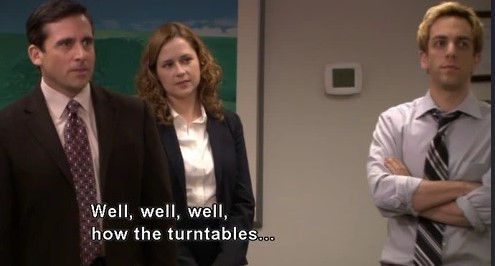 I think you could make the argument the current market is the worst ever when it comes to being a homebuyer. There has never been a better seller’s market but buyers are in a world of hurt right now.

Yes, rates remain low and houses are bigger and better than ever but this is likely the worst buyer’s market in modern economic history.

A new report from Zillow shows nearly half of all homes are now selling in less than a week: 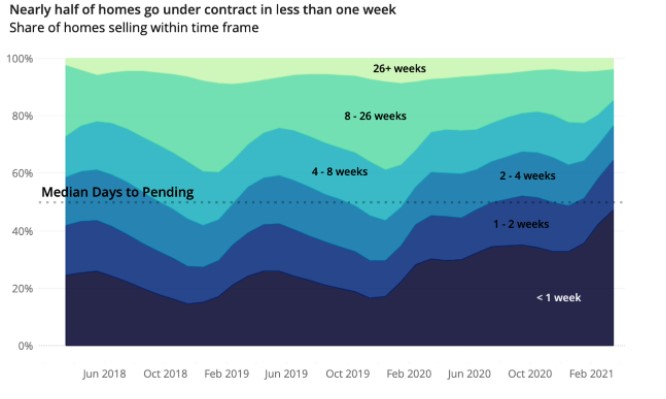 More than three-quarters of all homes are off the market in less than a month. In certain cities it’s even worse. Columbus, Denver and Salt Lake City are now seeing 70% of all homes sold in a week or less.

This obviously hasn’t helped with supply: 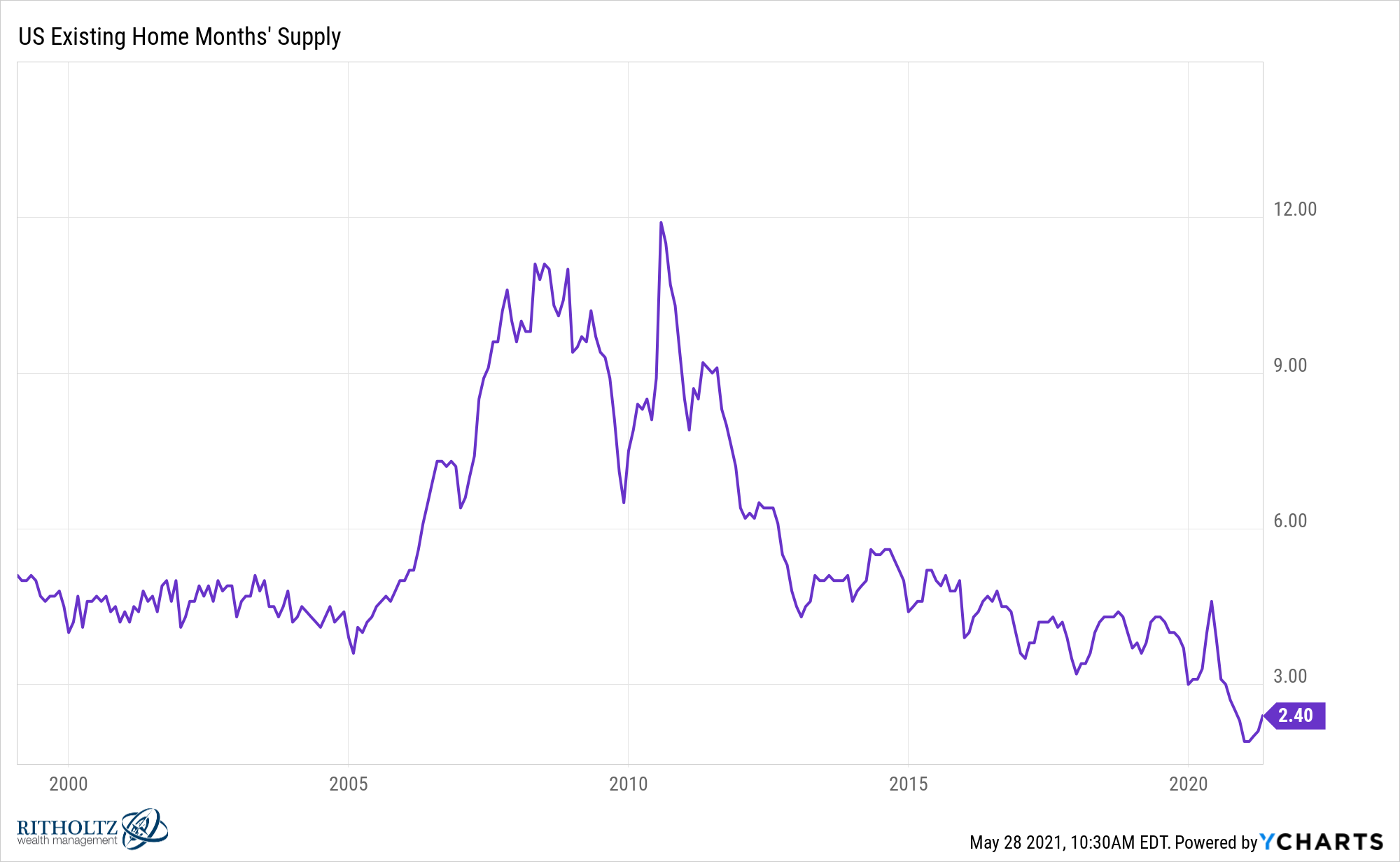 There are more realtors right now than houses for sale.

Because houses are selling so quickly, buyers are having to make all kinds of concessions to get the place they want. People are waiving inspections, paying in all cash and offering well over asking price in many cases.

Glenn Kelman, CEO of RedFin, summarized the insanity of the housing market right now in a recent thread on Twitter. Here’s a good summary of the inventory situation:

Which is causing people to make offers on houses sight unseen:

I can’t imagine how many of these people are going to regret this decision someday once they figure out potential issues with the home.

Another problem for many people who live in up-and-coming cities is the fact that buyers from higher cost areas are driving up prices:

You have people from places like Califonia and Seattle moving to places like Boise and Austin and Nashville, making it harder for local first-time homebuyers to afford anything.

Buying new is the best way to avoid making concessions and getting into bidding wars but lumber prices are making new homes far more expensive. Shortages have caused lumber prices to spike well over 200% in the past year: 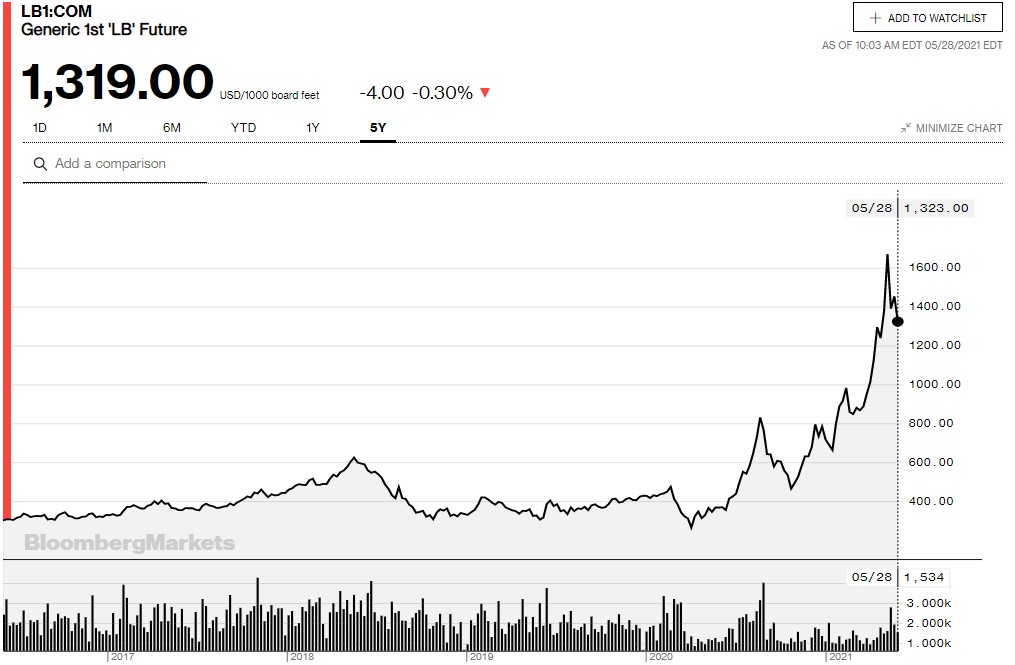 One report showed this has led to an increase of $36k in costs on average. For many who are building, it’s far more than that.

Now for some anecdotes.

This one from Kelman is, well, unorthodox:

Someone sent us this news story from Austin, TX where a homebuyer not only paid for their own new house in cash, but also purchased the home the seller was moving into on their behalf:

The Wall Street Journal profiled a number of young couples who are currently house-hunting. Here’s a line out the door for people waiting to get into an open house:

The kicker from this article is brutal:

After hours of waiting for a response to their bid on the Kensington Road house, Mr. Hazim got an email from the listing agent.

“Thank you for your offer,” it said. “We had 14 offers, and my sellers chose one that worked the best for them. Best of luck to your buyers.”

You’re in a very tough situation if you’re trying to buy right now. Some people aren’t going to want to hear this but renting is becoming more attractive by the day. 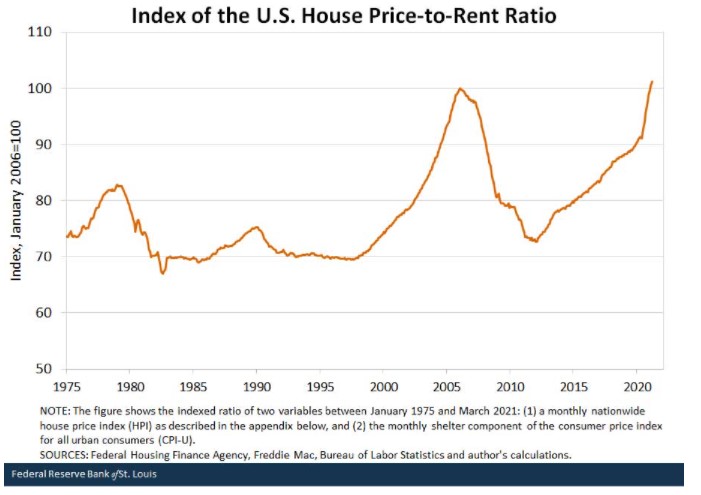 On a relative basis, it’s probably never been cheaper to rent in certain areas.

This may not be a consolation prize for those who desperately want to become homeowners but renting for a while longer could be the solution for some people right now.

Michael and I discussed the current housing situation and more on this week’s Animal Spirits video: