“I’ve seen this movie before and I know how it ends” is something bearish people like to say about the markets.

The implication is the movie will end in tears, and hence a market crash, since good times eventually lead to bad times.

Here’s my more positive spin on this perma-bear classic:

“I’ve seen this movie before and I know how it ends…with new all-time highs in the U.S. stock market.”

Maybe this will change at some point in the future but as of this moment in time, the U.S. stock market has always come back from any setback.

And the current comeback has to go down as the most impressive in history.

The stuff that transpired in the six months between these two milestones was unthinkable at the start of the year — a worldwide pandemic with millions sick and hundreds of thousands dead, quarantines, businesses completely shutdown, an economy that was effectively put on ice, double-digit unemployment rates overnight, the worst economic performance since the Great Depression and dozens of others awful things that have taken place.

Yet the stock market chugs along even in the face of all this uncertainty.

This is an awkward and bizarre time for the stock market to be hitting all-time highs.

Some are mad. Some are dumbfounded. Some are shocked. Others are in awe. I don’t know how to feel about this.

A few months ago I put out a hypothesis that our country’s bungling of this pandemic should offer hope to investors in overseas markets:

This crisis has actually given me more hope for international stocks going forward.

The U.S. has bungled our response in many ways when planning and handling the coronavirus. Many other countries — South Korea, Singapore and Germany to name a few — around the world have handled the situation far better. There is a lot we can learn from those countries who have handled this better than us.

Their response time, the technology they employed and the general planning that went into their individual strategies has been impressive. It’s hard to compare a government’s response to the corporations within that country but the willingness of these countries to get creative gives me hope for international stocks going forward.

The U.S. doesn’t have a monopoly on good ideas.

An international reader emailed to shoot down this idea, replying something along the lines of, “The biggest hole in your argument is these other countries care more about their citizens than the United States. In the U.S., you care more about corporations and shareholders than the rest of the population.”

This one stung a little bit but there probably is some truth to this criticism.

One of the only reasons government officials and central banks acted so swiftly in March with their fiscal and monetary rescue packages is because markets were falling apart before their eyes.

I assumed government in-fighting was one of the biggest risks to the market’s recovery over the past few months yet the deadline came and went to extend unemployment benefits, help those businesses who are in trouble through no fault of their own, and send money to those in need (including states and municipalities).

Congress decided to take a vacation instead of compromising on a plan. Yet the markets have so far just shrugged it off. And since the markets haven’t forced their hand, the politicians haven’t felt the need to act.

For every dollar of unemployment benefits, 73 cents were spent immediately. This worked spectacularly to help prop up the economy and keep millions of people afloat. It hasn’t saved everyone but it has saved a lot of people from financial ruin.

But people are still in pain. They’re still struggling to make ends meet and keep their livelihoods. 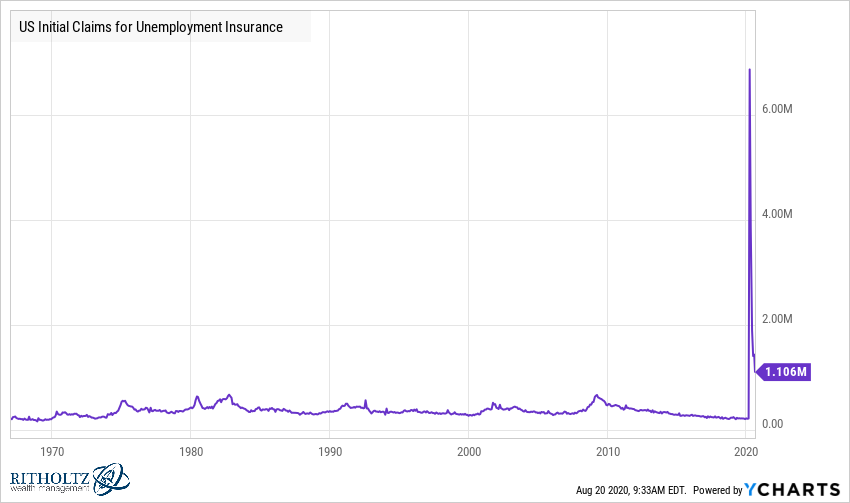 Last week’s jobless claims were still multiple time higher than anything we’ve seen over the past five-plus decades, including the Great Recession. Unfortunately, I think we’re becoming somewhat numb to these numbers since many the areas of the economy that are doing well are glossing over the fact that so many are still struggling.

In his masterful account of the 1930s, Since Yesterday, Frederick Lewis Allen wrote, “Statistics are bloodless things” when describing the Great Depression:

To say that during the year 1932, the cruelest year of the Depression, the average number of unemployed people in the country was 12½ million by the estimates of the National Industrial Conference Board, a little over 13 million by the estimates of the American Federation of Labor, and by other estimates (differently arrived at, and defining unemployment in various ways) anywhere from 8½ to 17 million—to say this is to give no living impression of the jobless men going from office to office or from factory gate to factory gate; of the disheartening inevitability of the phrase, “We’ll let you know if anything shows up”; of men thumbing the want ads in cold tenements, spending fruitless hours, day after day and week after week, in the sidewalk crowds before the employment offices; using up the money in the savings bank, borrowing on their life insurance, selling whatever possessions could be sold, borrowing from relatives less and less able to lend, tasting the bitterness of inadequacy, and at last swallowing their pride and going to apply for relief—if there was any to be got. (Relief money was scarce, for charitable organizations were hard beset and cities and towns had either used up their available funds or were on the point of doing so.)

Government and central banking actions this time around have helped prevent another Great Depression from occurring during the pandemic. Had they not acted things would have been much worse.

It’s great we’re back at all-time highs in the stock market. This is better than the alternative. I just hope the resilience of the stock market doesn’t lead to a sense of complacency among our elected officials. There are still millions of people whose lives have been disrupted through no fault of their own.

The stock market is acting like a short-lived recession is over.

For those who lost their job or business, it likely still feels like a depression.