Earlier this month GQ put out their annual list of best new restaurants in the country. One of the restaurants featured in this Gentlemen’s Quarterly guide was a place called Auburn in Los Angeles which they beautifully described as follows:

By contrast, I sighed inwardly as I stepped into Auburn, in West Hollywood, which greets you in the foyer all hushed and austere, draped in taupes and whites and beige, a symphony in sand. The last place I wanted to eat that night was a monastery.

The frost melts in the dining room, though, beneath the radiance of heating lamps that are the first tell that you are, in fact, partially outside. Large cuts in the wood ceiling let in the night air while an acacia tree stretches to the sky through a hole in the center, as though you’re in a yurt. If this is a monastery, you start to get the feeling, it’s some kind of pagan one.

There’s a similar vein of Midsommar savagery hidden beneath the smooth minimalist surface of Eric Bost’s food. Is there a more goth-sounding dish than black cod in a “sauce of its bones”? That was one of nine savory dishes and three desserts arranged in a grid on the menu when I visited. The notion is that you create your own “tasting menu” out of four, six, or eight of the courses, which seems like a long way to approximate a regular menu. For all Bost’s creativity in dishes like smoky roasted persimmons atop a creamy pillow of milk curd, I’d be sorely tempted to order four portions of Époisses cheese, spooned at the table over sunchokes and seeds and exuding the funk of an imaginary Melrose Avenue barnyard.

You couldn’t pay for this type of publicity. In a normal world, I’m sure patrons would have been beating down the doors to try chef Eric Bost’s savory dishes.

Unfortunately, we don’t live in a normal world anymore. Just days before GQ released their list, Bost made the decision to shutter Auburn just over a year after it opened.

Bost went on The Dave Chang Show this past week to discuss how difficult it was to come to this decision. Even with a PPP small business loan, a number of CPAs told him there was no way they could make it work from a financial perspective with the uncertainty surrounding the restaurant industry.

It’s unfathomable how hard this industry is getting hit right now:

The gains in employment for food services and drinking establishments is now below where it was in January 1990 when the Federal Reserve first began tracking this data. And it’s not just restaurants. The entire hospitality sector is feeling immense pain right now, with an unemployment rate fast approaching 40%:

This week Open Table estimated 1 in 4 restaurants in the United States will follow the same path as Auburn and fail to re-open.

It’s sad but true that this estimate may even be an understatement. Even as things “open up” again the rules, regulations and virus will make it nearly impossible for most restaurants to get back to full capacity. It could take years.

The restaurant industry is one of the many areas where the virus is hitting people on the low end of the wealth scale more than anyone else. People who make the least amount of money are losing their jobs at a higher rate than anyone during this crisis: 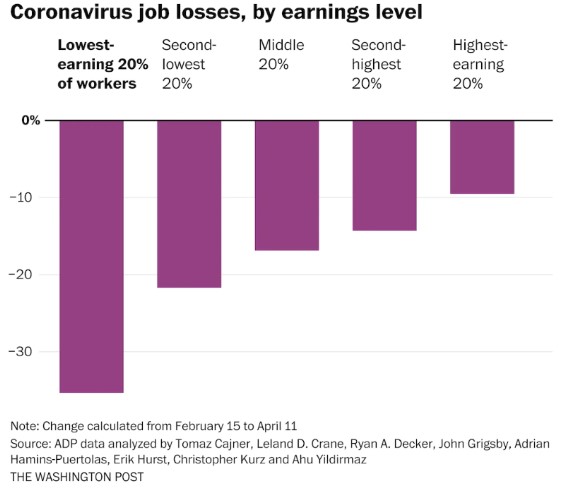 The same is true of the unemployment rate by education level:

Maybe one of the simplest reasons stocks have held up in the face of these massive unemployment numbers is because they are mostly held by wealthy people who have the ability to either sit tight or buy more of them when they fall.

The people being hit hardest by this crisis own few or no stocks. Roughly 85% of the wealth in the stock market in the United States is held by 10% of the population. 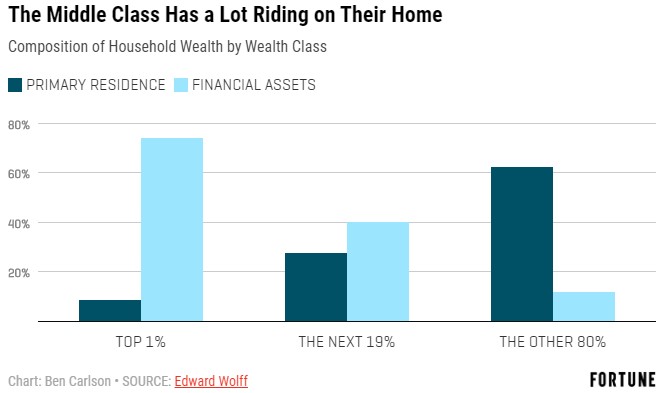 And many of those people on the lower end of the wealth scale will likely be forced to stop contributing or even pull money out of their retirement accounts if they do own stocks.

Corporate inequality is also becoming a problem during this crisis as small businesses struggle and the biggest companies only seem to get stronger. This week Disney raised $11 billion with interest rates ranging from 1.7% to 3.8%: 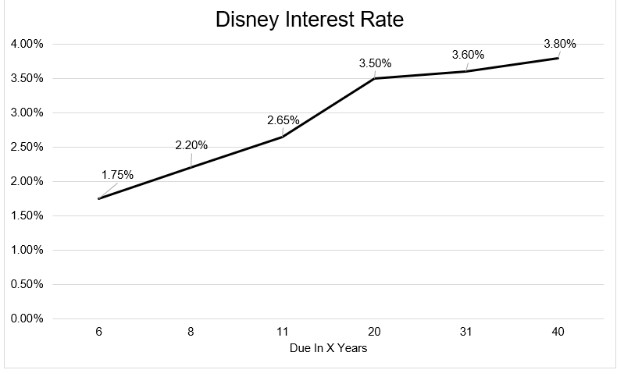 That’s a 3.8% 40 year bond from a company that is experiencing a massive slowdown in their main business lines (movies, parks and ESPN).

This is basically a form of corporate inequality where the mega-cap corporations are able to tap the debt markets to stay afloat while many small and mid-sized businesses don’t have the ability to do so at such outrageously low rates.

Initial data on the impact of the virus also shows the poorest communities are being hit the hardest with those areas with fewer resources are seeing higher case numbers:

Many in the wealthy class have the ability to work from home or flee areas where the virus is hitting the worst. There are people working right now because they have to not because they want to.

Many of these market and economic trends have been in place for years now and the pandemic is only speeding them up. Other issues feel like they’ve been created by a meteor hitting the earth out of nowhere.

No one asked for this virus so it’s difficult to point a finger at anyone to blame them for the outcomes.

But this is turning into a situation where the rich get richer, the divide between the haves and the have not widens and the anger coming out of the crisis will likely be even worse than it was coming into it.

I don’t know what the unintended consequences of this anger will be but it can’t be good.

I highly recommend listening to this episode of The Dave Chang Show to understand what’s going on in the restaurant industry. It’s sad but worthwhile to hear them out: Too Small to Fail, Vol. 7

Further Reading:
Why This Crisis is Going to Make Inequality Worse