One of these data points is unsustainable (okay maybe both).

The S&P 500 would have to go nowhere for the next 5 years to bring the 2009 returns into alignment with the long-term averages. So if the S&P saw 0% total returns beginning at the start of this year, the 14-year annualized return number from 2009-2022 would be 9.5%, right around that really long-term average number.

Of course, there’s nothing that says these long-term averages are written in stone or that we have to get back to those averages within a certain time frame. I’m simply trying to show how powerful this bull market has been.

To take things a step further, here’s a chart of the rolling 5 year total returns on the S&P 500 going back to the 1920s (from the starting year): 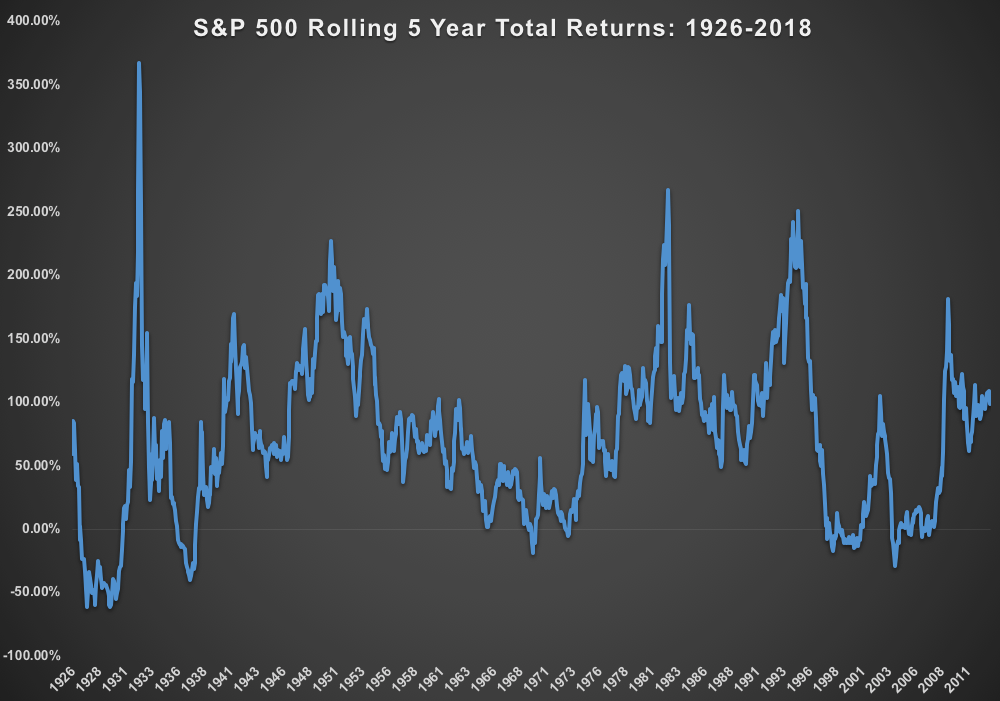 The worst 5-year total return since World War II began in the summer of 2004 and ended in the spring of 2009 which is where the market bottomed. That was a loss of around 29% in total or an annualized loss of around 6.6%.

Let’s use this as the worst case scenario. Let’s say the 5-year period from 2018-2022 sees a loss of close to 30%. We would have to see something out of the ordinary for this to occur but nothing is ever off the table when it comes to the stock market.

If the S&P 500 lost 30% of its value in total over the coming 5 years, the annual return from 2009-2022 would still be 6.8% per year. That wouldn’t be a fun experience as an investor but those numbers wouldn’t be bad for true long-term investors.

Missing a bull can be even more detrimental than taking part in a bear. Following the two huge bear markets we’ve experienced this century, many investors decided it was more important to protect on the downside than take part in the upside. Risk is a two-way street and I’m a huge proponent of risk management, but investors have taken this mindset too far. Missing out on huge bull market gains can set you back years in terms of performance numbers because you basically have to wait for another crash to occur, and then have the fortitude to buy back in at the right time. I have a hard time believing people who missed this bull market because they were sitting in cash will be able to put money to work when the next downturn strikes.

Stock market performance is lumpy. Emerging markets are a perfect example of this. The 10-year annual returns on the MSCI Emerging Markets Index through the end of 2017 were just 1.7%. But the 15-year returns were 12.3% per year. How could this be the case? The returns from 2003-2007 were other-worldly at 37% per year. This is an extreme example but it shows how lumpy stock market returns can be. If you jumped in after those huge returns in the mid-2000s you’re feeling the pain. If you’ve been a long-term holder of EM, these past 10 years have been challenging but the bull market returns that kicked things off have more than made up for the sideways market environment that’s followed.

These types of examples can be misleading. I like to say that you can win any argument in the markets by simply changing your start and end dates. I could have included 2008 in these results and the numbers would have been worse. Or I could have started from the exact bottom in early-March of 2009 (people forget the S&P 500 was down roughly 25% before bottoming in the first two months and change of 2009 and finished the year up around 26%) and things would have looked even better. I’m simply trying to show how damaging it can be to miss out on a bull market. Even the worst case scenario from here isn’t all that damaging to returns, assuming you can take the long view.

But investors need to understand that long-term returns encompass both good and bad markets. This is an obvious statement but it’s much easier to be a long-term buy and hold investor when things are going well.

The hold part of the equation becomes much more challenging when markets don’t go up in a straight line anymore.