The Great Financial Crisis in 2008 left an indelible mark on my psyche as an investor.

But it wasn’t the crash itself that has shaped me as an investor. It was the aftermath of the crash.

I joined the investment office of an endowment fund in July of 2007, just as cracks were beginning to show in the financial system. My first 2 years or so on the job were spent in survival mode as the financial system teetered on the edge of collapse.

It was a scary period to live through as an investor.

The future never completely lines up with the past but anyone who has studied market history knows crashes are typically followed by recoveries. That’s just how this works.

The problem I witnessed among most endowments and foundations is they couldn’t bring themselves out of the bunker mentality of the crisis. All of the so-called smart money continued to load up on hedge funds, tail-risk strategies and conservative investments following the crash.

I’m not saying I predicted the unbelievable returns we’ve seen since the bottom on March 20091 but it was bizarre to me how many institutional investors were creating more conservative allocations coming out of the crash than they had going into them. It was completely backwards for how you should wisely invest capital.

This is what happens though. Recency bias causes people to invest in the rearview mirror by constantly fighting the last war.

This same mentality was at work when people began calling the technology sector a bubble in the early-to-mid-2010s:

Everyone was still so scarred from the dot-com blow-up following the late-1990s boom that another tech bubble seemed like the obvious call. Instead the 2010s were dominated by the tech sector and anyone who got in the way of that freight train got run over.

I think we’re in a similar position right now in the housing market. Things are red hot in residential real estate. So people immediately fall back on the last time this happened and assume this has to be a bubble of epic proportions just like we saw leading up to the 2008 crash.

I’m can’t predict the future but if I had to guess we’re going to be hearing housing bubble calls for years to come just like we heard when people began calling the U.S. stock market a bubble around 2012.

The current supply shortage in the housing market is a perfect example of how a previous downturn can have an enormous impact on the next one. 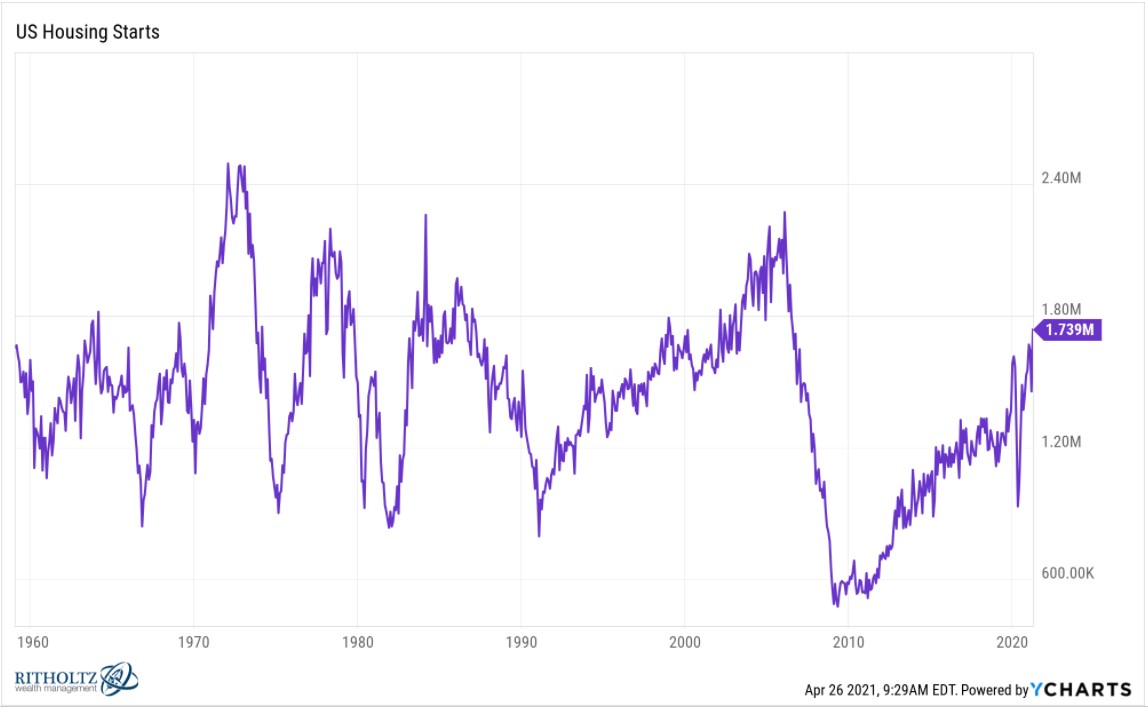 Housing starts fell off a cliff following the real estate crash because prices got crushed and builders got caught holding the bag. The market overcorrected and we went from too much supply to not enough in a hurry.

The hangover from the last housing crisis is perfectly encapsulated in the price of lumber, which is on an absolute tear:

Lumber prices are up so much that the price of building a new home has risen by an estimated $24,000.

Tracy Alloway and Joe Weisenthal interviewed Stinson Dean, a lumber trader, on Odd Lots to help understand the cause of the lumber shortage. This was my favorite finance podcast of the year so far because it hits on so many important themes when it comes to understanding the interplay between human nature and the macroeconomy.

There are a number of factors at play that have caused the massive spike in lumber prices but Dean explains how the previous housing bust completely changed the dynamics of this industry:

We’re [the lumber industry] more conservative than others because of what we went through in 2007 and 2008 and what we ignored in 2006 and 2007 and paid the piper in 2008. And we’re one of the sectors that still haven’t reached and eclipsed our peak if you just look at housing starts.

That’s very fresh in everyone’s mind. The names that are around right now are around because they were able to scrap, scrape and survive being in the epicenter of the great financial meltdown.

The same with the homebuilders. They’re paying down debt and they’re not aggressively going after land and they’re playing it safe. And it’s like ‘What are we doing here?’ We have this massive housing shortage but you can just feel how hesitant everyone is to believe it.

The mindset that helps you survive a crash is the exact opposite of what you need to take advantage of a boom.

The pandemic has given us an economic situation unlike anything we’ve ever seen before. We went from expansion to depression over the course of a few weeks after the initial shutdowns were put in place. And once the government stepped in to keep the economy afloat the recession was essentially over in a month or two.

Most industries, supply chains and corporations simply aren’t equipped to completely shut down production only to see demand come back in the blink of an eye. And when you combine this state of affairs with the scars from the last crisis, you’re going to get some weird economic outcomes.

So what happens during the next crash?

Will corporations be slower to cut production?

Will we actually see a supply glut in certain areas?

Will the government be quicker to send out checks to individuals?

Will investors be quicker to step in and buy when stocks fall?

No one knows of course but the Corona Crash is certain to cause a number of over- and under-reactions from corporations and investors alike.

Risk is always inherent in the financial markets and it’s never going away.

Unfortunately, we humans are constantly fighting the last war because our brains latch on to the most recent events when trying to predict the future.