Unless you were operating in the trading pits like Billy Ray Valentine in Trading Places, it was basically impossible to invest in commodities for the average investor until the 1990s. But no one really paid attention to commodities until the huge boom in the mid-2000s. Price tends to drive narratives so most investors felt they needed to load up on commodity funds to get in on the action. Since a broad basket of commodities peaked in 2007 or so it’s been a rough ride ever since. The following piece I wrote for Bloomberg looks at how investors and traders alike should view this asset class. (A few people emailed to tell me the chart I referenced in here from another source isn’t exactly accurate but the cyclical nature of commodities remains nonetheless.)

Investing in commodities is tough. Things are so tough, in fact, that many commodities traders are fleeing the business altogether.

The recent performance of these hard assets shows why this is the case. While U.S. stocks are up for almost nine years in a row, commodities are in the midst of a prolonged drawdown. A broad basket of commodities, as measured by the Bloomberg Commodities Index, is down around 5 percent this year. Although they were up double digits last year, commodities fell five years in a row from 2011 to 2015.

Over the past 10 years, the Bloomberg Commodities Index is down 6.5 percent per year for a total loss of almost 50 percent. Over that same time frame, the S&P 500 is up a total of close to 100 percent, or a 7 percent annual return. This difference in performance has led to a huge divergence in the ratio of commodities to stocks, which has compelled some investors to ask whether there is a buying opportunity in commodities.

The following chart shows the ratio of commodities to stocks going back to the early 1970s: 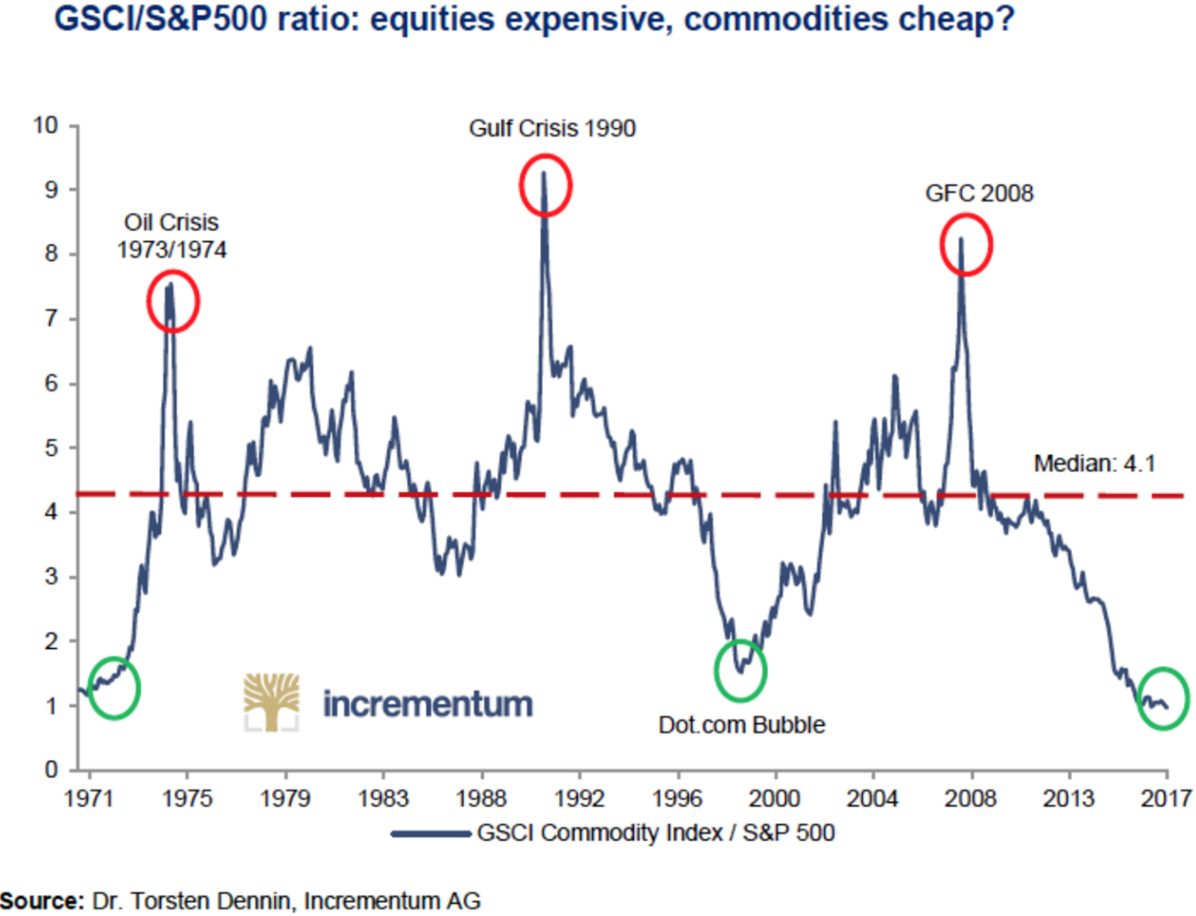 This ratio is currently at lows seen in prior buying opportunities in the early 1970s and early 2000s. It’s quite possible that we’re at the third inflection point over the past 40-plus years, but investors need to understand what they’re getting themselves into when thinking about commodities.

While the Goldman Sachs Commodities Index goes back to the 1970s, it was virtually impossible for investors to invest in a basket of commodities until the early 1990s, unless they held a seat on the futures exchange. The fact that there were far fewer speculators in commodities means it was much easier to take advantage of mispricing in the pre-1990s period. There are now hedge funds, institutional investors and ETFs investing in these markets, making it much harder to extract profits.

There is also no financial reason that dictates that commodities must exhibit mean reversion. They provide no dividends or income. They don’t have earnings. Commodities are more of an input than a financial asset. In many ways, a bet for commodities is a bet against technology and innovation.

The Bloomberg Commodities Index goes back to 1991. The performance statistics through June of this year show why commodities are a poor long-term investment compared with stocks and even cash:

These numbers make it clear that commodities do not make a great addition as a strategic holding for a long-term investor. This doesn’t mean, however, that commodities never represent a good trading opportunity. Look at the cyclicality of returns in the Bloomberg Commodities Index over the years: 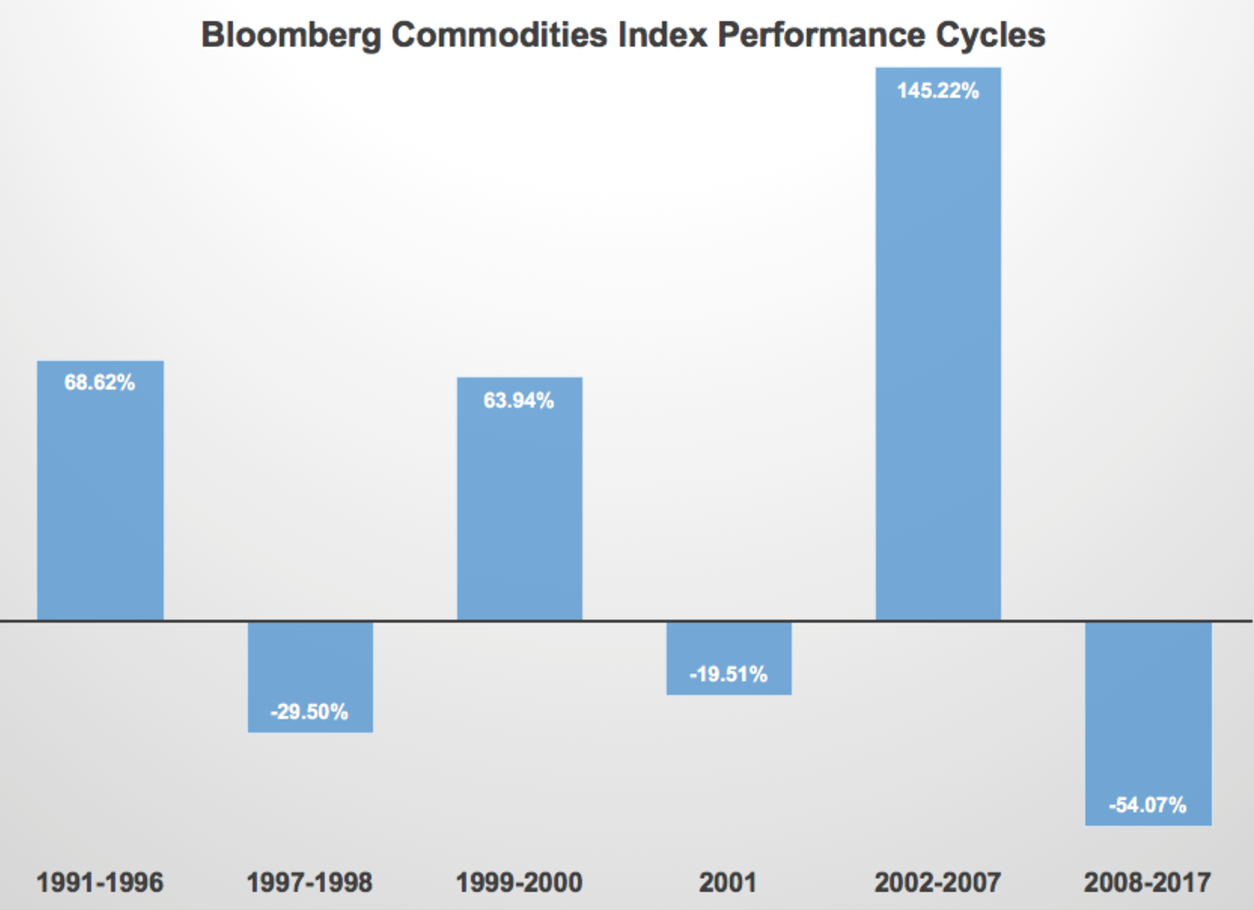 While the total returns ended up underperforming cash and inflation figures since 1991, there were enormous boom and bust cycles to get there from the increase in volatility. This provided traders with ample opportunity to either make or lose large amounts of money.

The problem with the cyclical nature of commodities is that the boom periods tend to invite long-term investors into the space, because they become enchanted with the size of the short-term profits. This is what happened to many investors in the mid-2000s as commodities had a huge run-up in prices. As it became easier to invest in the space more and more investors piled in. That has likely exacerbated the volatility in recent years as those gains have mostly been given back.

So even though it’s possible that commodities could be setting up for a huge reversal in the coming years, investors must understand what they’re getting themselves into. Over the long haul, you should expect commodities to track closely to the rate of inflation should technological progress continue to pay dividends for society.

Although commodities are likely a poor bet for long-term, buy-and-hold investors, they will still tend to offer traders profit opportunities on both the long and the short side, depending on where we are in the cycle. The problem is that it’s very difficult to call the turning point in these markets as painful downturns can always see more pain ahead.