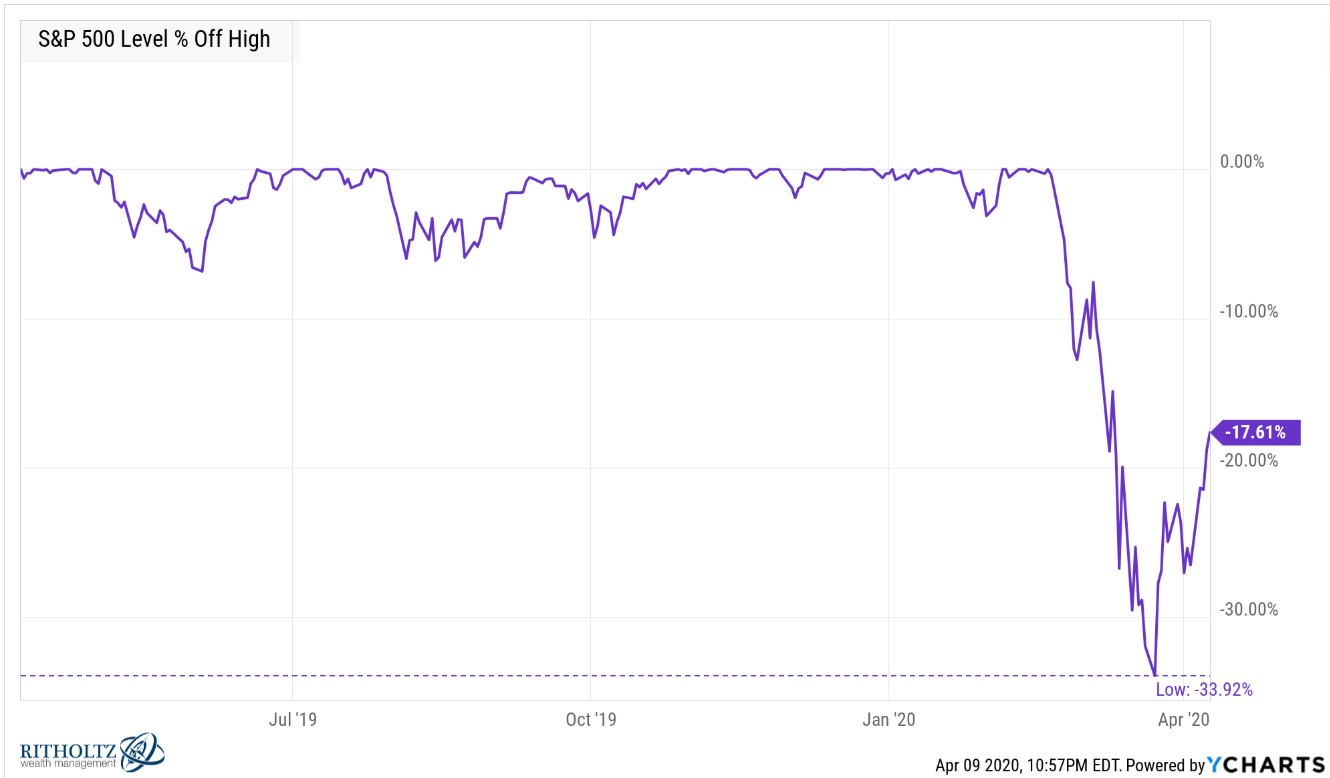 This is confusing to many investors for a number of reasons:

I understand the confusion. Markets are seemingly detached from reality at the moment. If you’re not confused you’re not paying attention.

But there are also more coordinated fiscal and monetary rescue measures going on right now than at any time in history. The Fed just announced this week they will:

This is in addition to taking short-term rates down to zero, the $2 trillion fiscal rescue plan and all of the other measures they already have put in place over the past few weeks (with hopefully more on the fiscal side to come).

The economy has been put on ice but the Fed and the government are throwing trillions of dollars to (hopefully) thaw it when the time comes.

I don’t know how this experiment will unfold. Anyone who tells you they do is either delusional or lying.

It’s still far too early to say but let’s assume for a minute March 23rd was THE bottom. I’m not saying this is a fact but let’s say the Fed and the government somehow thread the needle and do enough to keep investors happy during this economic calamity.1

This outcome would be pretty difficult to reconcile with an economy that could experience a contraction that could rival the Great Depression.

I can’t prove this with 100% certainty, but in the past when the Fed either didn’t have the tools (or didn’t use them as they are today) and the government didn’t spend 10% of GDP to help out on the fiscal side of things, the stock market likely would have fallen 60%-70% in this situation.

Many people think this will still happen this time. Maybe they’re right but if not this could have ripple effects on the U.S. stock market going forward.

If the stock market during the worst economic contraction in 90 years can be smoothed out by government spending and Fed actions, does this change the risk-return framework in the stock market going forward?

Said another way — if stocks don’t have the risk of a Great Depression-like crash on the table, does that mean expected returns should be lower going forward?

Looking at valuations over the long-term, you could make the case that the market has been pricing this in for some time now. Robert Shiller has pieced together U.S. market data going back to 1871 to calculate his cyclically-adjusted price-to-earnings ratio.

This valuation measure is far from perfect but it is telling to see how the averages have changed over time: 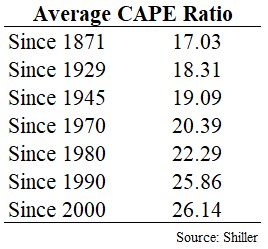 There is an obvious upward move in the average over time. There are a number of explanations for this increase — interest rates and inflation have fallen over time, accounting rules have changed on corporate earnings, the underlying structure of the market has changed (think more tech companies), the U.S. economy and markets are more mature, etc.

But another reason for this is the Fed now plays a larger role in the economy and management of the financial system, and thus, financial assets. If the stock market is “safer” over time, in that the Fed will do its best to smooth economic cycles, it would make sense that valuations should rise over time.

I don’t know who invented the P/E ratio but I wish they would have called it the E/P ratio instead. Price-to-earnings just gives you a number that’s tethered to nothing but earnings-to-price gives you a yield. Here are those same averages shown as the inverse or earnings yield: 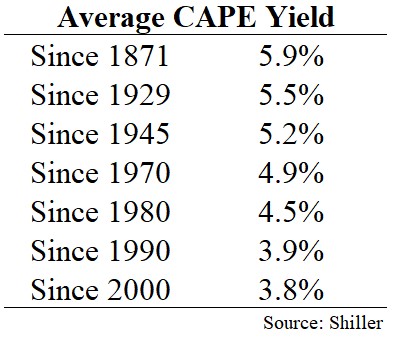 Earnings yield don’t tell you exactly what future returns will be but this shows investors have been willing to pay more for profits over time.

There are legitimate reasons for this but theoretically, this should mean lower expected returns.

The Federal Reserve has shown in the past two crises they will likely be more involved in the markets than ever before. I don’t expect this to change anytime soon. If anything, their involvement will only increase in the future.

Unfortunately, although it’s possible when the Fed takes something like a Great Depression-esque 85% crash, they may be adding other risks to the system.

Risk can change shape but it never completely goes away.

Markets have become more micro efficient over time in that it’s getting harder to outperform based on security selection alone. There are simply many more professional investors out there today than there were in the past.

But you could argue markets may becoming more macro inefficient at the same time. While a monster crash may be off the table2 it’s possible we see more crashes that don’t reach that magnitude.

In essence, making the system safer in some ways could be making it riskier in other ways.

One positive between now and the past when dealing with the markets is the fact that the costs of investing were so high in the past, that could be one of the reasons valuations were so much lower. Equity investors needed the promise of higher expected returns to account for a higher cost of doing business and the higher risk inherent in stocks back then.

The fact that the U.S. has dominated the past 100 years or so in terms of markets and the economy could actually be part of the reason that dominance won’t continue as much going forward.

I could be wrong. Things could get far worse as the economic pain continues. Nothing would surprise me at this point.

But if the Fed has effectively taken enormous risk off the table there could be unintended consequences for the markets going forward.

1The virus could be with us for a while and no one knows how people or businesses will react when some parts of the economy get back to normal. It wouldn’t surprise me if stocks tested their lows in the months ahead and went down even further. This is a thought exercise under a scenario where that may not happen.

2Again, I’m theorizing here. I reserve the right to be wrong on this one but this crisis will be a good test case for this theory.