There’s never been a better time to be an individual investor. Fees and commissions continue to drop. There are more options than ever for investment products, strategies and fund structures. And there’s an unbelievable amount of quality research and commentary about saving, investing, retirement and the markets available for free.

Two of the most heavily covered topics in this area are index funds and robo-adviors. There’s another one that doesn’t get nearly enough attention considering how important it is as a retirement savings vehicle — the target date retirement fund.

The main reason TDFs are so important to retirement savers is because of a rule change in the Pension Reform Act of 2006 which requires workplace retirement plans to provide a legitimate default investment option for their employees who sign up. In the past, most of these plans would default to a fixed income or stable value fund. Most people don’t know how to pick their own funds or rarely make changes to their investment options, so this made it difficult for people to know where to begin when they started saving.

TDFs were named as an acceptable default option which has caused enormous growth in these funds ever since. In a recent report on TDFs from Vanguard, they outlined how this change to a default option has affected the retirement savings market as 88% of all plan sponsors now offer these funds, with 64% of participants on Vanguard’s platform using them.

Here are a few more stats on the TDF space courtesy of my pal Jeff Ptak of Morningstar: 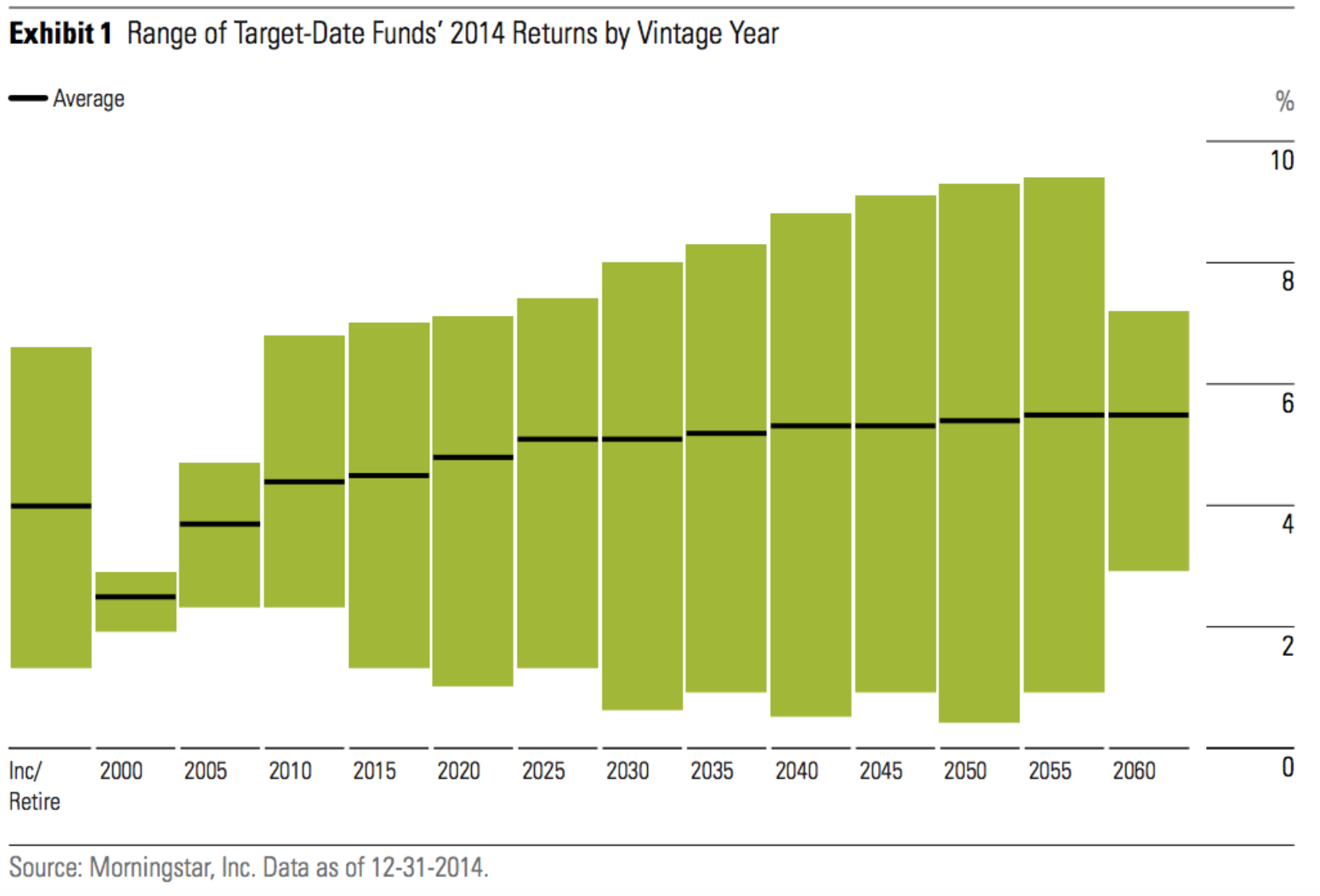 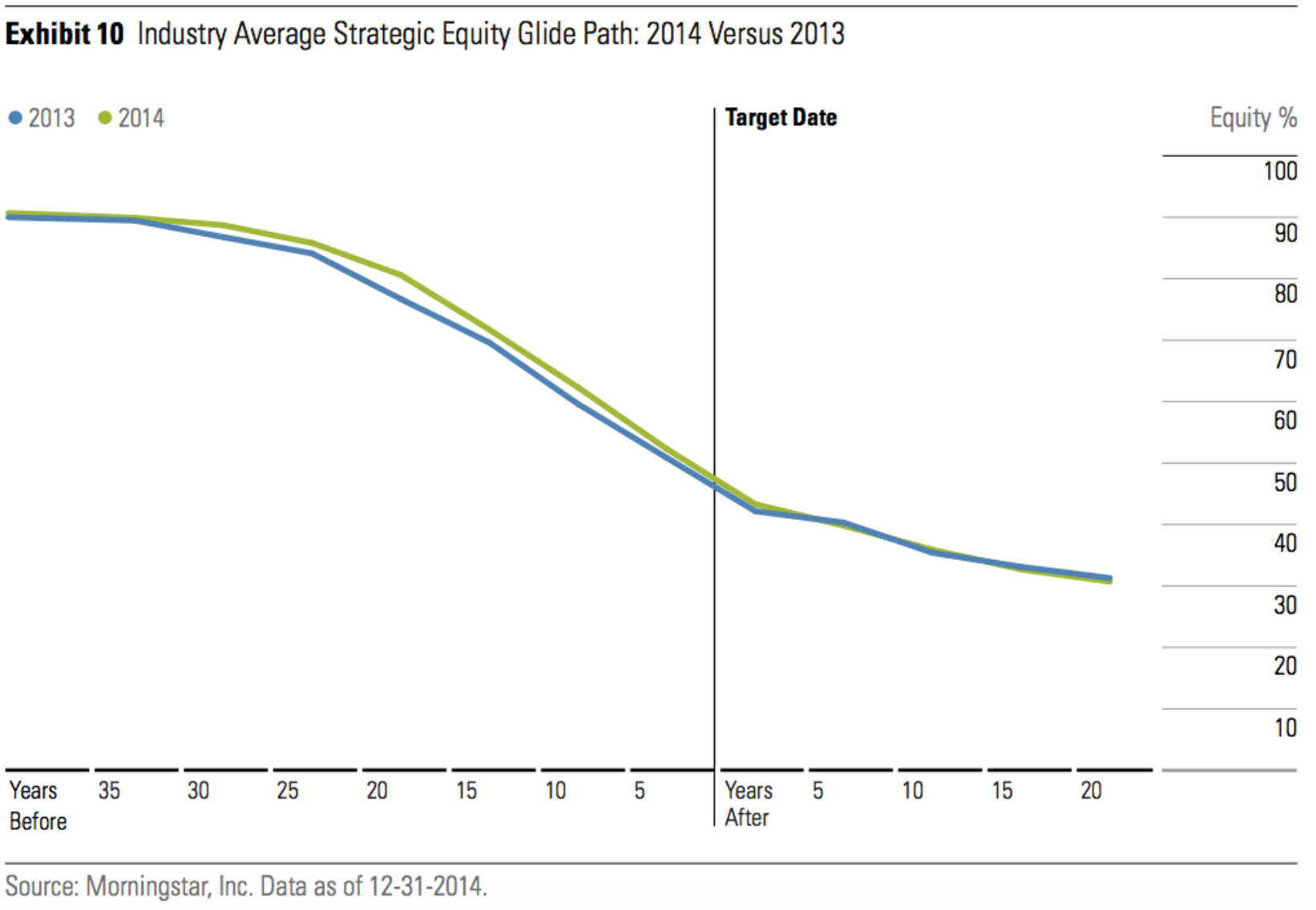 TDFs aren’t perfect. You can’t customize these funds to suit your exact needs or asset allocation preferences. There’s no one there to hold your hand or explain exactly how these funds work (retirement advice varies by plan sponsor and is often severely lacking). Many TDFs are filled with a collection of high fee funds. The allocations and glide paths for allocation changes vary among the various TDFs.

And it’s not just the default investment option that’s causing the massive growth in the space as half of all individuals in these plans who are in TDFs are doing so with their own investment choices. I’ve had countless people over the past few years tell me they have no idea what they’re doing when trying to manage their retirement assets so they simply chose a TDF to simplify the selection process. As with all strategies, you’ll always be able to do better, but it’s much easier to do worse.

This is one of the under-rated aspects of these funds. It’s one fund (really, a fund of funds). If nothing else, it’s a great way for investors who are just starting out to gain exposure to a diversified portfolio without having to figure out the specific holdings themselves. TDFs make for a great starter fund. The fund company does all of the rebalancing for you. They choose the funds. They make asset allocation changes over time.

TDFs aren’t made for high net worth individuals or those looking to actively manage their portfolios. But for the most part they are a great option for the average individual investor who doesn’t have any other options or sources of financial advice.

As financial nudges become more prevalent in trying to help people save more for retirement my guess is the default investment option will become a very competitive marketplace. I wouldn’t be surprised to see ETF providers, financial advisor model portfolios and robo-advisors make a huge push in this area in the future. Until then, it appears TDFs have the market cornered. The average retirement saver would be wise to pay attention to these funds to better understand what they are investing in.

Creating a viable default investment option for retirement savers was a great first step in improving things for those who are clueless about investing or those who want to simplify their savings strategy. I’ll be interested to see how this evolves in the coming years and decades to see how much we can improve the retirement system, which is badly in need of some help.

Sources:
2015 Target-Date Fund Landscape (Morningstar)
From the Mind of the TDF Investor (Vanguard)