New York Magazine had a profile of eccentric billionaire hedge fund manager David Shaw this past week. Shaw and his wife concocted an elaborate rich person strategy to ensure their kids got into one of the best colleges in the country:

Starting in 2011, when the oldest of their three children was about two years away from applying to college, the Shaw Family Endowment Fund donated $1 million annually to Harvard, Yale, Princeton, and Stanford and at least $500,000 each to Columbia and Brown. The pattern persisted through 2017, the most recent year for which public filings are available, with a bump in giving to Columbia to $1 million a year in 2016 and 2017. The foundation, which lists Kobliner as president and Shaw as treasurer and secretary, has also contributed $200,000 annually to the Massachusetts Institute of Technology since 2013.

The total donations for “general” purposes across seven years and seven elite schools are $37.3 million, which represents 62 percent of the foundation’s giving over that period. At minimum, experts in higher-education fund-raising say, Shaw and Kobliner’s strategy improved their children’s chances of getting into at least one of the country’s top universities. At best, it would allow them to choose whichever blue-chip school they preferred, making selecting a college as easy as ordering from a take-out menu.

I suppose this is another form of diversification but I’m struggling to figure out how this is any different than what Aunt Becky did by bribing her kid’s way into college.

I went off on a little tangent on the podcast this week about rich people who give money to rich schools:

Listen, I get why they do it. Rich people like to have their names on buildings or have the sway to get their kids into the best schools. It makes sense from the ego/power/family perspective.

But I just don’t get why so many of these same schools need to have so much money in their endowments if they’re constantly getting big donations. Here’s a look at the top 30 college endowments by assets as of June 30, 2018: 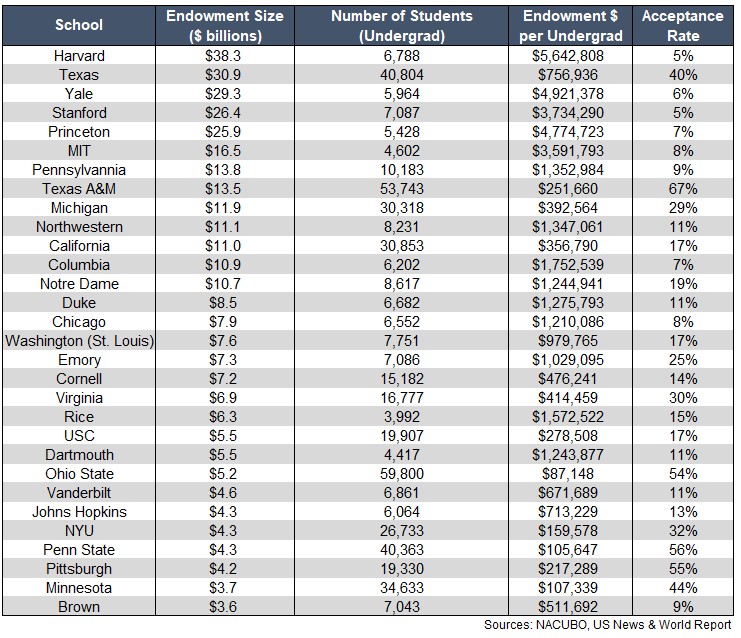 Now let’s break this list down even further by looking only at those schools on this list that have $1 million or more per undergrad in their endowment fund:

A little more than half the list drops off. The remaining names are some of the best schools in the country. Just look at some of those single-digit acceptance rates.

Relatively speaking, Harvard’s endowment has been a mess over the past decade or so (especially from a governance perspective). It didn’t matter. They still have by far the biggest endowment and boast nearly $6 million (!!!) per undergrad who attends the prestigious university. Harvard is also one of the biggest landowners in the state of Massachusetts and it does so on a tax-free basis.

One of the reasons the Ivy League endowments are so large in the first place is because many of them have been unbelievable investors over the past 20-30 years (even though the 10 years numbers have come down on a relative basis). You can’t blame them for having such wonderful long-term returns.

And I know many of these schools do wonderful things in terms of research and such with some of this money.

But do they really need their endowments to be so large? Couldn’t they expand their student base and let in more kids? Maybe do away with some of the exclusivity in acceptance rates? And why do so many rich people continue to give so much money to schools that are already swimming in it?

I know there’s a lot of nuance to this discussion that I’m glossing over but I don’t like the idea of a select group of schools who already have a leg up on the competition using their sway with rich alumni to build up their coffers and receive huge tax breaks on top of it. The students at these schools are already going to make more money than most college grads.

Wouldn’t this money do more good for other schools or causes that actually need it?

Now here’s what else I’ve been reading this week:

*There was a provision in the new tax laws of 2017 that levied a 1.4% tax on investment income for those endowments that have more than $500,000 per student in their endowment. I’m not sure this is enough to get people to change their behavior on this.