I’m just saying we’ve had a hurricane behind us for 30 or 40 years, and it’s reversing, and I wouldn’t be surprised — in fact, it’s my central forecast — the Dow won’t be much higher in ten years than it is today.

Druckenmiller has been publicly bearish for many years now but a lost decade in the stock market has happened in the past and will probably happen again in the future. This is the nature of risk assets.

However, I don’t necessarily agree with his assertion that we’ve had the wind at our backs for 30-40 years.

Yes, the 12-15 months following the pandemic crash was one of the easiest periods ever to make money in financial assets. And we did have a bull market from 2009-2021 that gave investors in U.S. stocks amazing returns.

But the past two decades and change have been anything but easy for investors.

We’ve now had two bear markets for the S&P 500 in less than three years. That’s the first time this has happened since the Great Depression. 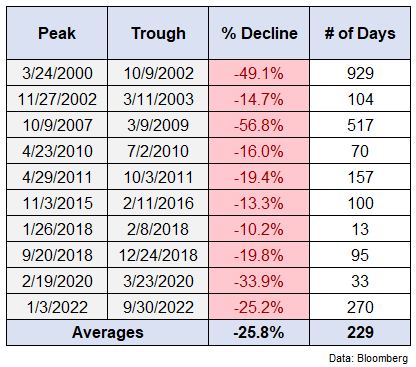 That’s in addition to the lost decade of the 2000s which saw the S&P 500 offer investors negative total returns from 2000-2009 while the market got cut in half not once but twice.

History is chock-full of crashes, crises and calamities in the financial markets. Read a history book or three and you understand every generation has had to deal with challenging times.

But you could make the argument that the past 20+ years or so have been more challenging than you think.

We have had four legitimate bear markets over the first 23 years of this century. There were just two bear markets in the previous 23 years from 1977-1999: 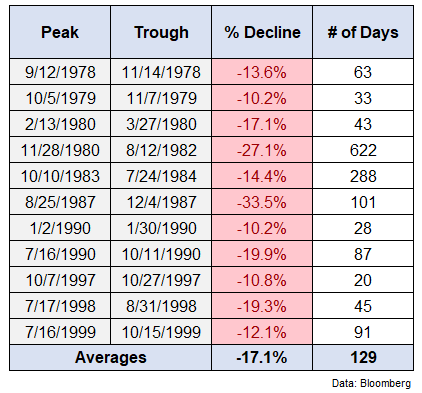 The 1987 crash was terrible but that year actually saw the stock market finish in positive territory and the market blasted higher from there for a number of years. The early-1980s bear market was similar to the current iteration in that it was more or less caused by the Federal Reserve and high inflation but that downturn marked a generational buying opportunity.

Corrections have gone deeper and lasted much longer this century. Plus the stock market has experienced 40% higher volatility this century.

This becomes even more apparent when you look at the calendar year returns: 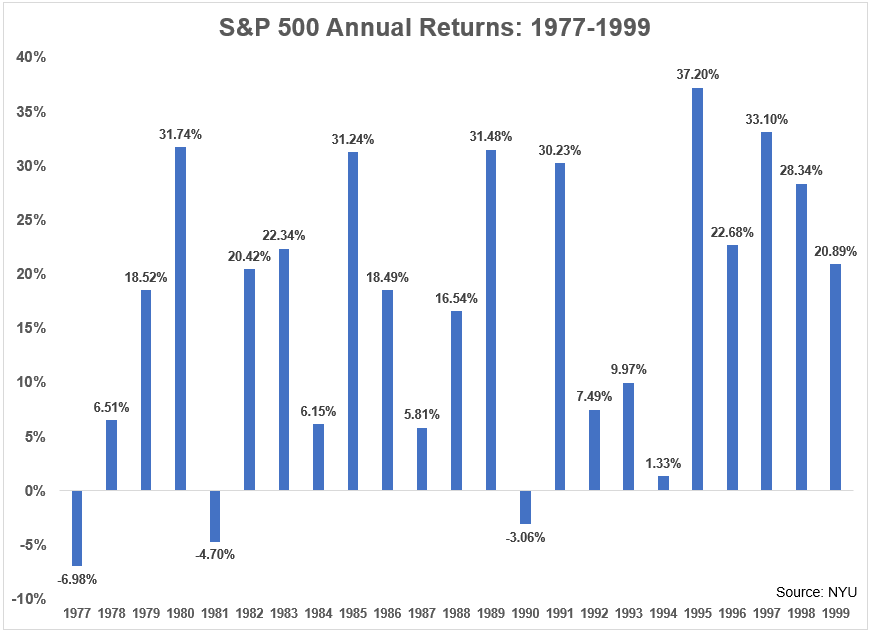 From 1977-1999, there were just 3 down years on a total return basis for the S&P 500. The market was up 20% or more in nearly half of all years and didn’t have a single year that finished down double-digits. 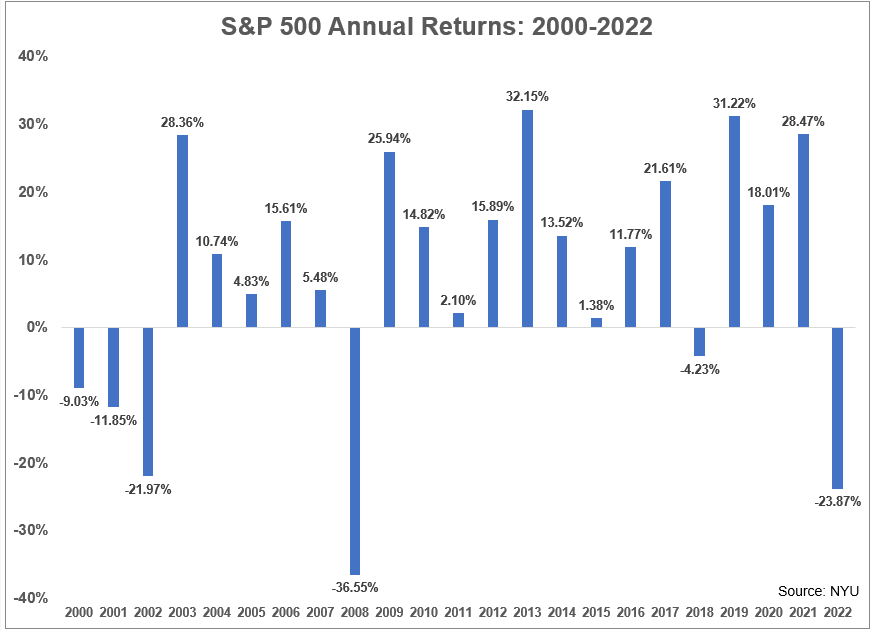 There have been six down years, four of which were down 10% or worse. There have only been six years with gains of 20% or more and if 2022 stays where it is we could see three years of 20% losses or worse.

Returns were obviously much better in the 1980s and 1990s in the stock market but the same was true for bonds and cash as well:

Anything you put your money into did well. Investors could actually earn a yield on their safe investments. Bonds and cash both did better from 1977-1999 than stocks have done since 2000.1

Now, you could quibble with my starting point here. The year 2000 might turn out to be the worst entry point for U.S. stocks in history (even worse than the Great Depression). You could say I’m cherry-picking if you want to.

After all, the early-1980s was a time of high interest rates, high inflation and low valuations. Over the 1980s and 1990s, rates went lower, inflation fell and valuations rose.

It was a wonderful time to be an investor.

But this century has not been quite as wonderful.

Investors have also had to grapple with 9/11, wars in Iraq, Afghanistan and Ukraine, the insurrection at the Capitol, the Eurozone crisis, the worst pandemic in over 100 years and now the highest inflation levels in 40 years.

Is a lost decade in risk assets a legitimate risk for investors? Certainly. It has happened before and will likely happen again in the future.

But I don’t buy the fact that investors have somehow had the wind at their backs for 40 straight years.

If you think the past two decades have been easy for investors you haven’t been paying attention.

Further Reading:
You Are Not Stanley Druckenmiller

1This is not to mention returns have been ever worse for foreign stocks.