One of these things is not like the others.

I’m not a gambling man but I think I’d take the under on this one.

In short, the nosebleed valuation levels stock reached in the late-1990s could prove to be the worst entry point in stock market history.

Obviously, the market got cut in half from 2000-2002 and again from 2007-2009. When looked at from this perspective, close to a 5% annual return actually isn’t that bad, especially when you factor in that the CAPE ratio topped out at the end of 1999 at more than 44x the average of the trailing 10 years’ earnings. The inverse of that P/E ratio would have been an earnings yield of just 2.3%.

I’m also having some fun with numbers here by choosing such a terrible starting point. The 35 year annual return from 1984 to 2018 was a total of 3433% or 10.7% annually. So even with the 1987 crash, dot-com blow-up, and Great Financial Crisis, this period has still given investors double-digit returns. 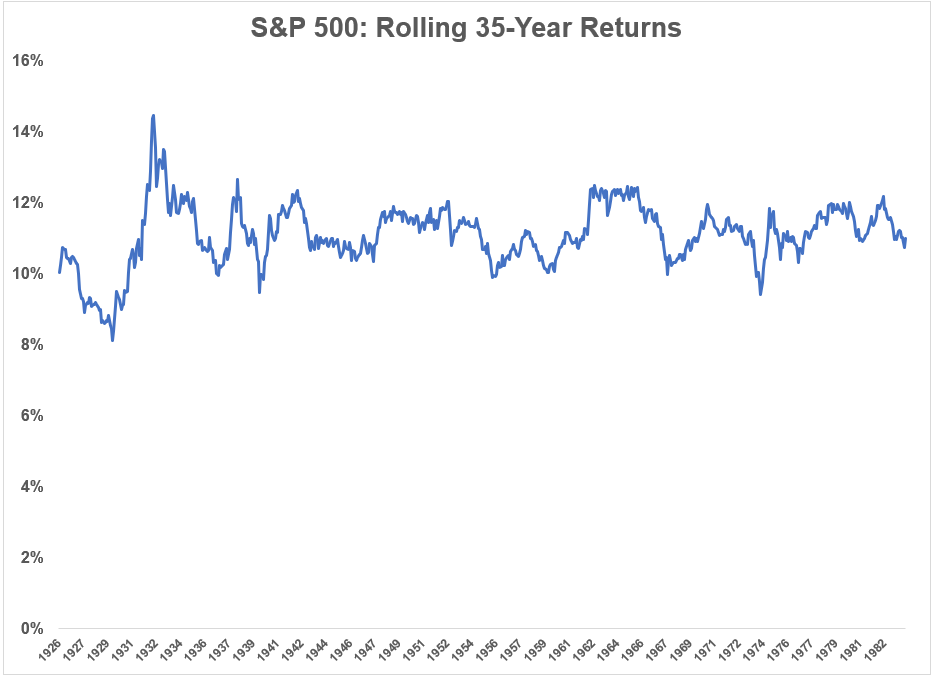 The years on the bottom of the graph correspond with the starting year for the ensuing 35 year period. The worst entry point for the next three-and-half decades was unsurprisingly September 1929. But even investing at the peak of the market in 1929, just before the greatest crash in U.S. history, stocks still returned 8.1% over the next 35 years.

For stocks to reach that 8.1% annual return level for the 35 year period from 2000-2034, the S&P would need to show an annualized gain of around 12% a year over the next 16 years. Never say never, but this seems like a stretch considering how well the past 10 years have gone. We would basically need a repeat of the 1990s to get there.

So it looks like the year 2000 will go down as by far the worst entry point in the U.S. stock market over the past 100 years or so, eclipsing even the peak of the market before the ~85% decline in stocks that began in 1929.

However, it is worth pointing out these numbers assume reinvestment of dividends to get those total returns. Most people didn’t, or more likely, couldn’t reinvest their dividends back then. It’s also true that the cost of investing was substantially higher for the bulk of this time frame. So while gross returns in the modern landscape may look much lower than they did in the past, after all costs, fees, and spreads are taken into consideration, today’s returns may not be as bad on a net basis in comparison.

You also have to remember that no one put every dollar they had into an S&P 500 index fund on January 1, 2000. Most people slowly invest their money periodically over time. They also own other asset classes, geographies, and strategies.

(Hat tip to reader Joe Kurtz for the idea on this one.)