We’ve been in a bear market for a while now but never reached the technical definition of a 20% peak-to-trough drawdown in the S&P 500…until yesterday that is.

This is now the 13th decline of 20% or worse since World War II: 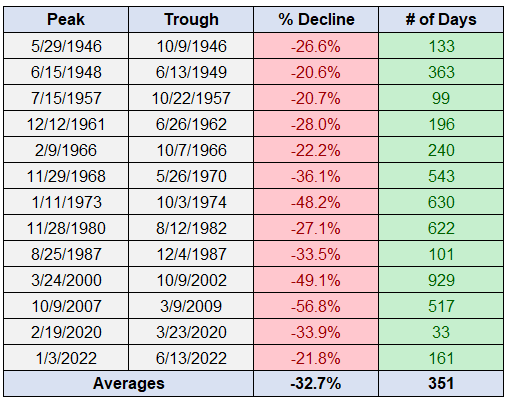 It’s currently the 9th longest bear market of the past 80 years or so.

The median decline for this herd of bears is -28% lasting 240 days.

All of these bear markets are unique in their own ways but this one has proved to be challenging on a number of fronts.

The Fed is feverishly trying to raise interest rates to tame inflation but market rates aren’t waiting around for the Jerome Powell and company to act. 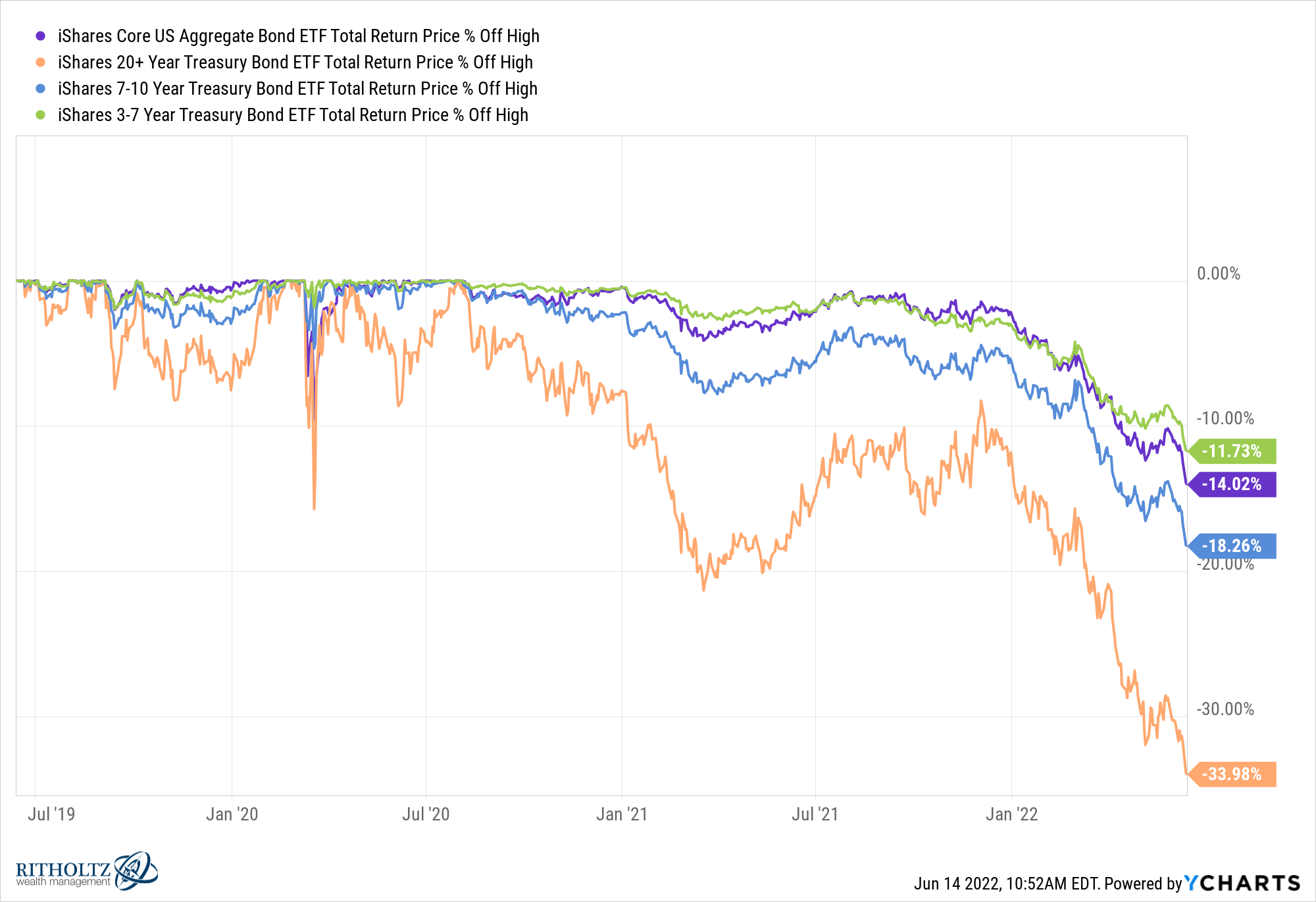 It’s telling that long-term bonds are in a bigger drawdown than any of the major stock markets right now: 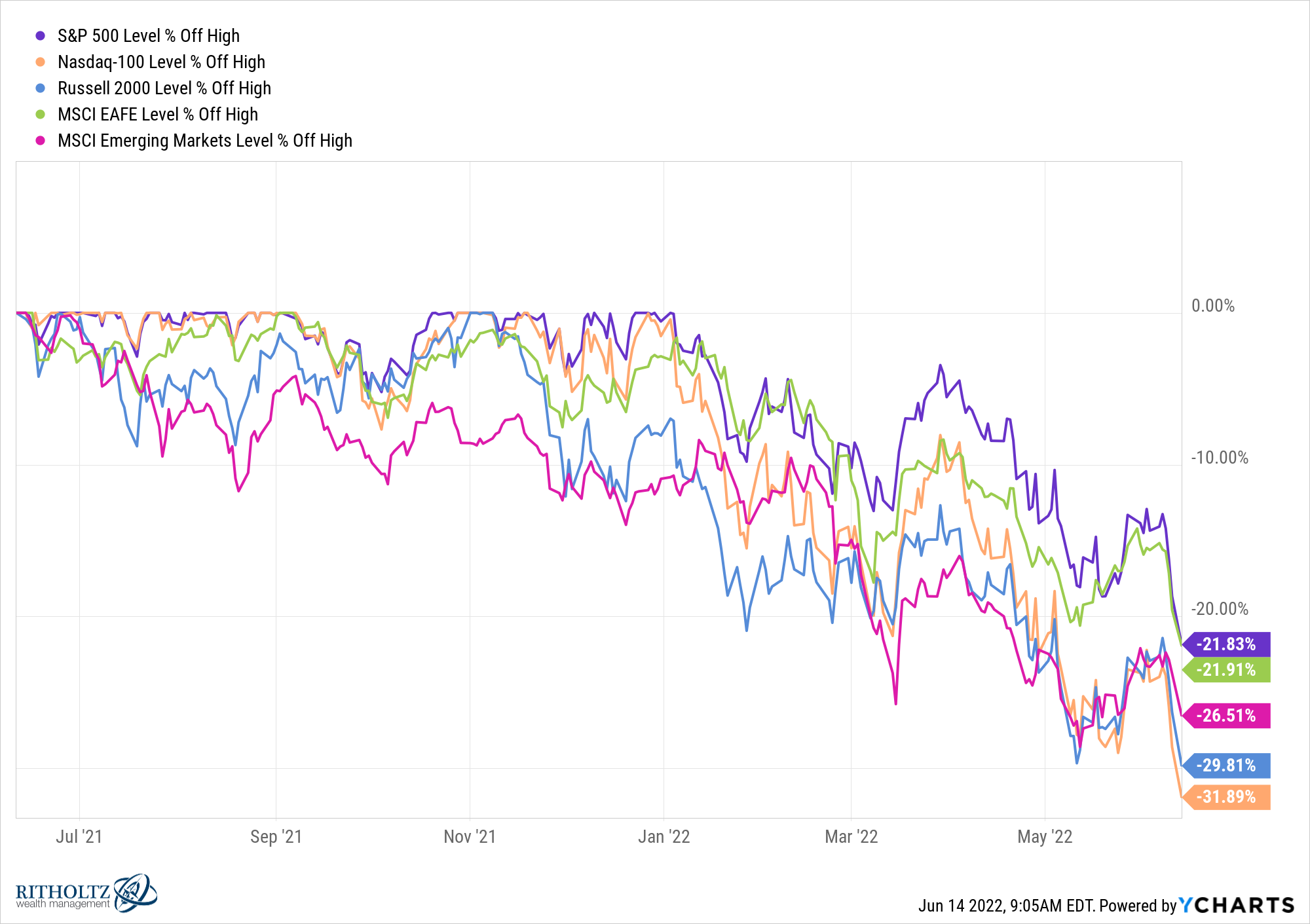 This makes sense when you consider the massive moves in interest rates this year.

These were the rates to start the year in January 2022:

And those same rates now:

We’re coming off a low base and inflation is still running much higher than interest rates but this is a massive move in a very short period of time. Usually the Fed comes to the rescue during a bear market. This time around, they’re causing it.

This bear market is certainly unique in terms of the bond market selling off alongside stocks but it does share some similarities to past bear markets.

Here is a look at how the current bear market matches up with the previous iterations in terms of interest rates and inflation at their peaks: 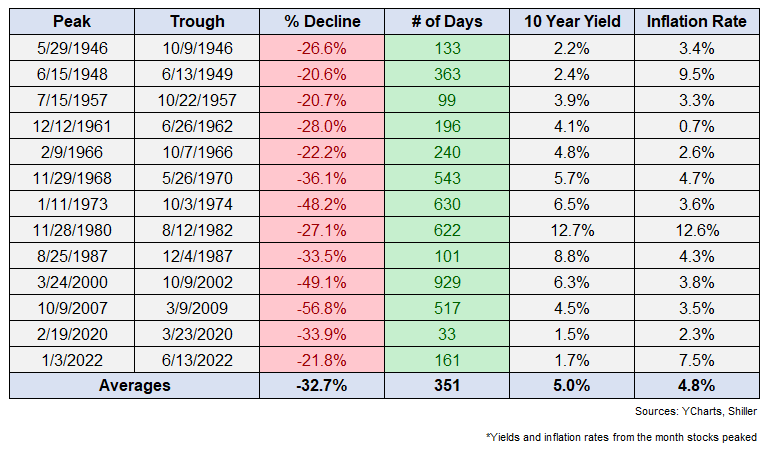 Following the wartime spending of the 1940s, inflation spiked but rates were relatively low.

But that was a much different economic environment and people were used to experiencing bouts of inflation.

The 27% bear market of the early-1980s was caused by Paul Volcker and the Fed to bring down runaway inflation from the 1970s.

But that was a much different interest rate environment and inflation had been high for more than a decade.

I like looking back at history to show that there is always a light at the end of the tunnel. Bear markets and recessions are a feature, not a bug, of this system.

However, this bear market feels different than anything we’ve experienced before. You have the aftershocks of the pandemic, a scorching hot labor market, interest rates that have effectively doubled in less than 6 months, war, record gas prices, record housing prices and a stock market that doubled in record time coming out of the last crash.

There are a lot of investors right now who believe this is a 2008-type event in the making.

Others believe this whole thing could be overdone if inflation is close to a peak.

I tend to get more bullish when stock prices are falling because it means expected returns are rising but am well aware I have no idea what the future holds.

Bernard Baruch once said, “Become more humble as the market goes your way.”

I think you should become more humble when the market is going against you as well. When human emotions grab the steering wheel it’s hard to say what’s going to happen.

This is my 45th consecutive year as a Chief Investment Officer. In 45 years I’ve never seen a constellation or frankly studied one where there’s no historical analogue. Right now I probably have more humility in terms of my views going forward than I’ve ever had.

Things seem pretty terrible right now in the economy and the market but that doesn’t make it any easier to predict what comes next.