The 2007-2009 economic crisis was an all-time horrible situation not only for all of us normal people who had to live through it but also those central bankers who had to figure out how to save a sinking ship.

They basically threw the kitchen sink at the problem and we’re all better off for it at the moment. While this situation couldn’t have been easy to navigate, I’m not sure this is the worst-case scenario for the Fed. They had no choice but to react in an unprecedented manner and I’m not sure the choices they made were all that difficult considering the alternative.

The situation in the late-1970s that newly initiated Fed chair Paul Volcker faced seems far more difficult. He had to decide between allowing crippling inflation or forcing the country into not one, but two recessions.

Volcker passed away in recent weeks. Here’s a piece I wrote for Fortune about the economic and market situation he inherited back then.

Former Fed Chairman Paul Volcker passed away on Sunday at age 92. Volcker is well-known as the Fed Chair who finally killed off the nasty inflation of the 1970s when he first took over the position in August 1979.

Save for Eugene Meyer, who took over as head of the Fed in 1930, at the onset of the Great Depression, Volcker may have taken over the job as central bank chief during one of the worst market environments the Federal Reserve has ever had to grapple with. In many ways, the U.S. economy was still recovering from the brutal recession and bear market of 1973-1974.

Unlike the recent recovery we’ve experienced in both the economy and the stock market in the years since the Great Recession of 2007-2009, the latter half of the 1970s offered investors and consumers little relief.

The S&P 500 was at the exact same level in the summer of ’79 when Volcker took over as it was during the fall of 1968. The stock market basically went nowhere for a dozen years or so. 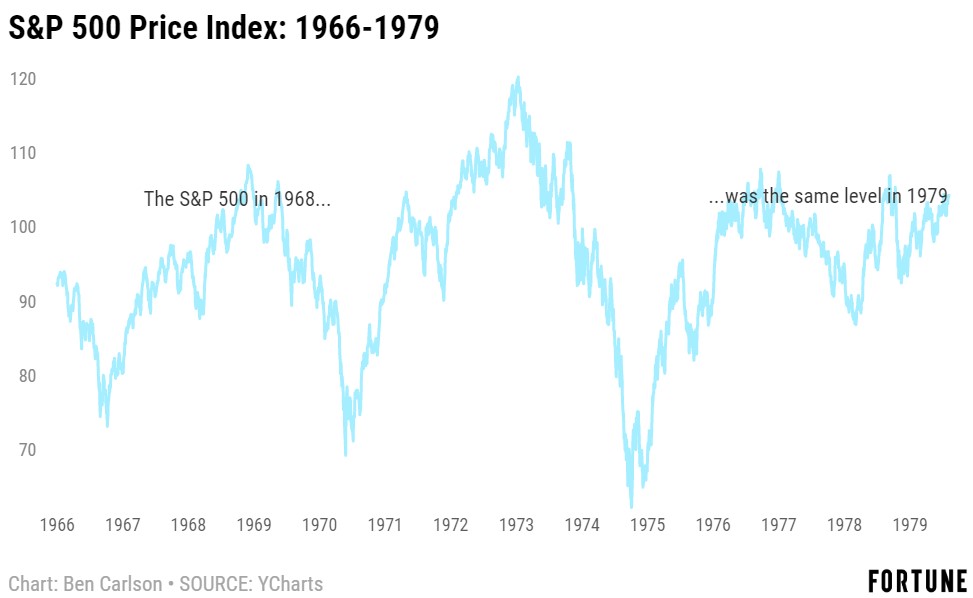 To be fair, this chart is showing price returns only, not total returns with dividends reinvested. Dividend yields were much higher in the 1970s than they are now. From the start of 1966 through July, 1979, the S&P 500 did eke out annual gains of 4.8%. That’s not terrible, but those gains were more than offset by the sky-high inflation of the 1970s. After accounting for inflation well in excess of 6% from 1966-1979, on a real basis, the S&P 500 was actually down a total of more than 18%, or real annual losses of 1.5% per year.

Not only was inflation high leading up to Volcker’s tenure as Fed Chair, but it was heading to rates never seen before during modern economic times. 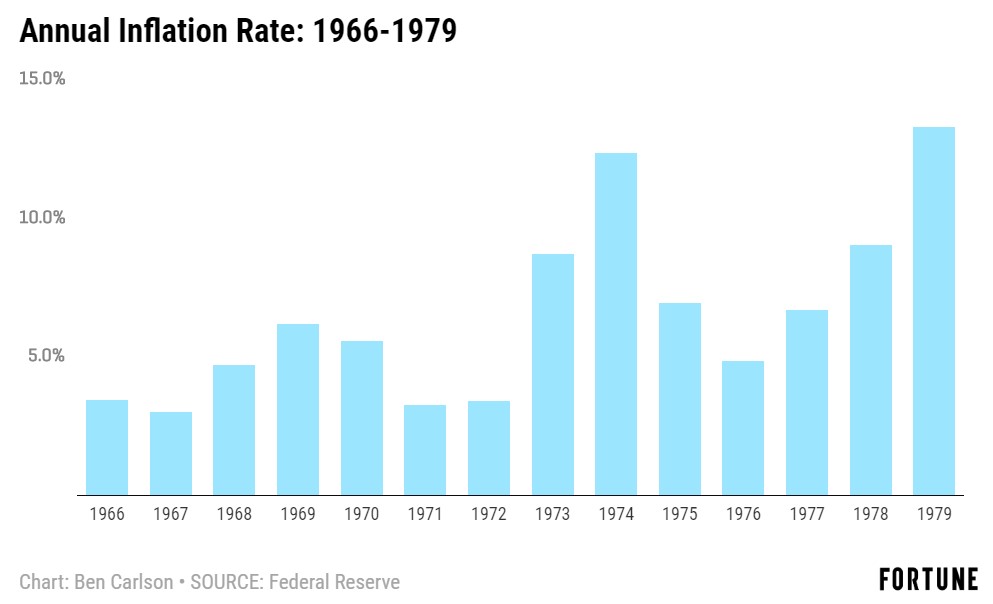 Because interest rates are so low these days, many investors worry about what happens if and when rates rise substantially. This is something of a chicken-or-egg question. The key point: inflation is far more damaging to stock and bond portfolios than rising rates.

The inflationary period Paul Volcker inherited was bad for stocks, but inflation is also a killer for the bond market. Interest rates tend to rise when inflation rises and this period was no different. From the start of 1966 through the summer of 1979, 10-year treasury yields roughly doubled from 4.6% to 9.0%. 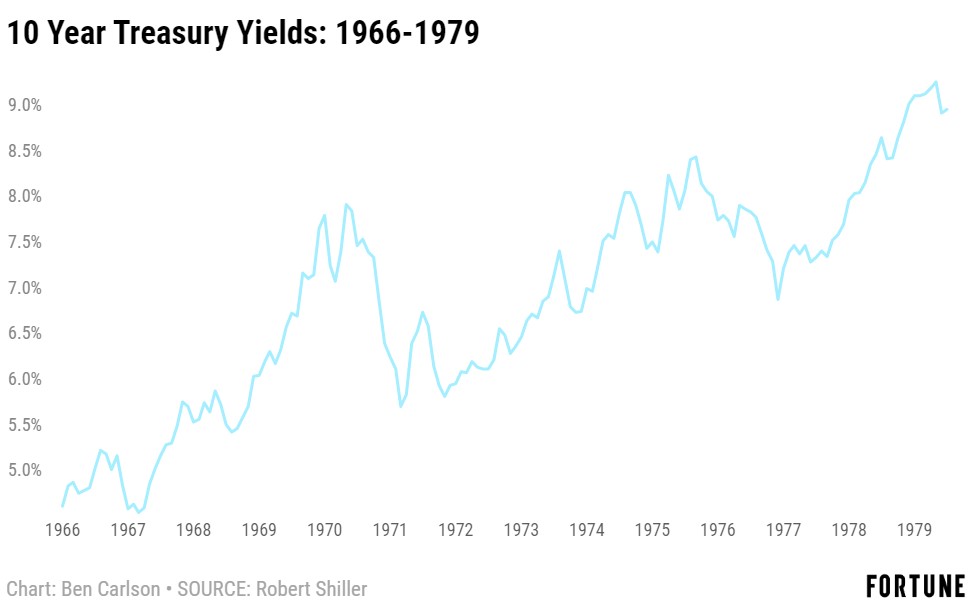 Bond prices and interest rates are inversely correlated so you would expect bonds to get crushed in this type of environment. Surprisingly, that wasn’t the case. Rising rates do cause bond prices to fall in the short-term, but this also means fixed income investors receive a higher yield along the way. So nominal annual returns were actually pretty decent during this time, all things considered. Annual returns for 10-year treasuries were 3.8% from 1966-1979. Again, it was inflation that did the damage here. Real after-inflation returns during this 14-year time frame were -33% in total, or a loss of almost 3% annually for bonds. Inflation can be a killer for fixed income investors over the long haul.

Volcker and the Fed eventually snuffed out inflation by taking the Fed Funds Rate to 20% or so in the early-1980s. I’m not sure we would have the political will to try such a move in today’s world; inflation didn’t go away without some pain to the economy in the meantime.

There were two recessions in a three-year-span just after Volcker took over the top post at the Fed. The first downturn was a 6-month recession in 1980 which was followed up by a recession in 1981 that spilled over into 1982 and lasted 16 months. In fact, from the start of 1980 through the end of 1982, the United States was in a recession for 22 out of 36 months or more than 60% of the time.

The rest, as they say, is history. High rates and inflation caused stock market valuations to fall to levels not seen in generations. Interest rates have taken the stairs down ever since the early-1980s, causing a bond bull market that is fast-approaching four decades. Falling rates and a disinflationary environment since 1982, meanwhile, has also meant wonderful returns for the stock market. The S&P 500 is up close to 6,400% or nearly 12% per year since 1982.

It’s hard to believe anyone could have predicted the painful economic and market environment of the 1970s and early-1980s would lead to such a wondrous period for stocks, bonds, and inflation ever since then. Paul Volcker pushed the economy into a recession to get us there. Investors who have benefitted from the difficult choices he made back then should thank him.