The cover story in January of 1968 for Institutional Asset Management was called The whiz kids take over at Wellington. 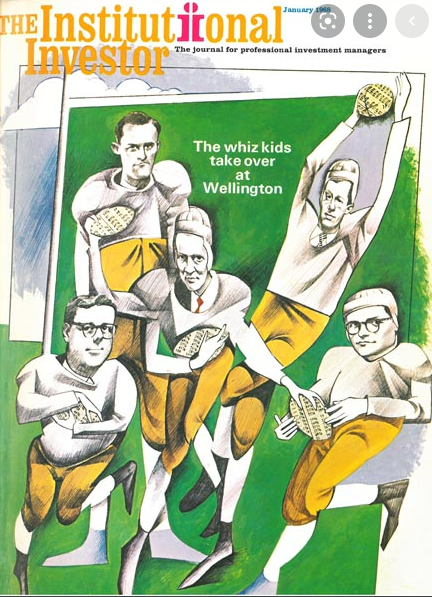 One of the whiz kids tasked with taking over one of the oldest name brands in the mutual fund business was none other than John Bogle.

The honeymoon at Wellington with the whiz kids wouldn’t last long. A combination of a brutal bear market and the end of the Go-Go years caused some strife between the new leadership and the old guard.

Bogle, the heir apparent, was in the crosshairs when the old management wanted someone to blame for poor performance. Bogle explains in his biography:

My Boston partners quickly found a scapegoat. Not among themselves, despite their responsibility for the terrible performance of the mutual funds whose portfolios they managed. They chose me as their scapegoat, the chief executive responsible for the merger that wreaked such havoc on the returns earned by the investors who had trusted us. Yet I had ceded substantial voting power to the new managers to accomplish the merger. In the midst of the bear market, on January 23, 1974, they banded together and fired me. Then they replaced me as chief executive of Wellington Management Company with their leader, Robert W. Doran.

His partners offered to buy him out but Bogle refused. Instead, he came back with a counteroffer. Bogle proposed Wellington should self mutualize to operate their funds at cost to keep fees low for investors.

Robin Wigglesworth explains Bogle’s thinking at the time in his new book Trillions:

Although seemingly self-serving, it was an idea Bogle had been mulling for some time. He had long been concerned that investment companies serve two often conflicting masters, the owners of the money manager, and the clients. Clients ideally want the best performance possible for the lowest fees. The investment manager also wants premier performance—after all, it believed.

Here’s the idea in Bogle’s own words:

I favored a complete mutualization of the funds’ operations, to be achieved by purchasing Wellington Management’s mutual fund business, “unscrambling the egg,” as it were, that I had created with that failed 1966 merger. Yes, mutualization was totally my idea, and I realized that a mutual company would never provide me with the personal fortune that so many denizens of Wall Street would earn. But it offered, I believed, my last, best chance to resume my career.

Through sheer will and determination, Bogle eventually wore his partners down. Vanguard was born and the rest is history.

It’s hard to believe Vanguard was the result of a power struggle more than anything but investors have benefitted mightily from the outcome of that struggle.

I’ve often heard other financial professionals ask why there aren’t more Vanguards out there. Vanguard is effectively owned by its shareholders. Bogle could have become a billionaire under a different business structure. I suppose that’s part of the reason.

It’s highly unlikely we’ll ever see a mutual structure like Vanguard in the asset management world but we could see something close to it on the blockchain.

In fact, there already is such an organization in development.

The Index Cooperative is a decentralized autonomous organization (DAO) that manages around $500 million in crypto index fund products.

This entire concept is kind of mind-blowing to yours truly but allow me to explain.

I am too but it makes a lot more sense to me after Michael and I talked with Mike Taormina this past week for Animal Spirits.

Taormina isn’t exactly an employee of Index Coop because technically there are no employees. But he does have an investment in the INDEX governance token. Along with a bunch of other crypto and DeFi enthusiasts around the globe, Taormina helps vet new index products for the Index Coop platform.

Right now they have funds that track the broader DeFi space, the metaverse and data economy.

I originally came across Index Coop because I was interested in learning more about the DeFi space but I have no idea how to pick individual tokens or protocols. I’m a total noobwhale and don’t have the ability to pick winners here. So an index fund structure makes sense to me.

When I first learned about the DeFi Pulse Index Fund I had no idea how the Index Coop worked. There is so much happening so fast in the crypto space that there is a lot I don’t know.

What’s crazy to me is the fact that this DAO has been able to garner half a billion dollars in a little under a year and the UX still isn’t all that great.

It’s not easy to get your money into some corners of the crypto world if you don’t know what you’re doing. It’s not as easy as opening a Robinhood or Betterment account for something like this. There are gas fees and Metamask wallets and not much in the way of 1-800 customer service numbers if you have a question.

There are pros and cons to a more decentralized organization. Things will likely move much slower when there isn’t one person or a handful of people who can make things happen in a hurry. On the other hand, this type of organization can potentially lead to lower costs and a more collective decision-making process.

Bogle’s mantra at Vanguard was “strategy follows structure.” This structure feels like it makes sense for the asset management industry in certain cases.

I have no idea where all of this stuff is going in the years ahead. But an organization like Index Coop has opened my eyes to the potential of this space.