I watched The Compound and Friends where Tom Lee discussed his prediction about demographic effects on S&P 500 performance. As a GenXer who got burned in the GFC, I’m happy to ride this wave with Millenials even if S&P 500 19,000 for 2029 seems ambitious. I also heard on CNBC today that Millenial millionaires hold 25% of their wealth in cryptocurrency.

My question is whether the potentially limitless supply of cryptocurrencies that can be created or mined (except Bitcoin) might have on diverting Millenial investments away from the S&P 500 and impact performance. While there have always been alternatives to the stock market (real estate, art, gold), they exist in more finite supplies. Could the supply of cryptocurrency and Millenial adoption derail the S&P 500 market wave?

According to Barron’s, total financial assets held by individuals at the end of 2020 were $250 trillion. Crypto is currently $2.2 trillion, making it less than 1% of worldwide financial assets.

This is a tiny number on a relative basis but impressive when you consider crypto has really only been thought of as a legitimate asset class for the past 5 years or so.

It’s also important to put the holders of this wealth into context. This is the generational breakdown in the United States: 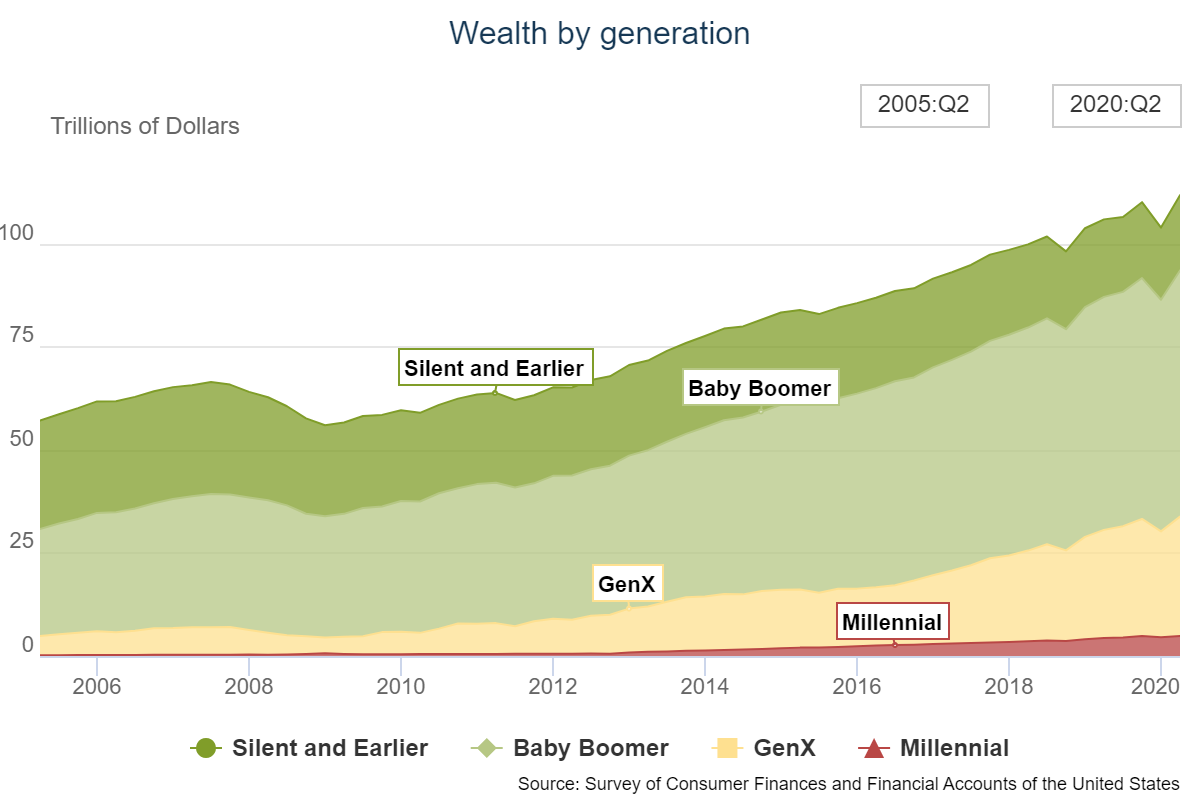 So while my fellow millennials now outnumber the boomers, they still hold most of the financial assets. Boomers have almost 54% of the wealth, GenX comes in at 26% and millennials are still at less than 5%.

We don’t move the needle just yet.

Obviously, as we move into our prime earnings years our savings will have an impact on the flows into financial assets. But the wealth transfer is going to happen at a glacial pace considering people are now living longer than ever before. It will take many years until young people control most of the financial assets.

There are also other assets I would be worried about before getting to the stock market.

Gold is the first one that comes to mind. Millennial/Gen Z digital gold is by far the most compelling Bitcoin investment thesis right now. Gold has been a store of value for thousands of years but young people understand technology more than a yellow rock.

Or how about money markets and bank savings accounts?

Stablecoins are still unregulated and the 8-10% yields will certainly come down as the industry matures and more money comes into the space. But the potential for higher yields and lack of trust in brick and mortar banks makes me think young people will be comfortable putting more of their savings into this side of crypto.

Starting in the 2000s, hedge funds became a status symbol for wealthy baby boomers. That really ramped up following the 2008 financial crisis. Even after horrendous performance numbers as a group and high fees, there are still more hedge funds (~10,000) than Chipotles or Wendy’s locations combined.

Will millennials really want to invest in hedge funds when they have crypto as the exciting part of their portfolio?

Plus, you still can’t buy crypto in your 401(k). Crypto is still 5-6x more volatile than stocks. And stocks still offer your best bet for returns above the rate of inflation over the long haul.

Crypto could do better than stocks but it’s certainly not guaranteed.

And we didn’t even mention bonds yet. Boomers grew up in the most glorious, high-yielding bond market in history. Millennials have seen nothing but low rates for their entire investing lifecycle.

As far as the unlimited nature of the number of cryptocurrencies that can be created, I would imagine you’ll see some massive consolidation in these numbers over time as more use cases come to light.

Think about this space like the invention of the automobile in the late-19th and early-20th centuries. The first car company was founded in 1895. That’s Bitcoin in this analogy.

In the first 10 years of the 1900s, there were nearly 250 new automakers. The next 10 years saw almost 170 more. There have now been an estimated 3,000 automobile companies in the United States in total.

Yet by the 1950s the Big 3 — Ford, GM and Chrysler — basically had the market cornered for the next 20 years until a handful of foreign car brands came along. Even with more competition today, market share is dominated by just 8-10 automakers worldwide.

I think we’ll see something similar play out in the crypto market. Sure, there is essentially an unlimited number of coins that can be created since all of the code is open source. But that doesn’t mean investors will come running simply because new coins are available.

We’re still in the early innings of this space. No one knows which protocols will be the ultimate winners. My guess is the majority of crypto projects in existence today will either languish or become worthless in the years ahead. There will be a handful of winners that figure out the best use cases and come to dominate the industry.

But I don’t think the stock market is at risk as much as other assets.

I did a deep dive into this question on this week’s Portfolio Rescue:

We also discussed questions on buying and selling collectibles, breaking into the finance industry and how to think about annuities in retirement.