Vanguard’s first index fund hit the market in the summer of 1976.

It was a complete bust, raising just over $11 million in capital from investors. John Bogle had dreams of raising $150 million.

That fund was so small, in fact, that Vanguard’s initial S&P 500 Index Fund could only buy 280 of the biggest, most representative stocks to create the index. Any more than that and the costs would have been too large.

And right out of the gate, the index showed disappointing performance, underperforming around three-quarters of all actively managed mutual funds from 1977-1982.

By 1981, Vanguard held just 5.8% of mutual fund industry assets. That number dropped to 5.2% by 1985 and 4.1% by 1987. Their most popular fund series, the Wellington Funds, saw 83 consecutive months of outflows, equal to $500 million or one-third of the initial assets in the firm when it was founded.

Their one saving grace was the most boring fund on the planet — the money market fund.

According to the Investment Company Institute, there is now close to $4.7 trillion in money market assets. Yet these cash equivalent funds didn’t exist until the 1970s.

The first money market fund, called the Reserve Fund, was created in 1971. At the time, banks were capped on the amount of yield they could pay out in a savings account at 5.25% per year. Through the use of short-term treasury bills and commercial paper, money market funds were able to offer much juicier yields, in the 8-9% range, which were more reflective of prevailing rates at the time.

Every other fund company immediately copied this idea. Assets in money markets ballooned from $4 billion in 1977 to $185 billion in 1981. It probably helped that interest rates were much higher back then.

Vanguard started its first money market fund in 1975. Index funds would have become popular either way but the money market fund definitely kept the firm, and frankly, most of the mutual fund industry afloat in the late-1970s and 1980s.

Here’s what Bogle had to say about the importance of money market funds to his firm in Stay the Course:

Throughout the decade of the 1980s, I often bragged to our crew about Vanguard’s spectacular growth, in part to maintain and build on the solid morale we had established. But in reality, our growth largely reflected the growth of the burgeoning fund industry. During that decade, mutual fund assets lept from $241 billion to $1.45 trillion. The charge was led by money market funds, which soared from $2 billion to $570 billion, accounting for almost half the increase.

Boring old money market funds kept Vanguard afloat long enough to allow index funds some runway to take off. The rest is history as Vanguard now manages something like $7 trillion.

Which brings me to stablecoins. 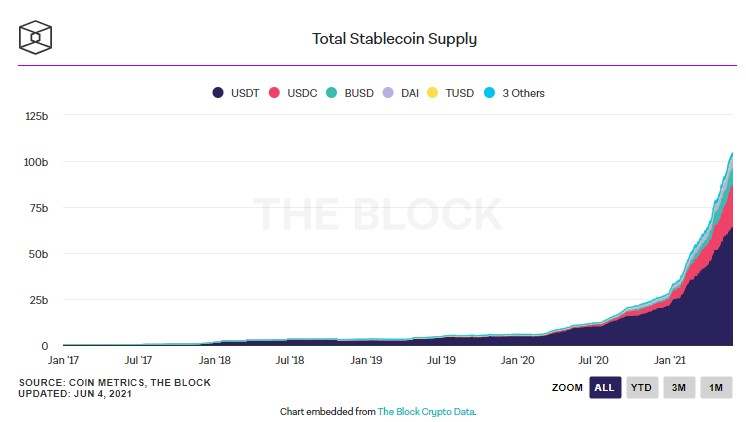 Most of the growth has taken place this year, as there was just $30 billion as of the start of 2021.

A stablecoin is simply a cryptocurrency that is backed by reserves. So you get all of the benefits of the blockchain without the volatility of bitcoin and other cryptos. You can loosely think of stabelcoins as the money market fund of crypto, with the risk profile of high yield debt.

Tether is by far the biggest stablecoin with a 62% share, which worries some people. Bloomberg had a recent piece calling for the regulation of these coins:

But stablecoins like Tether face no such constraints. There is no U.S. legal framework for regulating them. There are no requirements on how reserves must be invested, nor any requirements for audits or reporting.

If some of Tether’s investments were to become worthless or decline in value, it would suffer the equivalent fate of breaking the buck. And if, for any reason, a wave of Tether holders suddenly tried to convert their tokens to cash, we do not know whether Tether could liquidate sufficient investments quickly to satisfy the demand.

There is a huge amount of risk involved and stablecoins will probably have some hiccups along the way but I think they could end up being a toe in the water for those who are still unsure about putting their money into crypto.

Michael and I discussed stablecoins vs. money market funds and more on this week’s Animal Spirits (check out the new intro):

Further Reading:
What I Learned From Jack Bogle