We just got the highest inflation print in the United States since 1990: 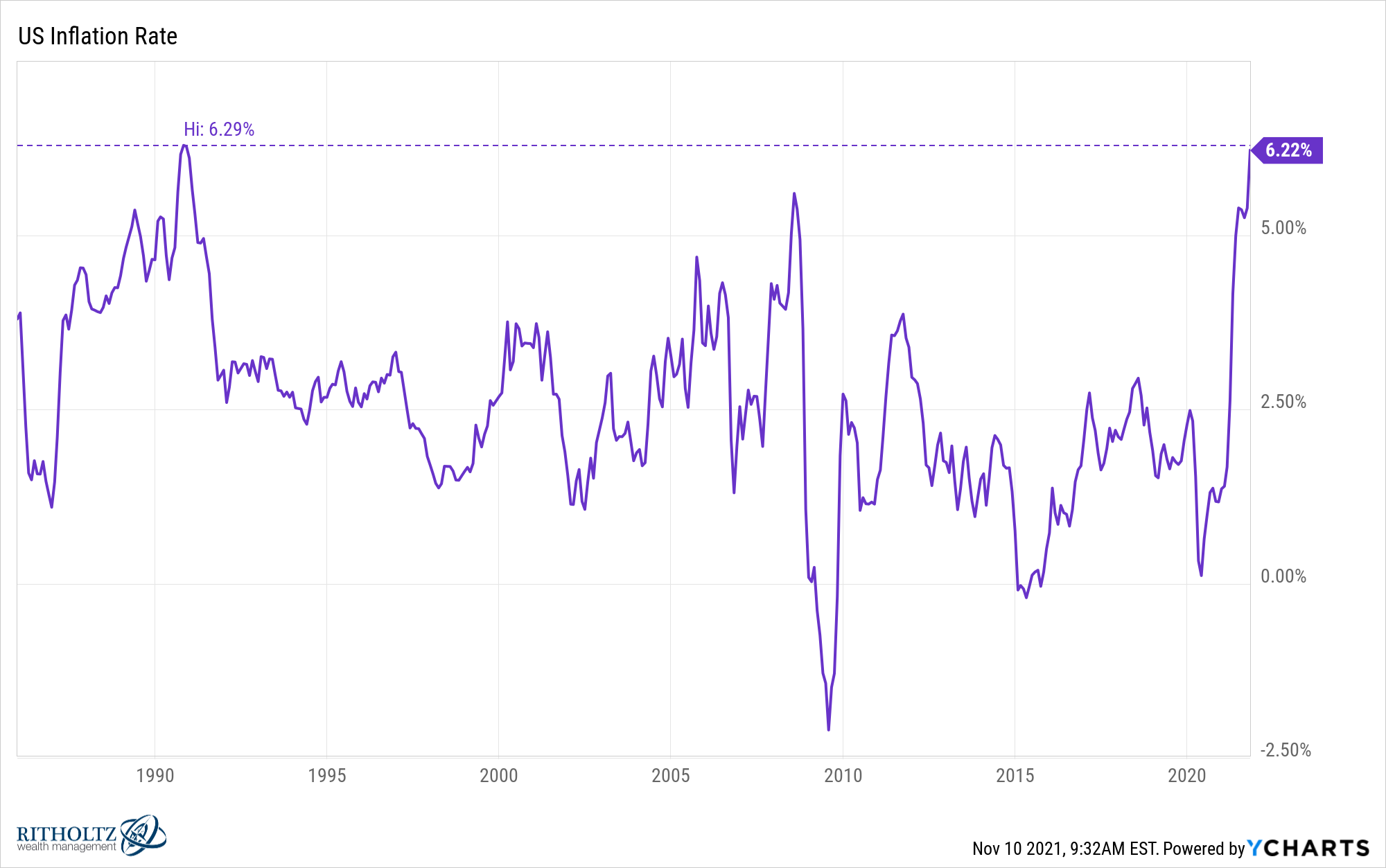 I will allow Mugatu to summarize: 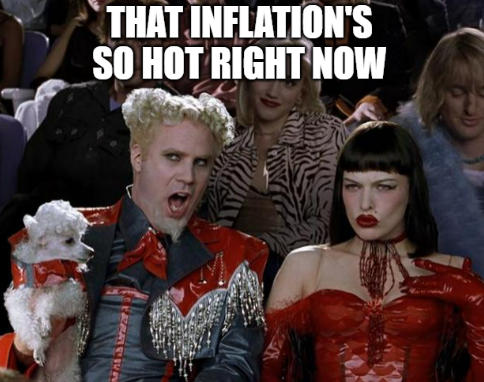 Here are some random thoughts on the highest inflation numbers in more than 30 years:

This story will have legs. You could go through the inflation components line-by-line to show why this is all used cars and supply chain issues and such but no one cares about that right now save for the econ wonks.

This is an economic story that is going mainstream. I just saw this on the Today show this morning: 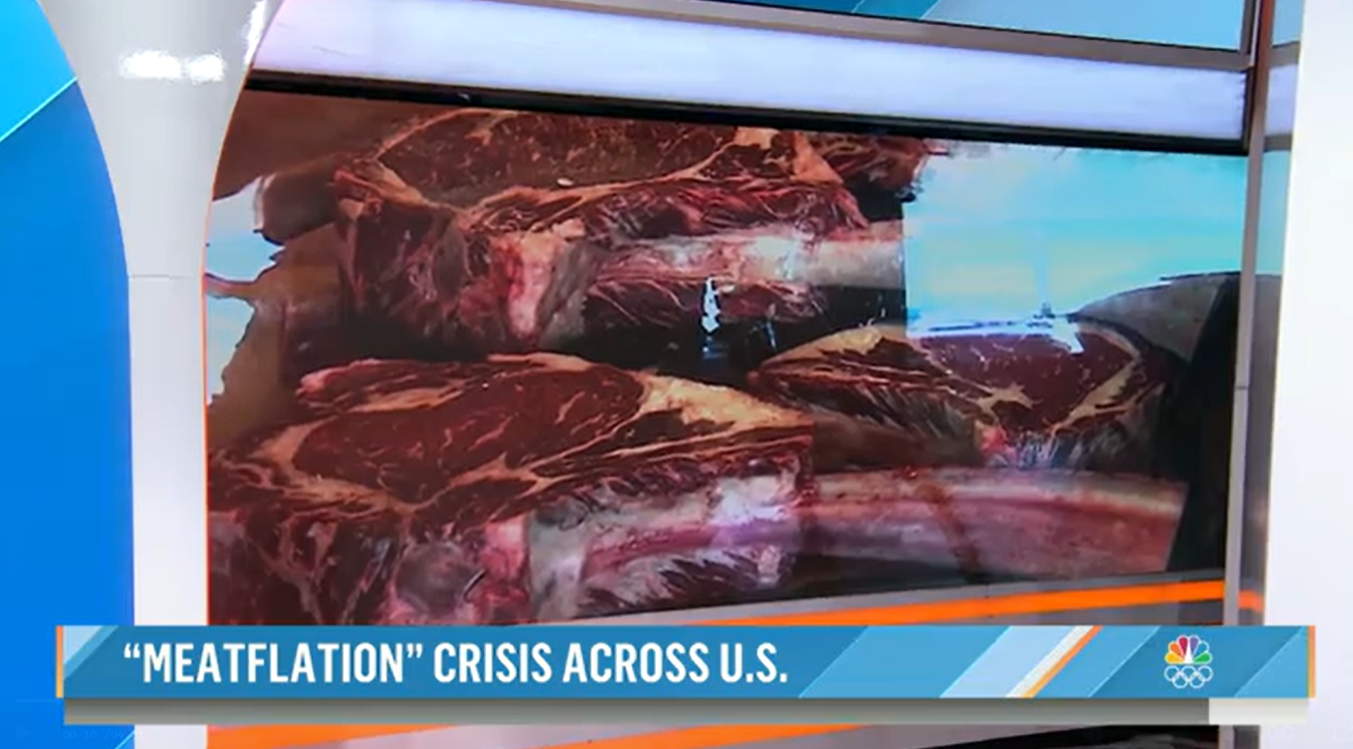 It seems like once a week there’s a different word they add ‘-flation’ to.

This is something everyone can complain about. Just wait until the holidays roll around. Your entire family is going to be talking about higher prices while stuffing their faces with turkey.

Regardless of the future path of inflation from here, this is going to be a politically-charged economic data point now. Once it’s in the headlines and at the dinner tables, the cat is out of the bag.

The bond market still doesn’t care. One of my favorite charts of the year: 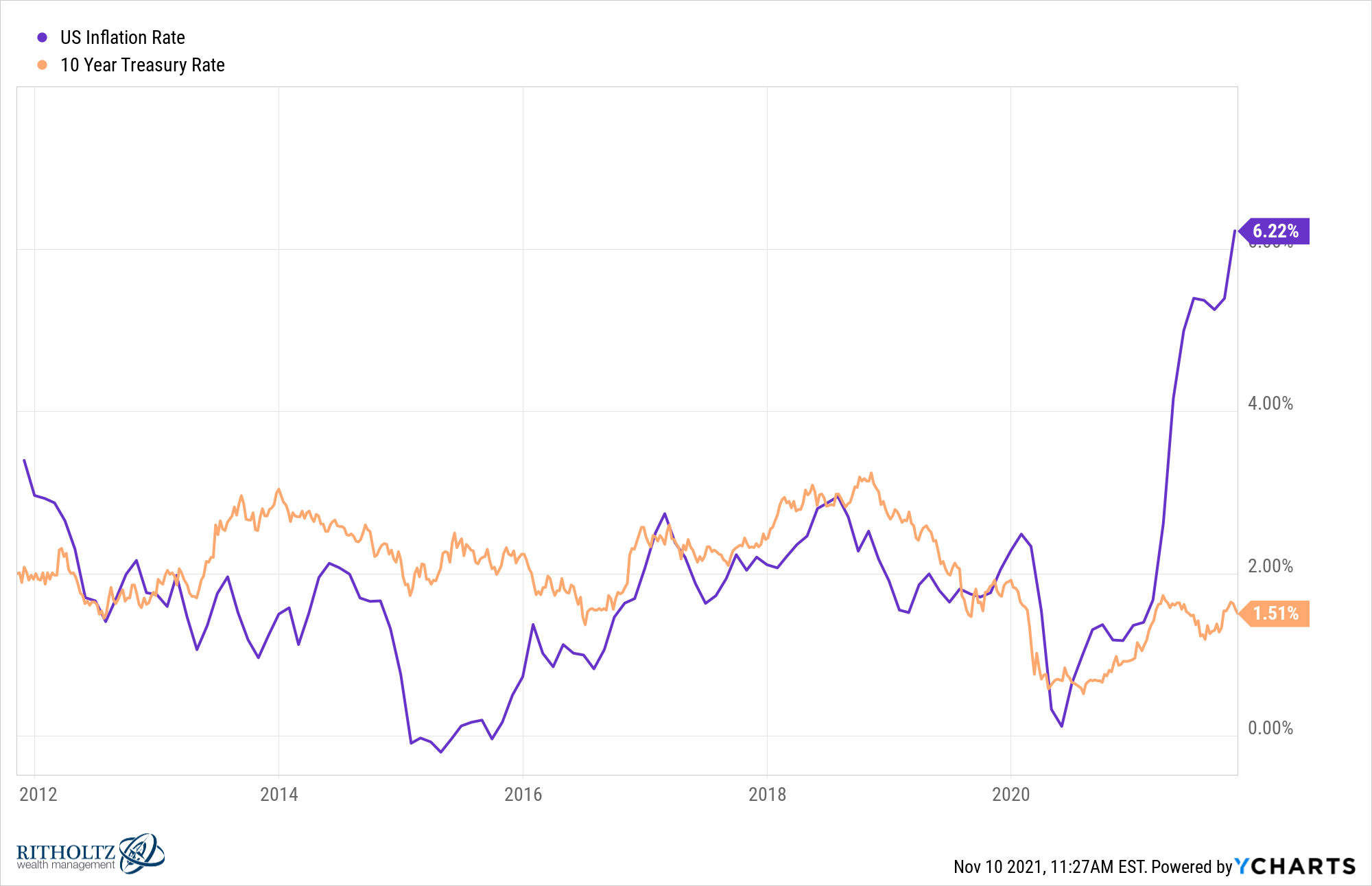 Stocks remain a good hedge against inflation. Sam Ro had an excellent piece at TKer this week that shows why it pays to own pieces of corporations when prices rise.

Companies are passing along their higher prices to consumers:

Recall this anecdote from McDonald’s CFO Kevin Ozan after the company raised menu prices by 6% (via The Transcript): “We haven’t seen, I’ll say, any more resistance to our price increases than we’ve seen historically… The 6% has been pretty well received by customers.”

So input costs rise, companies pass along higher prices to consumers, who then complain but pay up anyway since we’re a nation that loves to consume stuff and companies keep near-record high margins.

Until consumers revolt and demand slows, corporations have the pricing power to pull this off.

Inflation could always get out of control and throw a wrench into this equation but right now this is why stocks are a wonderful hedge against inflation.

Has there ever been a better time to be a borrower? I know this is not necessarily an apples-to-apples comparison since one input is measured over the short-term while the other is a long-term variable but just look at the gap between inflation and mortgage rates: 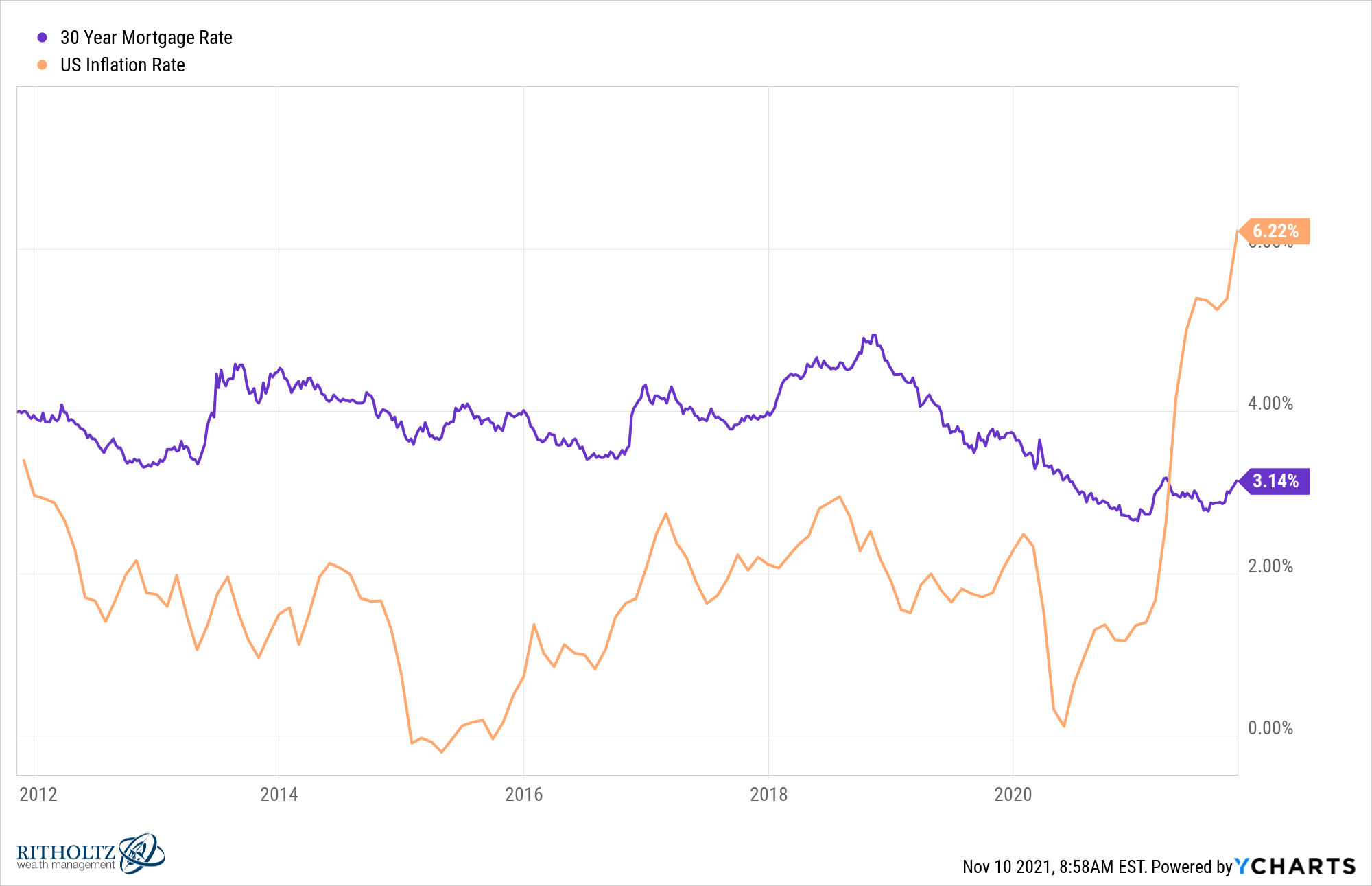 This kind of thing doesn’t help day-to-day spending at the grocery store or the gas pump, but if you’ve owned a house for more than 12 months or so, you are already well ahead of the inflation rate.

You have more equity in your home and inflation is slowly eroding the dollars you are paying back at ridiculously low borrowing rates.

A fixed-rate mortgage remains one of the best hedges against higher prices.

I understand why some people like to pay down their mortgage faster because of an aversion to debt but you could argue there has never been a better time to borrow money (assuming you make wise financial decisions).

What if this higher inflation is still temporary? The supply chain bottlenecks are not going to sort themselves out overnight. Commodity prices aren’t going to immediately fall back to pre-pandemic levels. It could take some time to work through this stuff.

But what if this is just a temporary inflationary spike? What if demographics and technology eventually win out and cause inflation to slow in the coming years?

Cullen Roche lobbed this Molotov cocktail onto Twitter this week: 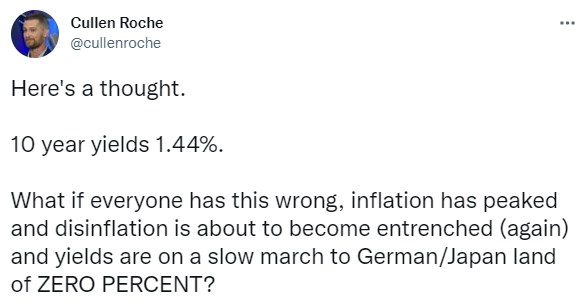 I mean, anything is possible, right?

There is one thing about inflation that’s important to remember — it’s highly volatile over time: 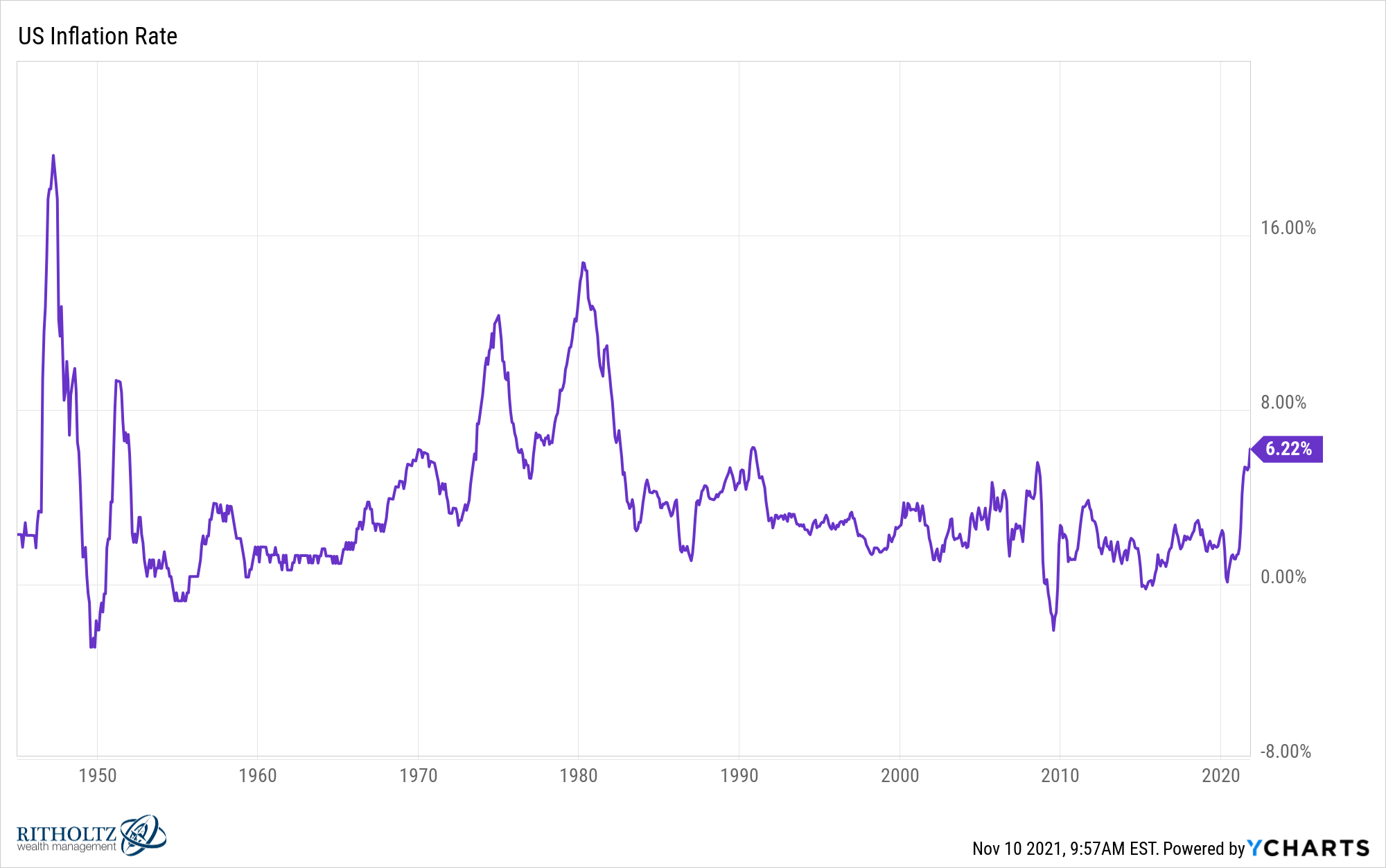 Inflation is not going to move in a straight line in either direction for long. There will surely be head fakes, peaks, valleys and everything in-between in the years ahead.

Many people are worried about a 1970s redux with sky-high inflation. Never say never.

We had one of the biggest booms in our country’s history for both the economy and the stock market for the remainder of the decade.

My point here is there is likely a wide range of potential outcomes from current inflation levels.

Things could get worse and prices could spiral out of control. Or we could get things under control and the economy could be setting up for a continuation of the Roaring 20s.

Your guess is as good as mine.

Further Reading:
Predicting inflation is hard
What If We Get Inflation But Rates Don’t Rise?