In 1928, economist Irving Fisher wrote a book called The Money Illusion that was all about inflation.1

The best way to view think about inflation back then was through the lens of wars and how they impacted the economy. Fisher lays out that relationship:

Usually inflation comes when governments are in financial straits, especially in war time, or after a war has crippled the government’s financial powers. War has always been by far the greatest expander of paper money and credit, and therefore the cause of the greatest price upheavals in history.

Basically, the way things played out in the late-19th and early-20th centuries went something like this:

Jon Hilsenrath at the Wall Street Journal recently provided a historical look at inflation going back to World War I which does a nice job illustrating this idea: 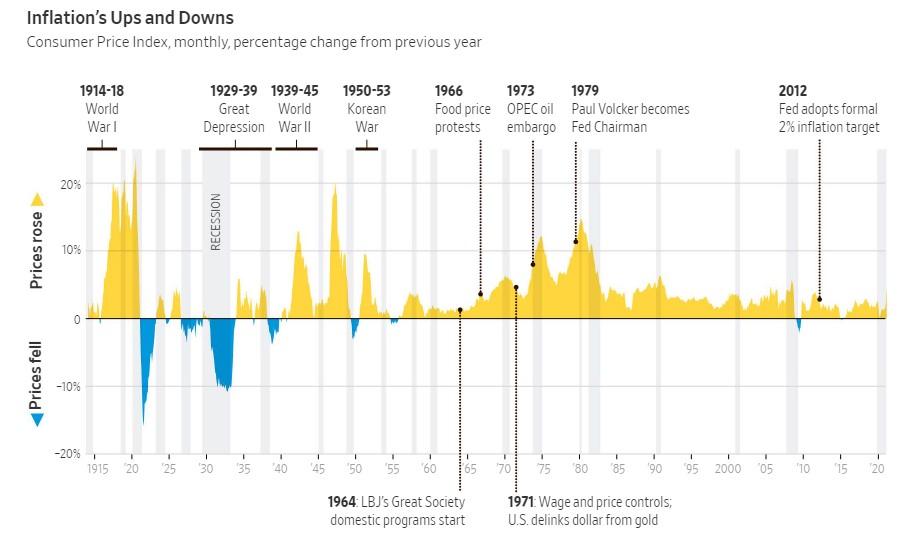 The early-20th century is littered with enormous booms and busts from skyrocketing inflation to punishing deflation. Not only were the downturns magnified back then but they also occurred more often than they do today.

Aside from the inflationary 1970s period, the post-WWII era has been a much smoother ride from a price perspective than the pre-WWII era.

A more mature economy that isn’t subject to depressions and economic panics once every few years is a good thing. It also makes it much harder to predict economic output using historical relationships, especially when it comes to inflation.

Inflation just might be the hardest economic variable to forecast or understand in the U.S. economy.

I’ve read multiple books about the 1970s inflationary spike and I’m still not quite sure the exact reasoning for it. There are plenty of theories but no single satisfying narrative that helps explain what happened.

The Fed has been actively seeking a 2% inflation rate since the end of the Great Financial Crisis. Yet more than 63% of the time since 2010 the trailing 12-month inflation rate in the U.S. has been less than 2%. They printed more money than ever before and kept rates at 0% for years on end and yet inflation never really showed up.

The market isn’t great at predicting inflation either.

The breakeven rate shows the difference in yields between treasury inflation-protected bonds (TIPS) and regular treasury bonds, which is essentially the market’s prediction of the coming inflation rate: 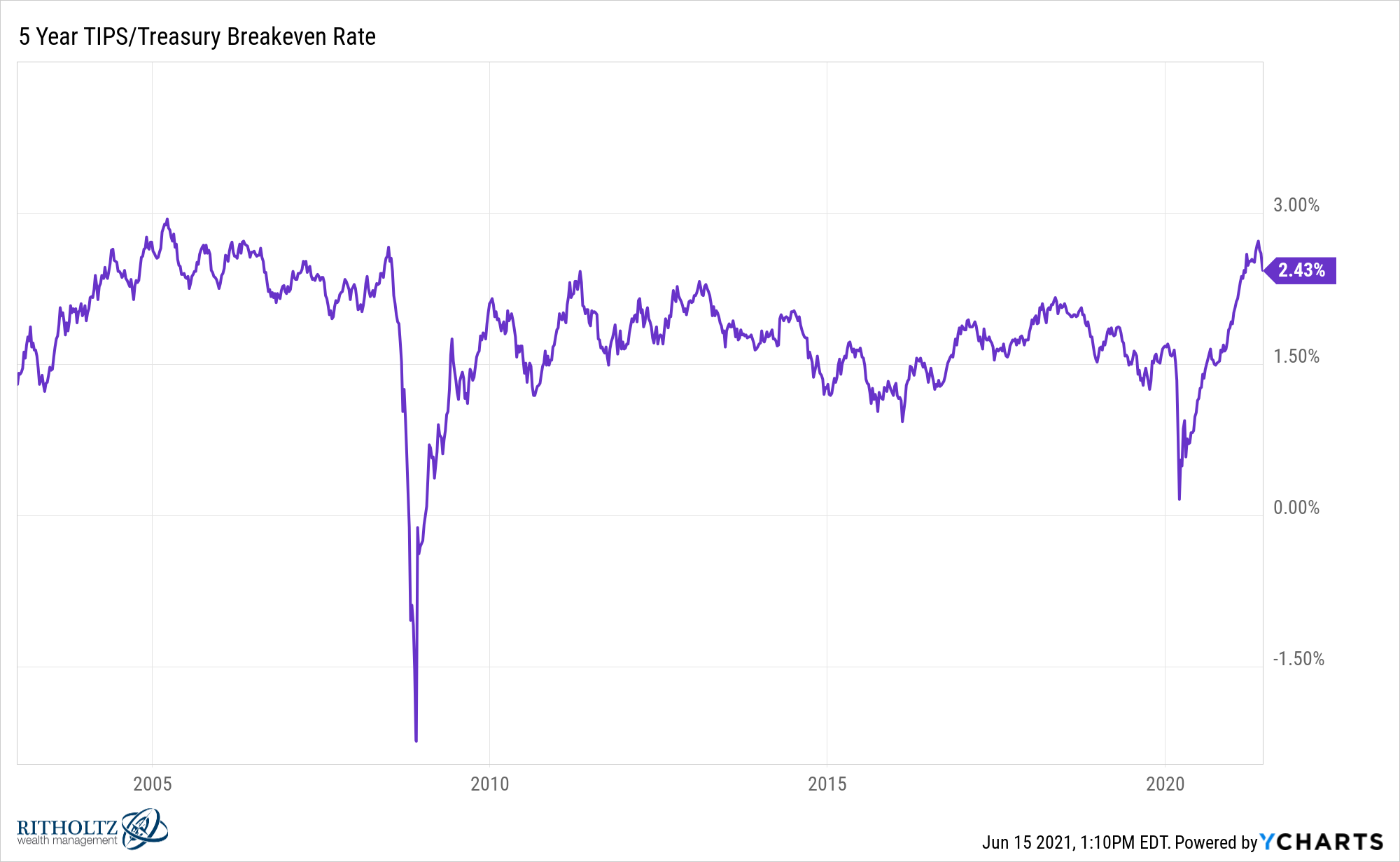 This chart has had many people worried about higher inflation because that’s what the market has been pricing in. Unfortunately, this breakeven rate isn’t all that helpful when it comes to predicting actual inflation going forward.

The San Francisco Fed produced a research report that looked at breakevens and a number of other inflation models to test their predictive power. The results weren’t great:

Surveys were actually a little better than market-related factors but you can see the average forecast errors were all at least 1.5%. When your target rate of inflation is 2% that’s a pretty decent margin of error.

The main argument at the moment about inflation is whether it’s finally here to stay from all of the government spending or simply transitory from a quirky pandemic economy. There are solid cases for both sides of this argument.

The reasons this bout of inflation could be transitory are as follows:

And the reasons inflation could remain elevated going forward:

I’m leaning towards the transitory but higher than the previous cycle camp but wouldn’t be surprised either way.

We’ve never conducted an economic experiment of this magnitude before. No one knows how all of these trillions of dollars are going to impact the trends that were underway before the pandemic when it comes to demographics, interest rates, prices, spending, supply and demand.

The psychological component is probably the hardest part of this endeavor. Changes to wages, prices and supply shocks can change people’s behavior in ways market models simply can’t predict.

One thing is for sure — the economy is far more interesting than the stock market right now.

1You may recognize Fisher from such ill-timed quotes as “Stock prices have reached what looks like a permanently high plateau,” in 1929 just before the Great Depression knocked more than 85% off the value of the market.