A number of investors and pundits assumed higher inflation was a foregone conclusion following the 2008 financial crisis.

After all of the bailouts, stimulus and interest rate cuts anyone who has ever read an economic textbook could plainly see rising prices as the next logical step.

Not content with simply predicting inflation, many of the investors who either predicted the 2008 crisis or were scarred by it, took it one step further and forecasted a collapse of the U.S. dollar stemming from hyperinflation.

Instead inflation has remained subdued: 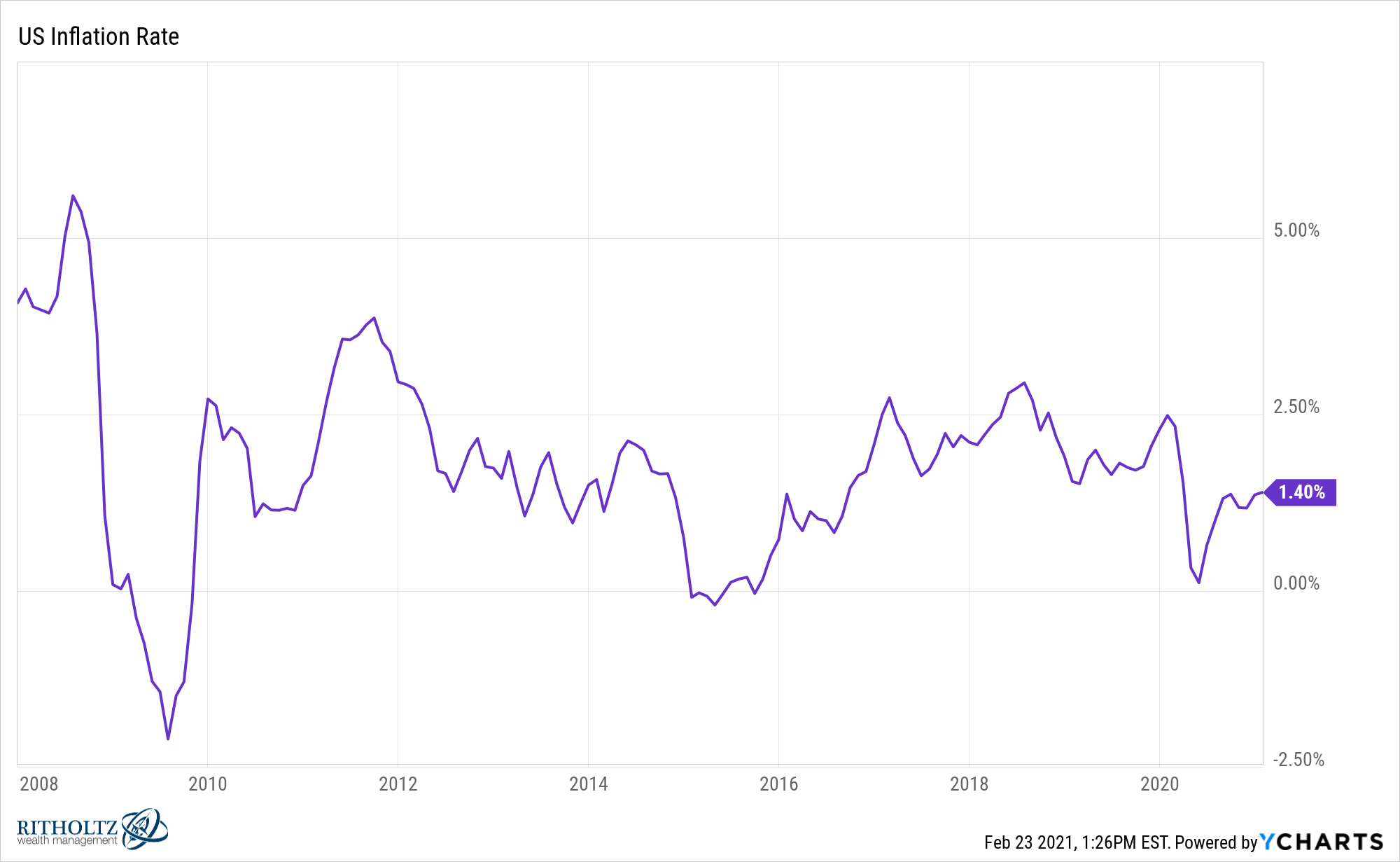 And the dollar actually strengthened: 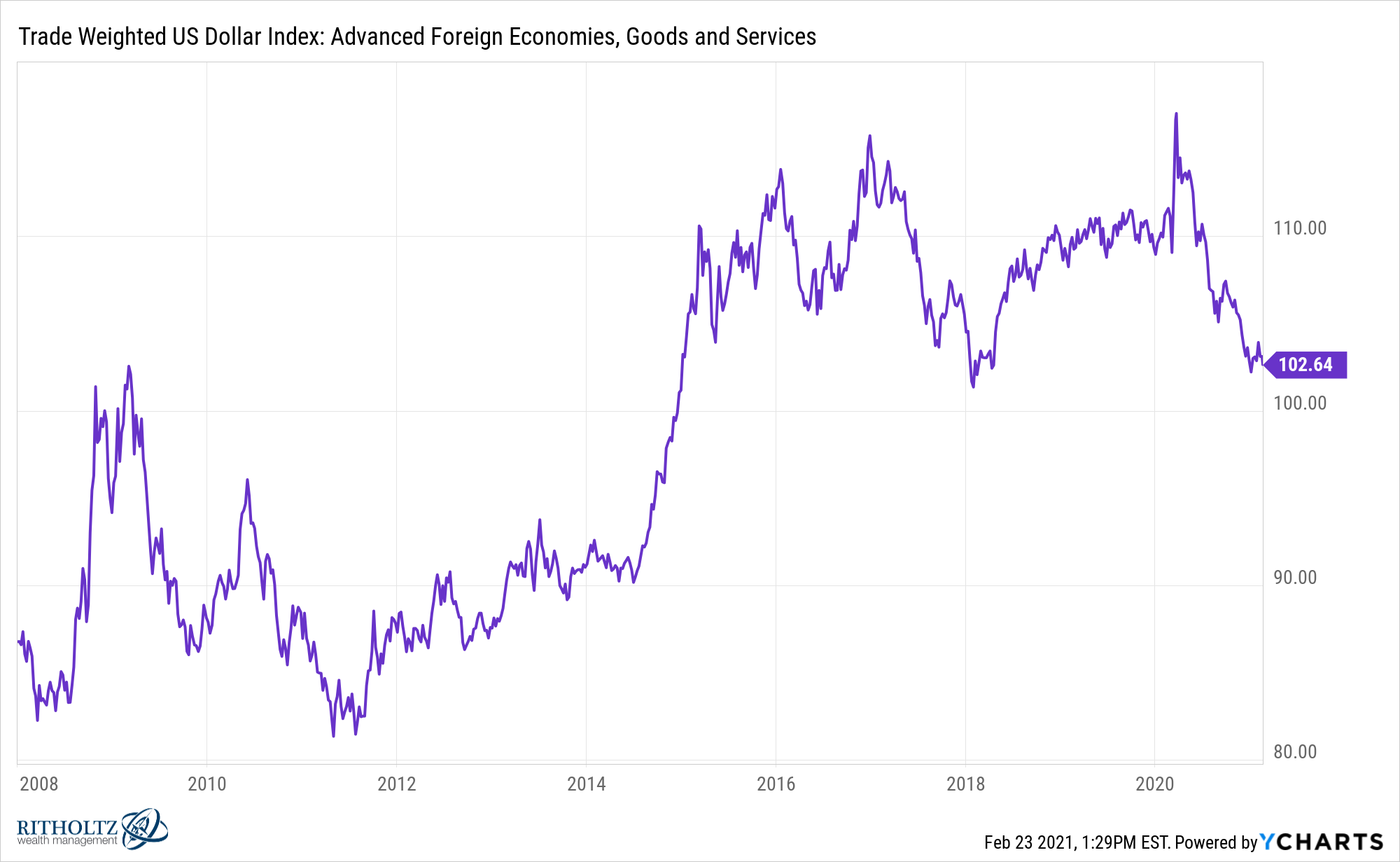 After the Corona crisis, inflation is yet again a worry. And this time I actually believe it’s a more legitimate worry than coming out of the 2008 financial crisis.

The economy is in much better shape as are household balance sheets. And this time we have not only the Fed promising easy money but the government has stepped up their spending in a big way.

And again, not content to simply predict above-average levels of inflation, we’re starting to see more hyperinflation comparisons trickle out.

Michael Burry, of The Big Short fame, recently put out everyone’s favorite hyperinflation scenario — Weimar Germany in the 1920s — as a concern.

This is everyone’s favorite hyperinflation proxy because it happened in a developed economy and people ended up pushing around wheel barrels full of worthless cash. The Fed is printing so much money it’s only a matter of time, right?

The Weimar analogy is only useful as a scare tactic, not an actual helpful macro prediction. Reading a history book or two should clear this right up.

Zach Carter covered this period in his excellent book, The Price of Peace. To cover their war debts and pay off reparations for World War I, Germany was actively pursuing double-digit inflation. It didn’t work:

For a while the inflationist strategy seemed to work. Though prices rose fortyfold ove the course of 1922, wages generally kept pace, and — in sharp contrast to the situation in Britain — jobs were not hard to find. But in November 1922, the German government failed to make a reparations payment to France, and on January 11, 1923, the new conservative French prime minister, Raymond Poincare, ordered an invasion of the Ruhr Valley. It was a simple profit calculation. Control of the Ruhr coal mines, he believed, would more than compensate France for the costs of military occupation.

“Hyperinflation,” according to conservative economic historian Niall Ferguson, “is always and everywhere a political phenomenon,” and the political turmoil of the French occupation sparked a swift and terrible reaction in currency markets. International confidence in the mark collapsed. In January, one U.S. dollar could buy 7,260 German marks. In August, it bought an unfathomable 6 million. By 1924, on prewar gold mark could be exchanged for upward of on trillion postwar paper markets. As the money became meaningless, the system of commerce broke, and unemployment skyrocketed to 20 percent.

And Irving Fisher once wrote:

Indexes show that the German commodity price level rose during, and following, the World War more than a trillion fold as compared with the level of the year 1913, or, to reverse the index, that the buying power of the German mark was reduced to less than one-trillionth part of what it was in 1913.

The most extreme instances of loss of real wages occurred in Germany during the early days of the great inflation which began in the middle of 1922. In one week in January, 1923, the wages of skilled labor of all kinds had advanced to more than 500 times the level of 1913. But the cost of living had advanced more than 1100 times; so that the workman’s weekly wage of 18,000 marks would buy less than half what his weekly wage of 35 marks bought in 1913.

By the end of 1923, the average weekly wages for a metalworker were 30 trillion marks or about 850 billion times the wages from 1913. Inflation over this same time frame increased a cool 1.25 trillion times.

I know the pandemic feels like a time of war in many ways, but people in the early-1920s were not only coming off their own pandemic in 1918, but an actual war…with the entire world.

And Germany was in the precarious position of being the country that was forced to pay for what they did in that war. If you think politics are bad in the U.S. right now, read a few books on what was going on in Germany in the 20s.

Central banks also didn’t have the same control over the functioning of the markets back then as they do today nor were governments very intelligent about how to handle their debts.

Could we see higher inflation in the 2020s than we saw in the 2010s? That is probably a higher probability than it’s been in some time, yes.

Will workers see their wages grow 850 billion times? No, I feel pretty safe in saying that’s not going to happen.

Let’s see what happens with inflation above 2% for an extended period of time before we start worrying about carrying around pallets full of dollars.

I stepped in for Michael on this week’s What Are Your Thoughts where Josh and I talked about the hyperinflation predictions and more:

And don’t forget to subscribe to The Compound for more of these videos.