Bonds will provide an interesting case study in investor behavior in the years ahead. With interest rates at much lower levels than they have been in the recent past the same change in rates will now lead to much more volatility in bonds than it would have at the higher rates seen in the past. When Trump became president many predicted sharply higher rates and as you can see from this piece rates did rise. But since I wrote this one for Bloomberg a couple months ago rates have dropped. Bonds are supposed to be boring but they may prove harder to hold in the years ahead for those investors who go in with the wrong expectations.

Markets are never perfect in their predictive abilities but they tend to be forward-looking in how they trade to anticipate what will happen next. Take last week’s interest-rate increase by the Federal Reserve, its third since December 2015, and the bond market.

Bond yields have been rising for some time. In what some investors are calling a generational bottom in rates, the yield on the benchmark 10-year Treasury note went as low as 1.36 percent in July 2016. It is currently at about 2.41 percent. Two-year yields have more than doubled and are now almost equal to the lows in the 10-year yield from this past summer. The Fed isn’t the only reason, as investors are also weighing higher inflation expectations, economic growth estimates and bond market dynamics when considering the outlook for fixed-income assets. 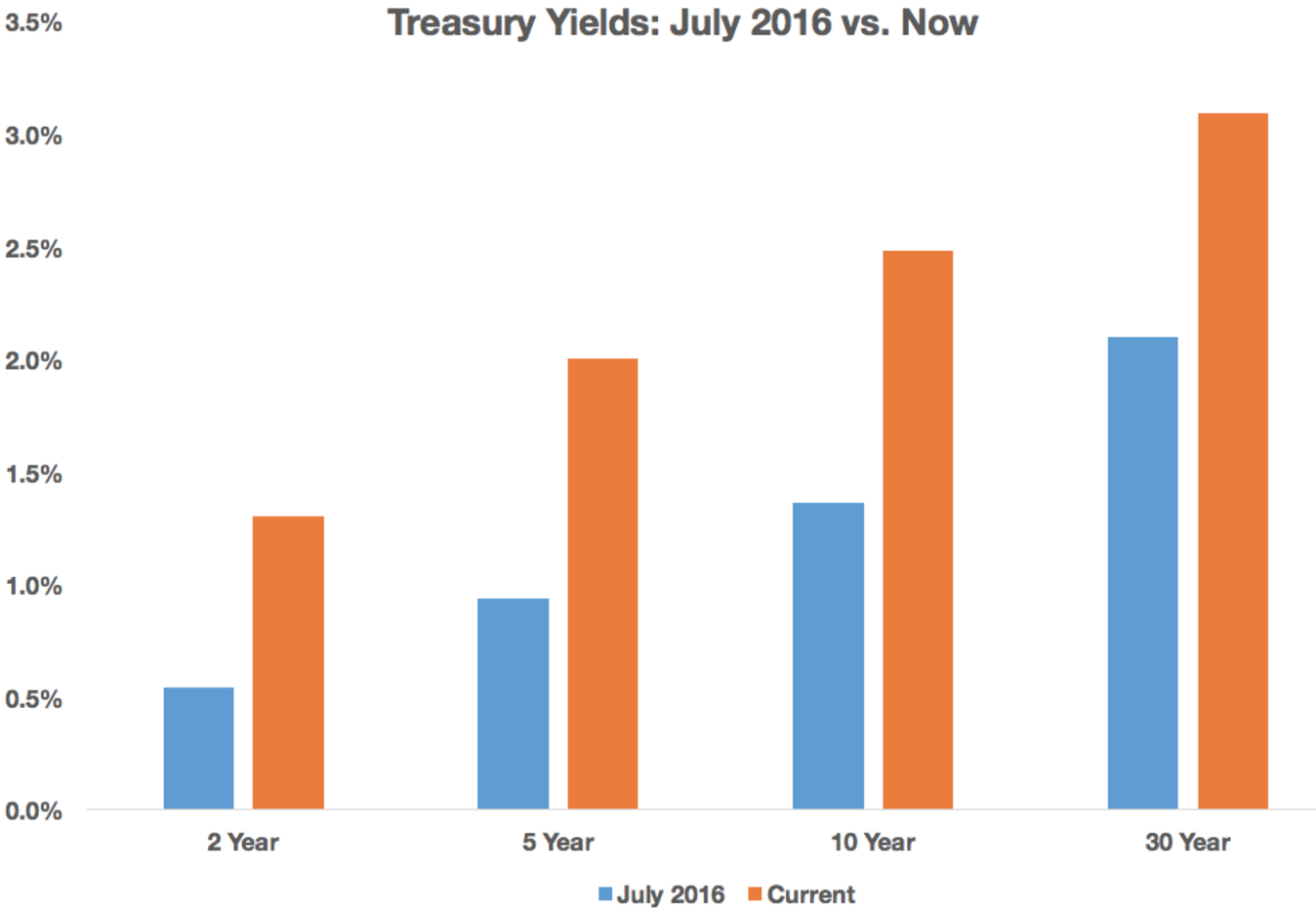 This move in rates can also be instructive for investors to understand how duration works in terms of different maturity levels. Long-dated bonds have been hit much harder by the rise in yields than debt securities with shorter maturities. This makes sense given the fact that longer-term maturities pay a higher rate of interest. Higher yields tend to mean higher risk in the land of fixed income.

This very well could have been a generational bottom in yields that marks the end of a bond bull market that is closing in on four decades in length. However, in the grand scheme of things, the latest rate rise is still a minor blip on the radar screen. The problem with trying to handicap the bond market or the direction of interest rates is that there has really only been three cycles over the past 90 years or so and each has lasted for many decades. 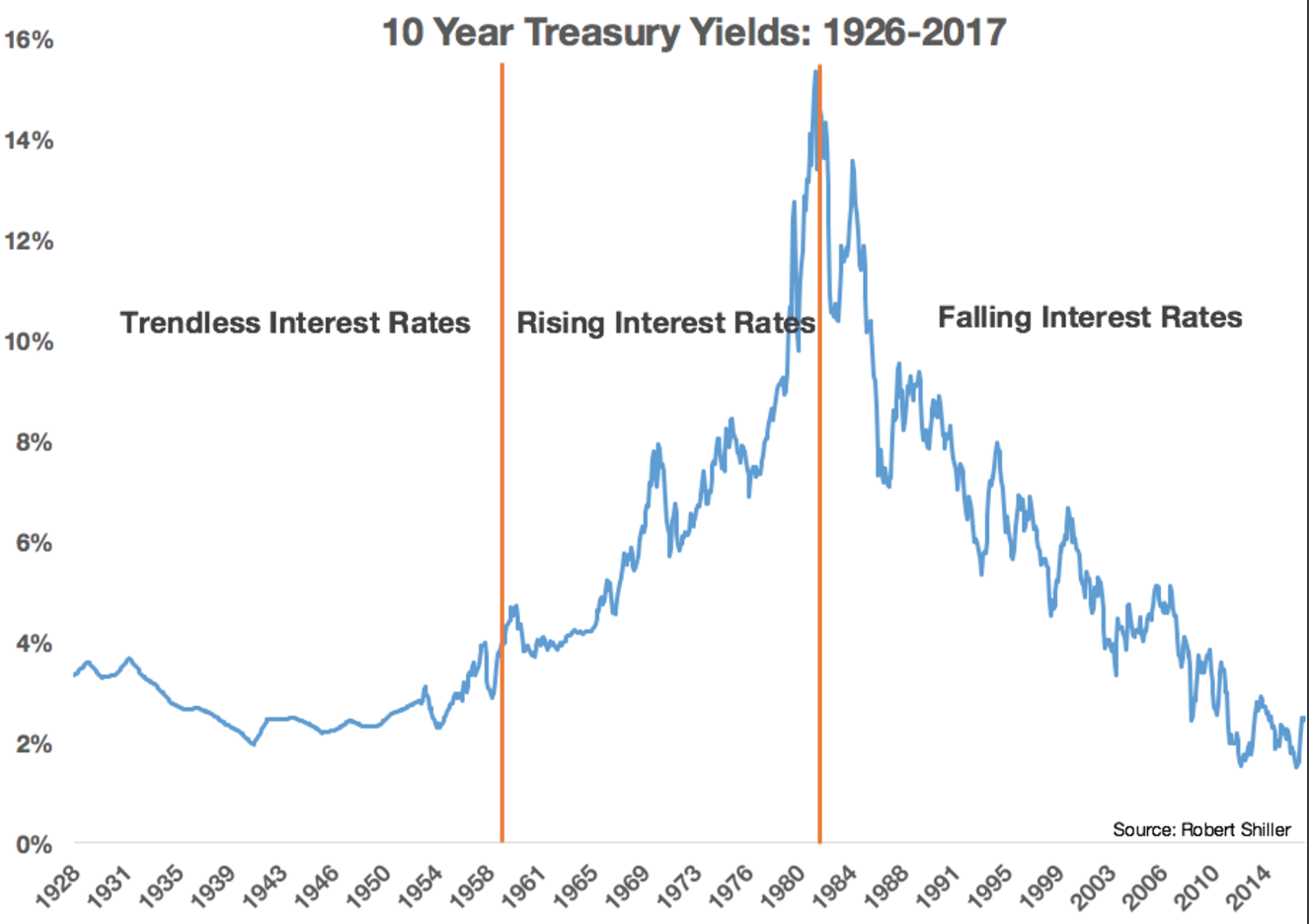 I’ve segmented each of the three cycles by the direction of interest rates over time. From the time just before the Great Depression until the late-1950s, rates were stuck in a range of 2 percent to 4 percent. The bear market in bonds that began in the late-1950s would eventually see rates top out at over 15 percent in the early-1980s. Yields have been steadily falling ever since, ushering in one of the longest, steadiest bull markets of all-time in bonds. This table shows how various fixed-income assets performed during the three interest rate cycles:

I added a column on inflation because inflation is one of the biggest risks to a long-term bondholder. Investors these days spend a lot of time worrying about how rising rates will impact their bond holdings but over the long haul it’s inflation that will take the biggest bite out of your fixed-income investments.

You can see that bonds showed positive returns across the board during the rising rate environment of the 1960s and 1970s. While investors can expect to experience short-term principal losses when interest rates rise (bond prices and yields are inversely related in that when yields/rates, bond prices fall and vice versa) eventually the higher yields can make up for those losses. It’s the real returns that are problematic for long-term bond investors in this type of environment. Here are those same bond categories after inflation is taken into account:

The problem with the bull market in bonds since 1981 is that it has distorted investor expectations for returns. Before Paul Volker and the bone crushing inflation of the 1970s caused bond yields to hit double-digit levels, bonds were a very low-yielding investment that didn’t offer great long-term returns. The past three-plus decades are an aberration.

No one knows what the next cycle will look like in terms of the direction of interest rates. A lot will depend on economic variables that are too hard to predict. Regardless of the direction in rates, investors in fixed income need to adjust their expectations for future returns. Lower starting yields will lead to lower long-term performance in bonds.