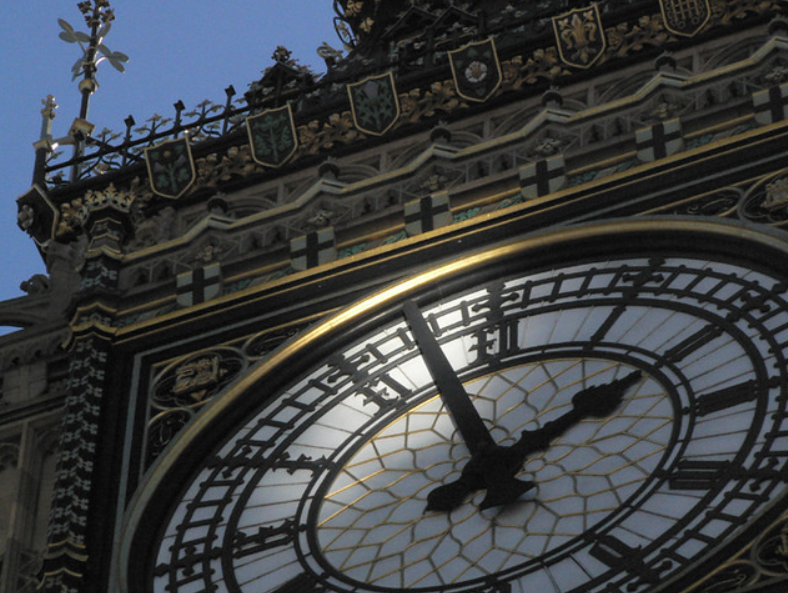 “The result of all this is that Americans are the best entertained and quite likely the least well-informed people in the Western world.” – Neil Postman

Legend has it the first mechanical clock was invented by a monk named Gerbert (who later became Pope Sylvester II) in the 10th century.

Monks practice a regular schedule so having a simple way to gauge intervals would have helped in their routine.

This story may be an old wives tale and the mechanical clock probably wasn’t invented until the 14th century but it’s hard to believe people used to use nature as their form of time measurement. It’s estimated that around 1345 people began breaking up hours into 60 minutes and minutes into 60 seconds.

The whole idea of using a clock may have a bigger impact on humanity than we realize.

Lewis Mumford, in his book Technics and Civilization, wrote about how the clock, not the steam engine, might be the key development of the industrial age:

It marks a perfection toward which other machines aspire. The clock, moreover, served as a model for many other kinds of mechanical works, and the analysis of motion that accompanied the perfection of the clock, with the various types of gearing and transmission that were elaborated, contributed to the success of quite different kinds of machine.

Mumford worried the clock had the effect of disassociating time itself from human events and turning it into measurable mathematical intervals or sequences.

In his excellent book, Amusing Ourselves to Death, Neil Postman takes Mumford’s ideas a step further and discusses how time has become an all-powerful measuring stick in many ways:

Beginning in the fourteenth century, the clock made us into time-keepers, and then time-savers, and now time-servers. In the process, we have learned irreverence toward the sun and the seasons, for in a world made up of seconds and minutes, the authority of nature is superseded.

Both Mumford and Postman worried in their writings about the impact this has had on society.

Mumford worried mechanical time would make us forget about the importance of measuring life by human experiences.

Postman wrote about how technology in the form of entertainment could impact our daily lives much as the clock did in the industrial age:

It’s scary how prescient Postman’s book was about the way we interact with technology today through platforms like social media or the news considering it was written in 1985. He saw the writing on the wall for today’s 24-hour news culture:

I do not mean to imply that television news deliberately aims to deprive Americans of a coherent, contextual understanding of their world. I mean to say that when news is packaged as entertainment, that is the inevitable result. And in saying that the television news show entertains but does not inform, I am saying something far more serious than that we are being deprived of authentic information. I am saying we are losing our sense of what it means to be well informed. Ignorance is always correctable. But what shall we do if we take ignorance to be knowledge?”

Being able to structure our lives around a mathematical time structure has surely been a net positive for society but I can see why Mumford worries about those who turned into time-servers.

And all of the new communication platforms have surely been a net positive for society but I can see why Postman was so worried that the firehose of information these days has more entertainment value than useful information.

Personally, I love the insane amount of entertainment options we have at our disposal today. But Postman drew an important distinction when he wrote, “There is nothing wrong with entertainment. As some psychiatrist once put it, we all build castles in the air. The problems come when we try to live in them.”

Michael and I have another Re-Kindled podcast coming out soon where we do a deep dive on Postman’s book. It’s worth a look if you would like to read along with us:

Amusing Ourselves to Death

The book was unbelievably prescient.