The year-over-year U.S. inflation rate came in today at nearly 5%, the fastest pace of higher prices since 2008.

Some context is necessary around this number.

A year ago the economy was still slowly waking up from its pandemic slumber. Things like used cars and airfares make up a decent amount of this jump in prices. Inflation readings will likely be lower in the coming months because of this.

The bond market still doesn’t seem to care and this bout of inflation is probably transitory. We’ll see.

But there are certain goods and services that are seeing price increases that will be permanent. Inflation is much more personal than any government statistic. Some households will experience more pain than others depending on where they spend their money.

Regardless of what happens to price levels from here, inflation is an ever-present risk for investors.

Beyond keeping your lifestyle inflation under control and increasing your pay, the best way to hedge against rising prices is to stay invested in the stock market.

That’s not the sexy inflation hedge most people are looking for but it’s probably the easiest answer.

And it’s not just important to stay invested while inflation is here.

Take a look at some admittedly cherry-picked time frames for annual returns on the U.S. stock market (S&P 500):

The most obvious takeaway here is the stock market is cyclical. The good times never last forever nor the bad times. 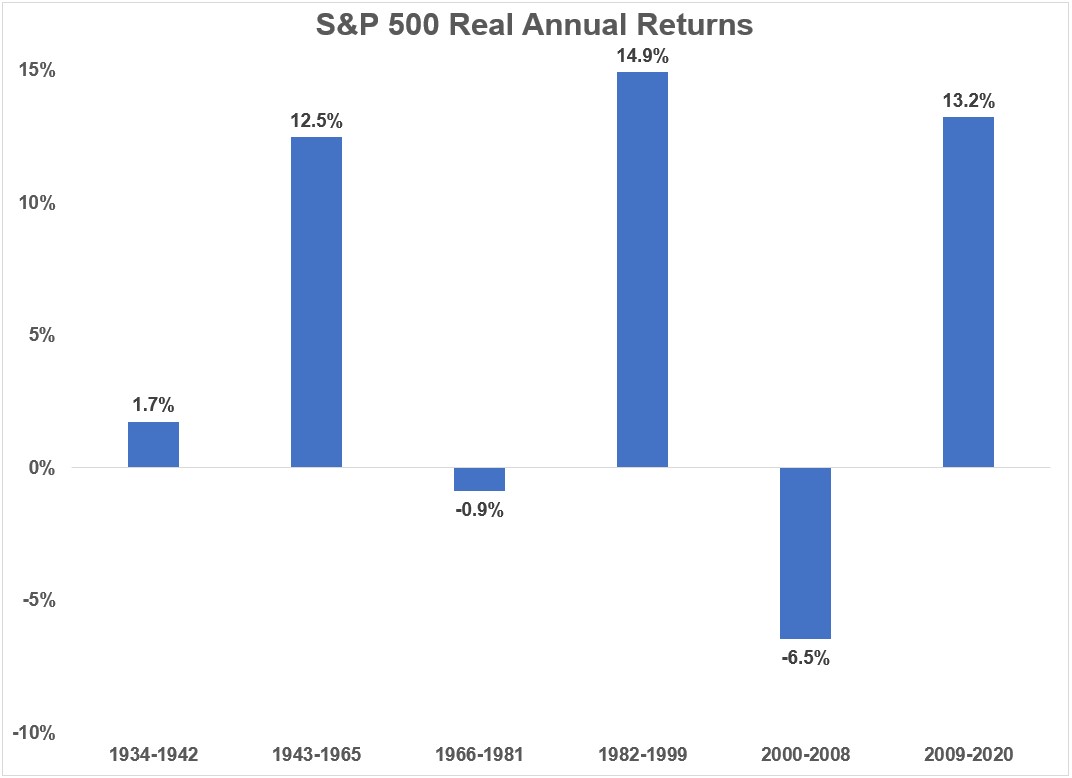 You can also see there have been some terrible cycles to invest in the stock market.

Deflation in the 1930s was followed by an inflationary spike in the early-1940s that led to terrible returns.

That was followed by a huge boom, mainly in the 1950s that gave investors spectacular returns for two-plus decades.

Inflation spiked in the 1970s, leaving investors with decent nominal returns but awful real returns. Investors in the U.S. stock market lost more than 35% after adjusting for inflation from 1966-1981.

The 1980s and 1990s still saw some inflation but it was falling and that led to glorious returns for investors.

The 2000-2008 time frame was bookended by two gargantuan crashes of more than 50%.  When you take into account the 3% inflation, investors lost close to 7% per year for 9 years.

The most recent cycle has been the best of both worlds — high nominal returns and low inflation.

Now you could make the claim that periods like 1966-1981 show why the stock market isn’t always your best bet. When inflation ran the hottest over a long stretch, the stock market failed to keep up.

But it’s because of periods like this that you have to stay invested.

Yes, returns from 1966-1981 were negative on a real basis. But let’s combine that inflationary bust with the booms that preceded and followed it.

Even 2000-2020 has given investors around 5% a year in real returns. Not bad considering we’ve now lived through three recession and three massive stock market crashes this century.

I really don’t know if higher inflation is here to stay or not. There are fairly compelling arguments on both sides of this debate.

Regardless of the reason, the stock market is going to be underwhelming at some point going forward.

Many investors assume that means getting out of the market.

There’s only one guaranteed way to lose money to inflation — don’t invest your savings at all.

Further Reading:
The Simplest Asset To Hedge Against Inflation