Ben Carlson · The Simplest Asset to Hedge Against Inflation 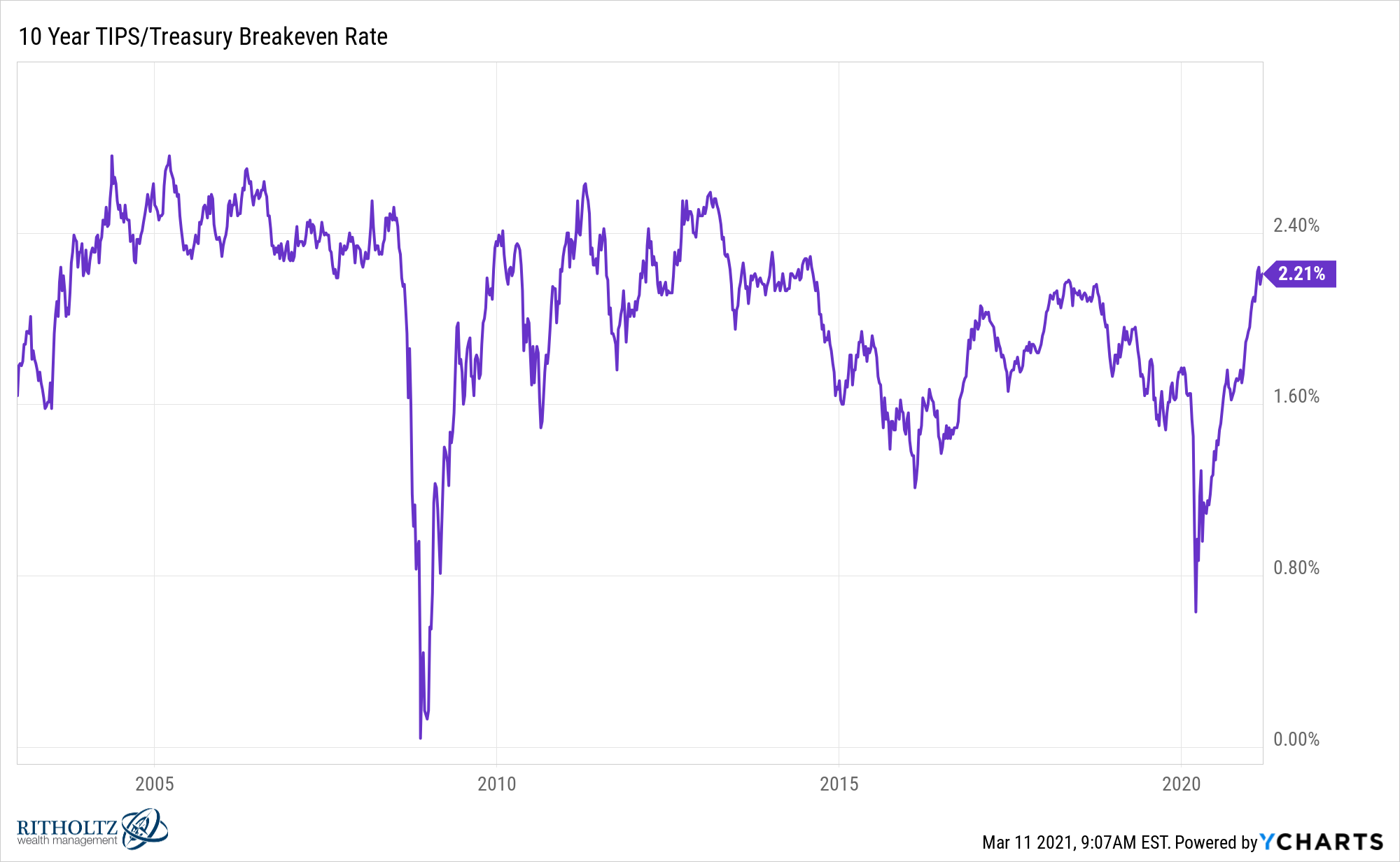 I don’t know if we’ll finally see the inflation risk people have been worrying about since 2008 but it’s certainly a risk investors are more concerned about than they have been in some time.

Inflation is always something you need to worry about as an investor because the whole point of investing your money is to keep up with or outpace the rising standard of living.

The stock market is a wonderful hedge against inflation for a few reasons.

Since 1928, the U.S. stock market is up 9.8% per year while inflation has averaged 3% per year. So stocks have grown at nearly 7% more than the rate of inflation.

So earnings and dividends both have a history of growing above the rate of inflation.

It is true that the overall stock market has historically shown lower than average returns in an elevated inflationary scenario but there are certain areas of the market that have done better in those times.

Precious metals & mining stocks have a history of low returns with enormous volatility. But under a highly inflationary environment, they tend to shine.1

Treasury Inflation-Protected Securities (TIPS) are one of the only true real assets available in that the principal amount on these government bonds goes up with the rate of inflation. It is worth noting, however, TIPS would only provide a huge boost to your portfolio with unexpected inflation. Expected inflation is already baked into the current yields.

Then there is gold but gold may not be the inflation hedge you think it is. It’s possible the massive repricing of gold that occurred in the 1970s when Nixon ended the convertibility of dollars into gold made people believe gold was an inflation hedge. But gold tends to simply march to its own drummer. Sometimes it works under deflationary crashes as well.

So stocks are still your best bet for beating inflation over the long-term and TIPS can help with unexpected inflation but there is another asset many people overlook in terms of hedging out inflation in the short-run — cash and short duration fixed income.

There are two reasons for this.

First of all, a shorter maturity is a benefit in a rising rate environment because you can quickly roll over cash equivalents like t-bills or short-term bonds into new bonds with higher yields.

You can get a better sense of this relationship by looking at how ultra-short-term bonds have performed during inflationary periods of the past.

The 1970s is the inflationary nightmare so many people worry about today. From 1968-1981, CPI was 7.6% annually. There were the nominal returns for long-term government bonds, 5 year treasuries and one-month t-bills during this time along with their corresponding volatilities:

Obviously, the returns for each were still under the rate of inflation. But one-month t-bills held up better than intermediate and long-term bonds and they did so with much less volatility.

And the great thing about short-duration assets when rates and inflation are rising is you don’t have to worry about losses. These were the annual calendar year returns for each in this time: 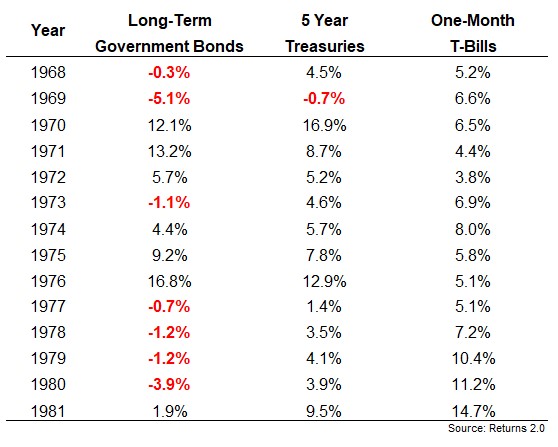 The down years are highlighted in red. You’ll notice 7 down years (out of 14 in total) for long-term bonds, just one down year for 5 year treasuries and none for one-month t-bills.3

Stocks can help protect you against long-term inflation while cash can allow you to use any short-term inflationary spikes to redeploy faster at higher rates.

Whether we get inflation or not, there are going to be all sorts of complex products and funds rolled out to take advantage of the fact that people are now worried about this risk.

Some of these products could help you under certain scenarios. Others will almost certainly be too expensive or complicated to actually do what they say they’re going to do.

Most of the time complex problems such as inflation don’t require complex solutions. Sometimes the best solution is the simplest one.

For most investors that means stocks and short-duration fixed income can get the job done if inflation becomes a problem.

Further Reading:
Could Inflation Give Us a Wonderful Buying Opportunity?

2These numbers aren’t precise but it’s pretty close. And it is worth noting this works in the opposite direction when rates fall.