Ben Carlson · Why Housing Is A Good Hedge Against Inflation

Total household debt in the United States is more than $14.5 trillion. 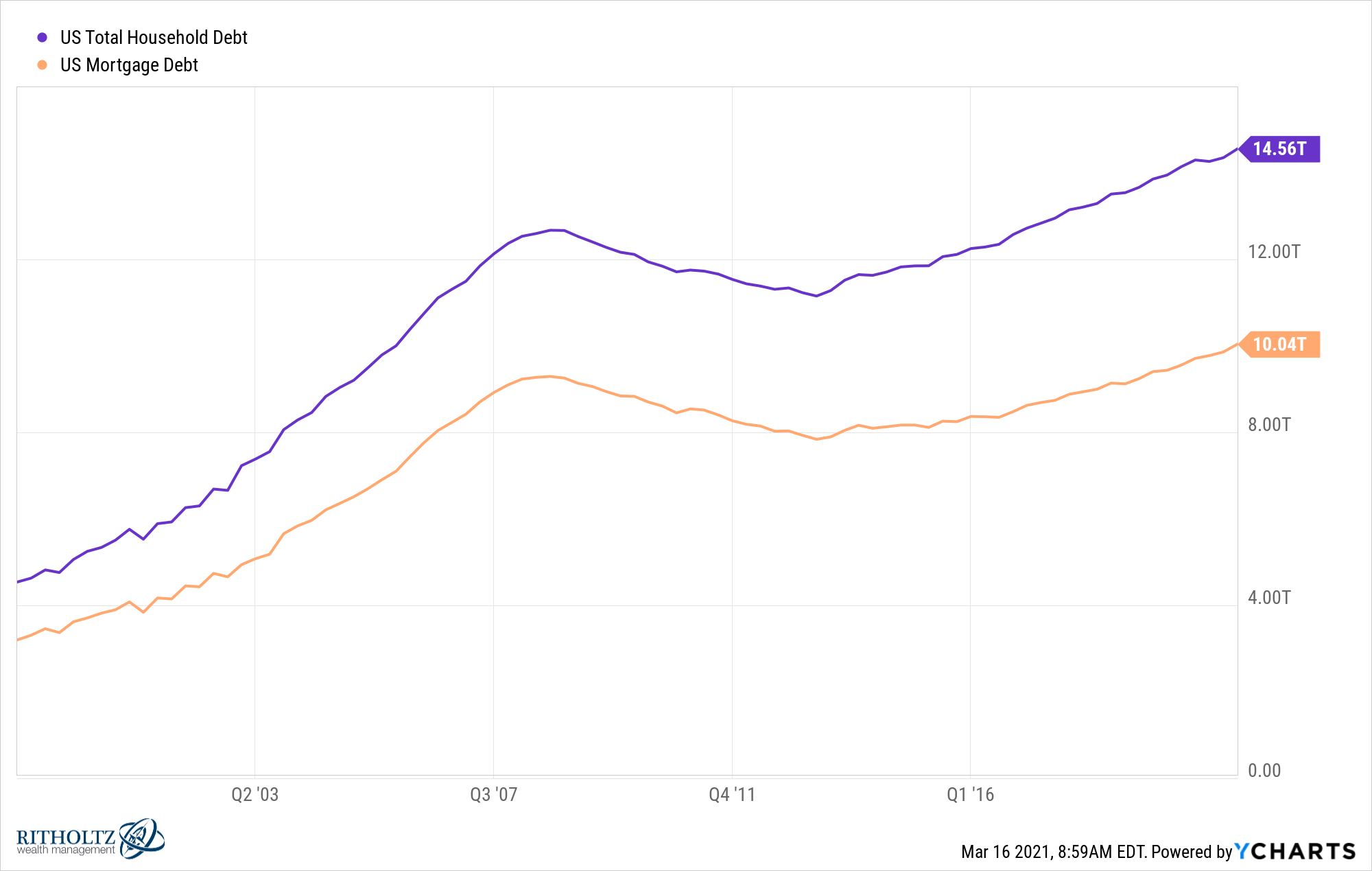 This makes sense when you consider the home ownership rate in the United States is roughly two-thirds of the population: 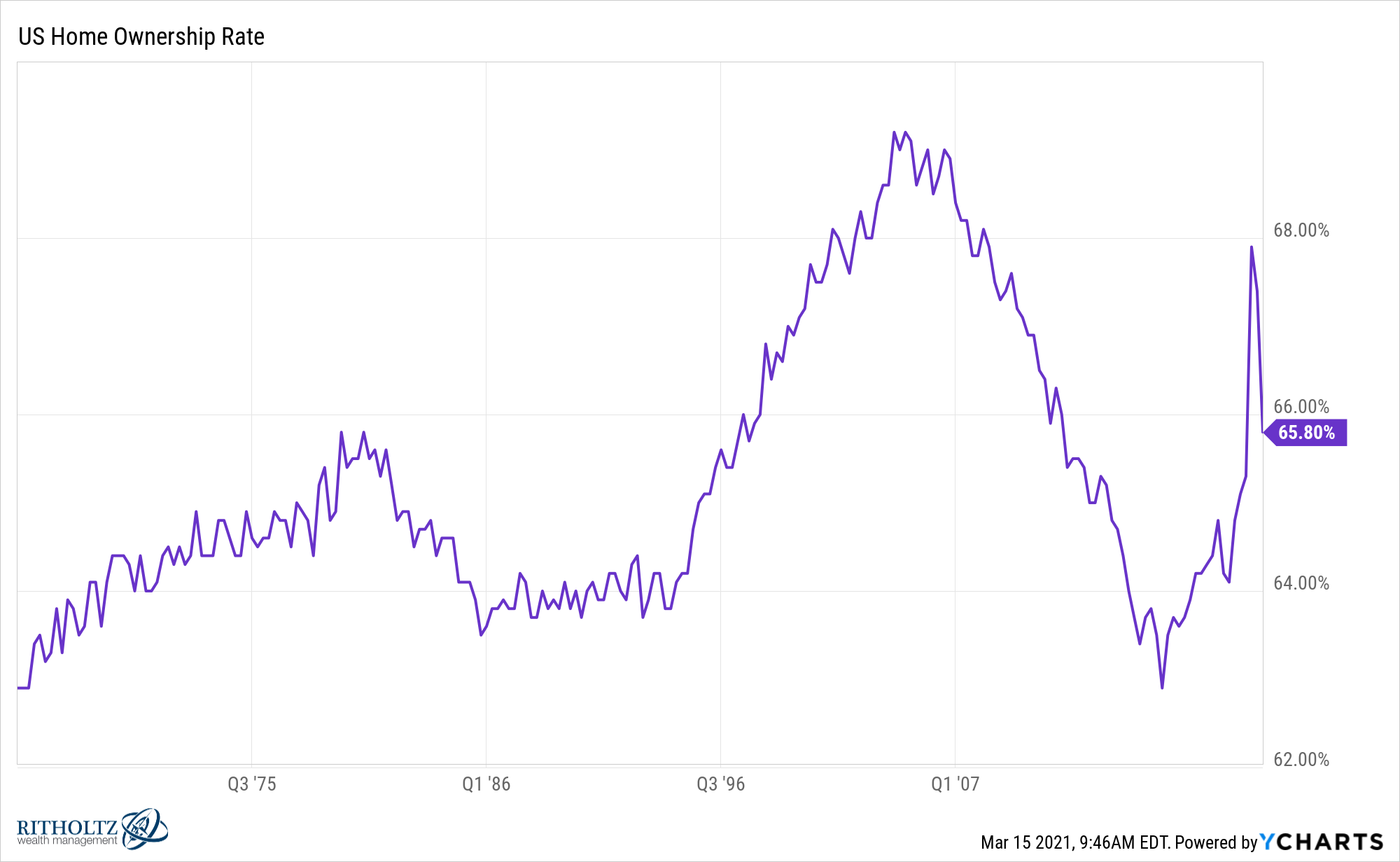 For a number of reasons, this makes housing the biggest financial asset for the majority of Americans: 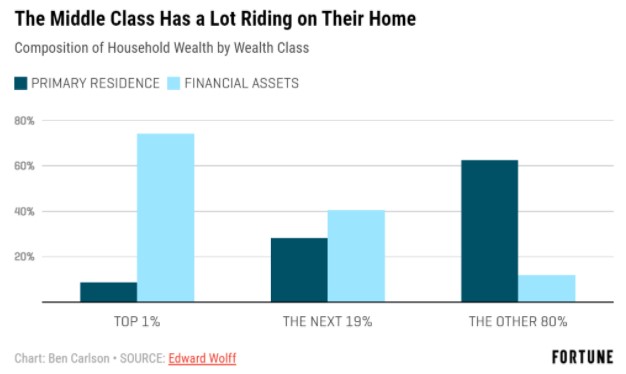 Now let me explain why a little inflation is a good thing for homeowners and why housing is one of the most affective hedges against inflation.

Here’s a chart from my latest book that shows how long it takes for inflation to cut your money in half: 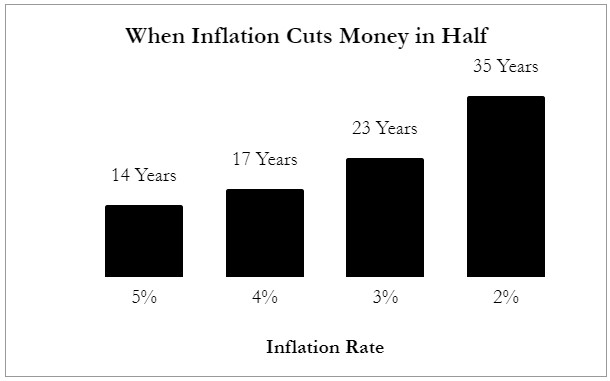 So if you took all your money and left it in your checking account or buried it in your backyard, it would lose 50% of its value in 23 years with a 3% inflation rate.

Investing is not just about building wealth, it’s also about not destroying wealth.

The same thing applies to your mortgage over time but in reverse.

The rate on a 30 year fixed rate mortgage is currently around 3%. Let’s say you take out a $300,000 mortgage at that rate, stay in the house for 30 years and pay off your mortgage based on the initial schedule (meaning no early payments or refinancing).

On the downside, yes you have to pay interest on that mortgage. That interest on a $300k mortgage works out to roughly $155k over the life of the loan. That’s a big number.

But inflation can help counteract those interest payments over time. If inflation runs at a rate of 2% per year over the next 30 years, your borrowing costs are now essentially down to 1% per year.1

Assuming inflation runs at 2% per year, this would mean your inflation-adjusted monthly payment would fall by a factor of 0.98 every year.2

This is the beauty of inflation for people who own debt.

Now things are going to become more expensive over time because of that 2% inflation but your wages should also rise over time to account for this. Plus you can grow into a mortgage payment over time since it doesn’t change.

And inflation does take a bite out of your investments over time as well.

If your mortgage payment falls 45% over 30 years from a 2% inflation rate, the same would be true for the value of a dollar. One million dollars right now would be the equivalent of $550k in 30 years after inflation.

So this works both ways.

But there’s another way housing protects you from inflation — it goes up over time.

Robert Shiller somehow put together a database of U.S. home prices going back to 1890.

After adjusting for inflation, the real growth in housing from 1890 through the tail-end of 20193 the total real return on housing in the United States was 77% or around 0.5% per year.

The housing industry of the late-19th and early-20th centuries was nowhere near as institutionalized as it is today, but even in more modern times, the returns aren’t that much better. Since 1950 it’s about 1% per year above inflation. It’s also around 1% per year real if you start from 1990.

It’s notoriously difficult to measure the returns in housing when you consider the costs, leverage and imputed rent involved in the transaction. I’m not sure anyone really knows what that return is from an opportunity cost perspective. And this average includes areas of much higher growth and areas where people lost money. That’s how these things work.

But even if Shiller’s numbers were right on the nose, earning even a small return above the rate of inflation over the long-term on a place you would like to live in anyways is a pretty sweet deal.

I don’t even think about my home in terms of investment returns because there is so much that goes into it beyond the spreadsheet component.

We have to live somewhere.

Schools and community are important to us.

And the psychic income involved in the homeownership process cannot be quantified.

But if you are one of those people who wants to quantify everything, housing is a pretty good hedge against inflation over the long-run.

Further Reading:
The Simplest Asset To Hedge Against Inflation

1This is, of course, before including the tax write-off for the interest expense but also fails to account for all of the ancillary costs of homeownership.

2Obviously, inflation is not static so I’m using simple numbers here to prove a point.

3Shiller hasn’t updated his numbers through 2020 yet.