Based strictly on valuations, the U.S. stock market is in a bubble: 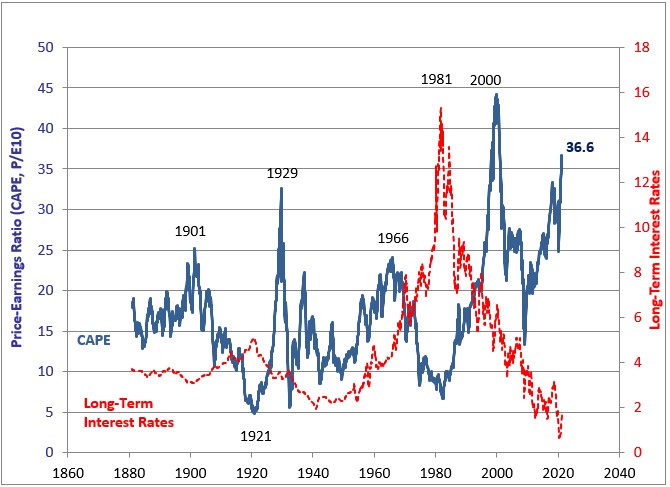 There are reasons for this.

Interest rates have been at or near generational lows for more than a decade. The housing market is on fire. Household balance sheets are the strongest they’ve ever been coming out of a recession. The stock market had been up 11 out of the past 12 years. The biggest down year was a loss of 4%. And 9 out of those 12 years saw double-digit gains.

And I haven’t even mentioned the most accommodative fiscal and monetary policy in history. The economy is ready to boom.

The U.S. stock market should be in a bubble.

If ever there was a set-up for a stock market mania, this is it.

And yet…this doesn’t feel like the kind of mania that’s detached from reality. In many ways, the current state of affairs in the stock market makes sense.

On a recent episode of Jim O’Shaughnessey’s Infinite Loops podcast, the pseudonymous Jesse Livermore made a distinction between two types of bubbles — rational and irrational:

They’re rational bubbles, and there are irrational bubbles. So let me go with an irrational bubble. Let’s suppose you had something like Bitcoin, let’s take an example of something like that that’s just trading at some exorbitant, ungodly multiple of its intrinsic value and it’s possible to increase the supply. The owner can make the supply increase. That would be an irrational  bubble because now you have a mechanism to bring the price back to intrinsic value, or to bring it back in that direction, which is going to be the dilution you’re going to experience.

Another example would be a bubble that’s built around some false conception or some false prediction or anticipation of like a new world. Like we’re going to just go into a new era, and if you know that that’s wrong, the bubble can be irrational because it’s based on these expectations that are not true. That are not going to become reality.

So with all that said, I would say then, crypto assets are a rational bubble because there is no mechanism to force them back to their intrinsic value. All of the risk now is in the price, and that’s why I’m so uncomfortable, I have no idea how to price it. There is no way to know.

Livermore uses bitcoin as an example of a rational bubble right now because there isn’t a logical endpoint to the price rise.

It’s actually an interesting thought experiment to consider how much crazier the stock market would be right now if crypto didn’t exist. You could make the case crypto has kept a lid on a massive blow-off top in stocks simply because so much speculative demand has gone to that space in the past few years.

I think the stock market is in a rational bubble as well and that’s what makes using valuation more or less impossible right now.

What other choice does it have?

Anyone who assumes the “intrinsic” or “fair” value of the stock market is 50% or 60% lower is using some valuation as a catalyst is likely going to be sorely mistaken and has been for years.

Livermore explains the problem with all valuation metrics today:

The problem with any valuation metric right now is that to know what returns are going to be using valuation as a forecast, you have to know what the final valuation is going to be. So if I want to know what the return on the S&P 500 is going to be from today to the next 10 years, I have to know how assets are being priced 10 years from now. And it could be the case that maybe the price to integrated equity or the price to sales or the price to earnings, those could all be elevated now. But if they get more elevated, then using this framework, all that’s really saying is the prices will have gone up. And basically things will have been more expensive than they are now.

Consider Robert Shiller’s CAPE valuation which is the chart I used at the outset of this post as a bubble proxy. The cyclically adjusted price-to-earnings ratio looks at the current price of the market relative to the past 10 years’ worth of earnings, adjusted by inflation.

When Facebook came public in 2012, the combined sales for the 5 tech giants was $290 billion. So in a little more than 9 years, the 5 biggest companies in the U.S. stock market have grown their sales by more than 310% or roughly 17% per year.

This is why the CAPE ratio is an imperfect valuation measurement. Yes, it smooths out the business cycles by looking at the average earnings of the past 10 years. But what earnings from the tech behemoths matter more to the market right now — the $290 billion from 10 years ago or the current $1.2 trillion?

I’m not saying stocks are cheap by any means. They are definitely expensive. I’m just trying to say it might not matter, for a time anyway.

The biggest risk here is obviously rising inflation and higher interest rates. Historically, the stock market has done just fine in the initial stage of rising rate environments but returns tend to slow a great deal when inflation is rising and above 3% for an extended period.

These rules aren’t written in stone, of course. Investors could easily get spooked by rising rates and/or inflation much sooner this time around. The truth is we’ve never dealt with rates this low before combined with this much government spending.

The closest parallel would be the period following World War II but there are enough differences to make that comparison null and void.

The most unanswerable question of all is this: What will investors be willing to pay for stocks in the future?

I have no clue.