If you dig into the components of the consumer price index, you’ll notice housing makes up a big part of the government’s inflation calculation.

The latest data from the BLS shows owners’ equivalent rent makes up nearly 25% of the CPI calculation (food and energy currently make up 14% and 7%, respectively, for comparison purposes).

With housing prices rising at a rapid clip, many people share the sentiments of Microstrategy CEO and bitcoin uber-bull Michael Saylor:

If housing prices are rising so fast, inflation must be out of control, right?

It’s not like every person in America is buying a house every single month. In fact, I’ve seen stats that show the average length people stay in their homes is somewhere in the range of 8-13 years.

The numbers vary slightly but basically two-thirds of the country own a home: 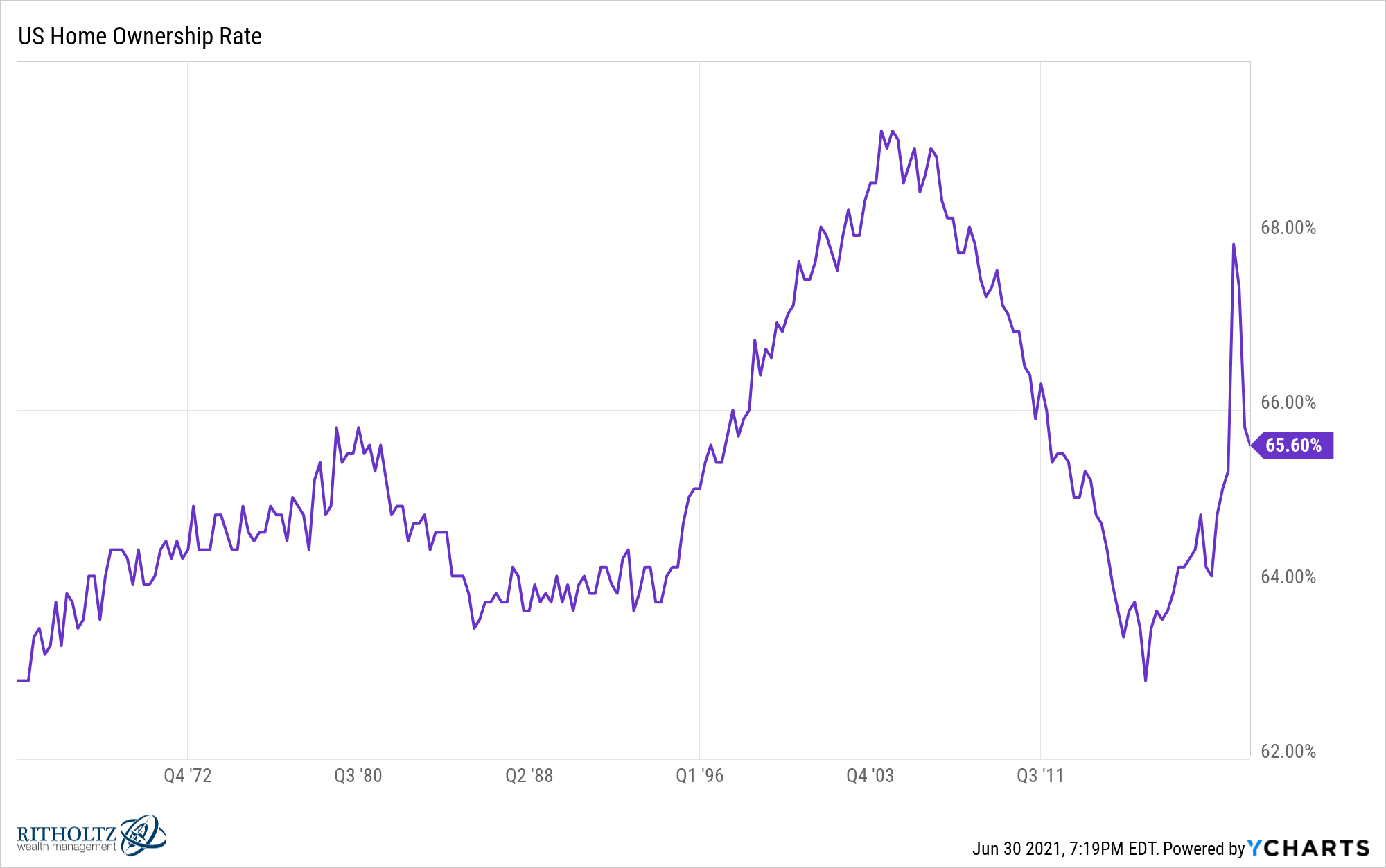 So the majority of households aren’t experiencing inflation in their homes, they’re seeing the price of an asset they own rise in value. That’s the opposite of inflation.

If you own a home this is a good thing. Your asset is rising while your debt is going down as you make payments. 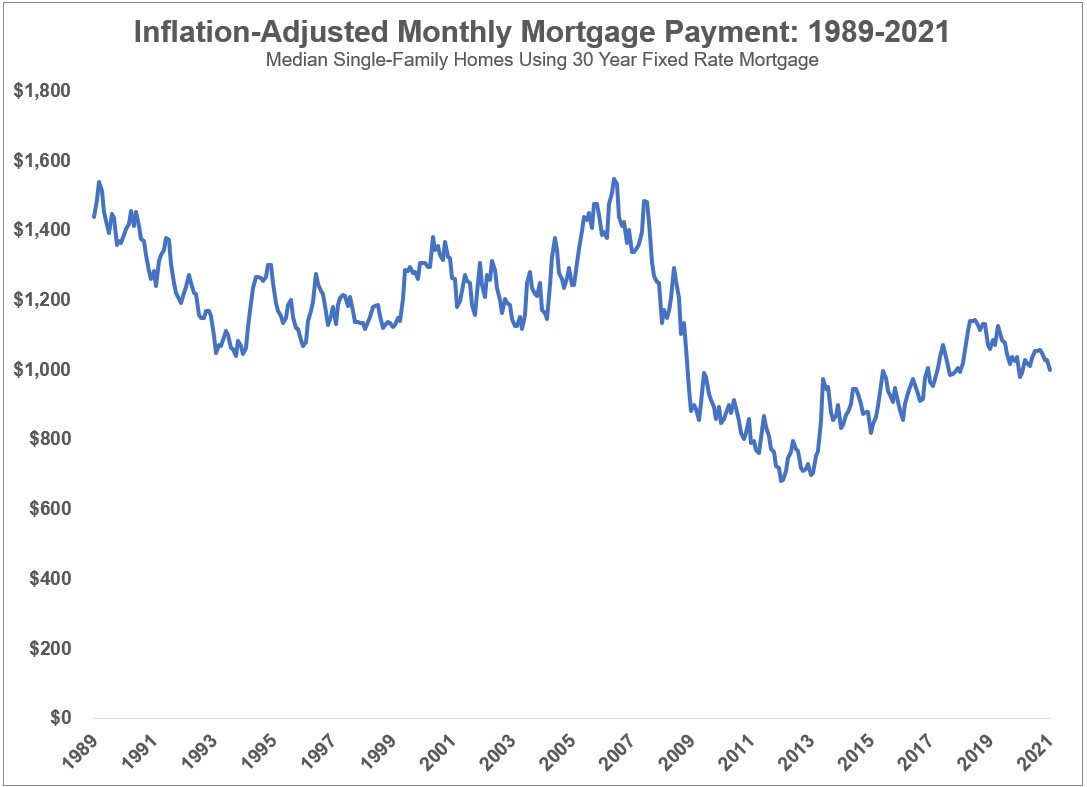 Here’s what I wrote about this chart back in March:

After adjusting for inflation and interest rates, monthly mortgage payments are now 30% lower than they were in 1989.

Owning a home with a fixed-rate mortgage remains one of the best hedges against long-term inflation there is.1

Of course, rising home prices aren’t great for first-time homebuyers. If you don’t own a home but would like your piece of the American dream it probably feels like an ever-widening gap between the haves and have nots.

While low interest rates have certainly helped when it comes to keeping monthly payments low, you still have to come up with a down payment.

This is an area we’re starting to see house wealth inequality rear its ugly head.

According to the National Association of Realtors, the number of home-buyers who are coming to the table with a 20% down payment or more continues to rise:

The NAR also said a quarter of existing home buyers paid cash. First-time homebuyers are going to have a hard time competing in this game: 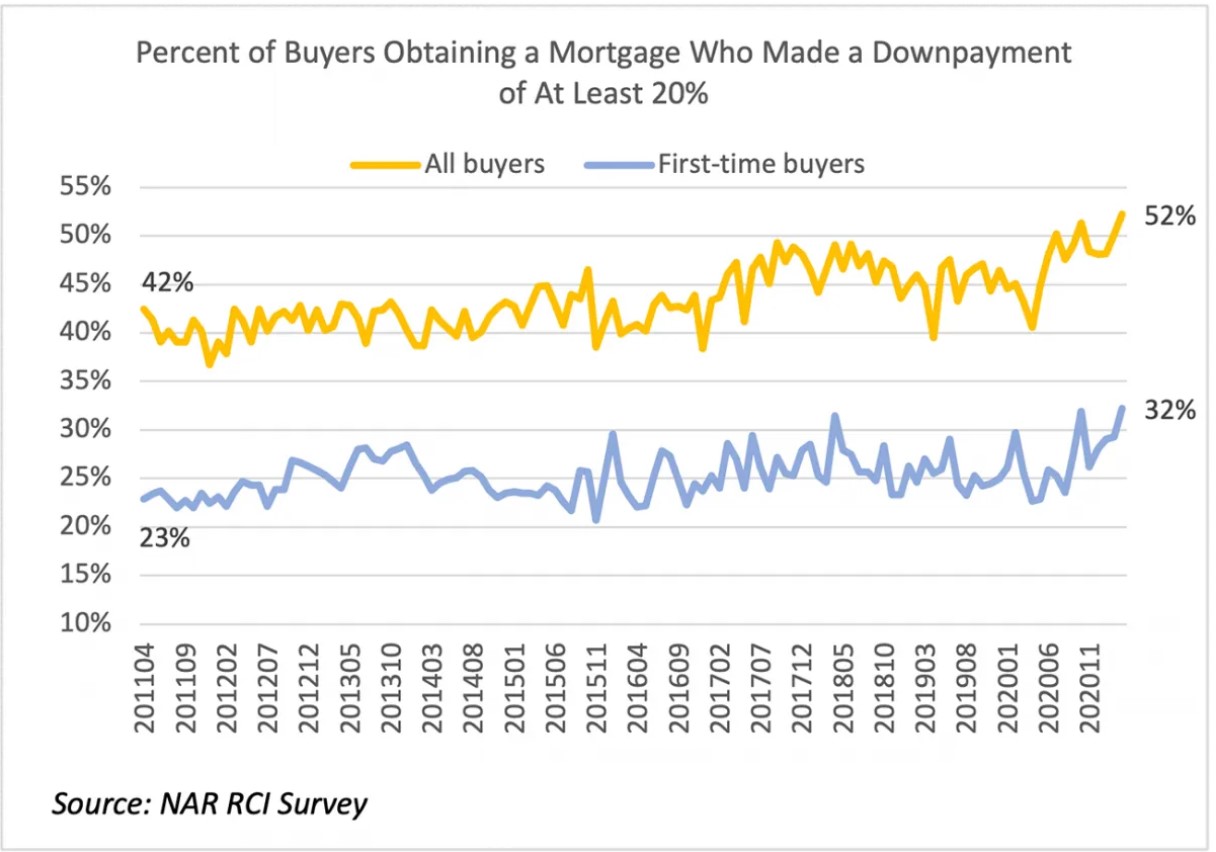 The reason this matters is because sellers have the upper hand right now in a big way and don’t want to waste their time with contingencies or problems with banks when it comes to lending.

People who come to the table with cash or a bigger down payment can help speed up the process.

This also applies to those who have a ton of equity in their homes looking to buy elsewhere.

Yes, when you sell at a higher price you also have to buy something else at a higher price. But if you’ve owned a home for more than a couple of years you likely have plenty of equity built up to use as a down payment on your next home if you’re looking to move.

In that case all you have to worry about is the monthly payment and taxes.

And if you’re looking to apply some geographic arbitrage by moving to a lower cost of living area because of the remote work boom, you’re in an even better position.

“If the house is pretty attractive, we might see anywhere from 30 to 50 offers, and the Californians tend to win because they understand this game a lot better than the Texans,” said Ray Shapley, the Rubbiccos’ real estate broker and an Austin native. More than half of his clients are now from California.

“The pricing power of Austin, which is number one in the country, is driven by California, plain and simple,” Toll Brothers CEO Douglas Yearley said on an earnings call last month. “The phenomenon is fascinating. We’ve never seen migration like this.”

Unfortunately, we’re in a market environment where those who already belong to the housing club are reaping the rewards while first-time homebuyers in are in a tough spot.

If you own a home your wealth has been compounding at a healthy clip.

If you don’t own a home, it has to feel like you’re on the outside looking in.

Owning a home is not for everyone. But if you are in the market for your first home today, it probably doesn’t feel like a level playing field.

This is why inflation is so personal and circumstantial.

1Taxes obviously can and will rise over time. But my experience with property taxes is they tend to operate on a lag from market prices.