Sometimes it’s pretty easy to understand why so many regular people are confused by the markets. A number of prognosticators now think the biggest risk is an overheating economy. Imagine trying to explain to someone who doesn’t know much about the markets or economy how it could be a risk that the economy is too strong?!

Most people assume that risk comes in the form of inflation these days.

Here’s a piece I wrote at Fortune explaining why inflation is a risk for the markets and why it matters more than interest rates.

Throughout the first half of the pandemic, interest rates went in one direction—down. After bottoming out at 0.5% toward the end of the summer, 10-year Treasury yields are finally on the upswing. 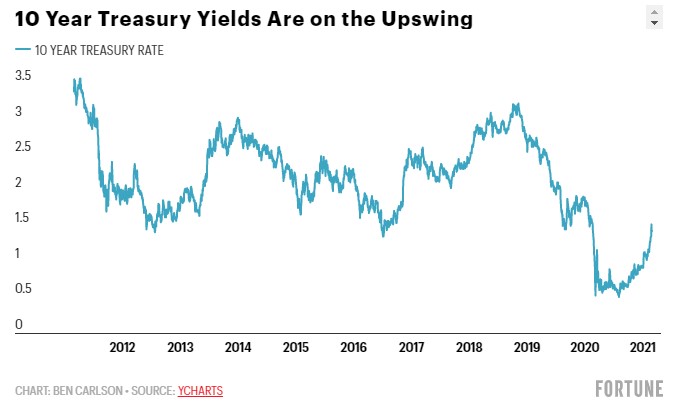 No one knows the precise reason for the increase in rates, but inflation expectations are rising now that there is light at the end of the tunnel for the pandemic. When rates are rising because investors expect economic growth to be higher in the future, that’s a good thing.

But investors always worry about risk, and there is fear this rise in rates could derail the stock market. That is certainly possible, but history shows the stock market holds up well in rising rate environments.

I went back to 1950 to find each instance where the 10-year Treasury yield rose by 1% or more to see how U.S. stocks performed when bond yields were moving higher: 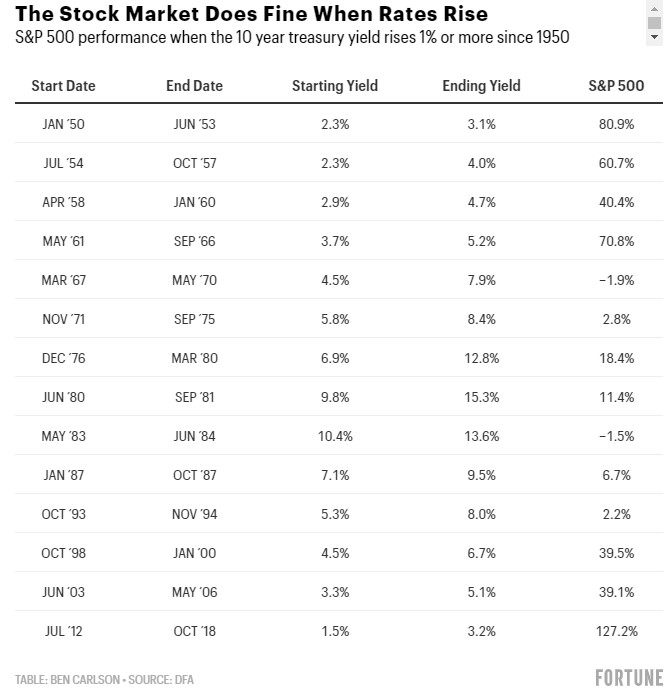 There have only been two instances where stocks fell during a rising rate environment. In fact, the annualized returns in each of these periods where rates rose 1% or more was 10.5%, which is right around the average long-term return for the U.S. stock market.

It is worth noting some of these rising rate environments did precede some nasty stock market falls. Rates raced higher in 1987 right before the biggest one-day crash in history in October of that year. And rates rose in the final couple of years in the late-1990s dot-com bubble as the Fed was trying to snuff out a speculative mania. Eventually, it worked, and stocks got cut in half.

But we certainly don’t know the exact level of rates in which investors would determine things have gotten out of hand. There is no line in the sand on these things. It’s more of an exercise in psychology than anything.

So if it’s not rising interest rates investors need to worry about in the current environment then what should you be looking for?

Since 1928, the average annual inflation rate in the United States is right around 3%. Based on the average returns for the S&P 500 in that time, the stock market would prefer the inflation rate stays below that level and that it’s falling not rising.

Inflation is still quite low by historical standards today, at around 1.4% over the past year. But inflation expectations, as measured by the five-year break-even inflation rate, are now at their highest level since 2013 at 2.4%. That’s still below the long-term average, and actual results don’t always line up perfectly with expectations.

Rising interest rates and inflation expectations are a good thing for the economy. Each of these variables is pricing in higher economic growth from the potential end of the pandemic and the ensuing spending boom it could bring about from consumers.