In doing some research for my stock market explainer piece from last week I came across a crazy but true stat about the stock market:

The feedback on these types of stats is something of a Rorschach test for investors.

I got the usual comments about Japan, buy & hold doesn’t work, maybe people should time the market, this is just fun with numbers, yada, yada, yada.

Maybe the best and worst part about the markets is the fact that two investors can look at the same exact data and come to completely different conclusions.

Here are some of my initial thoughts after stumbling onto this stat:

The height of the dot-com bubble might be the worst entry point in U.S. stock market history BUT… I’ve written about investing in early-2000 before. Valuations were as high as they’ve ever been and a lost decade followed, bookended by two market crashes. So even after a strong period of returns in this decade, the entire century has been below average.

Having said that, you still tripled your money over the next two decades!

Annual returns from the start of the year 2000 through the end of August 2019 were 5.9%. How many investors in U.S. equities would sign up for 5.9% annual returns over the next 20 years right now?

Could you have done better elsewhere? Sure, a number of asset classes have outperformed U.S. stocks over the past 20 years or so: 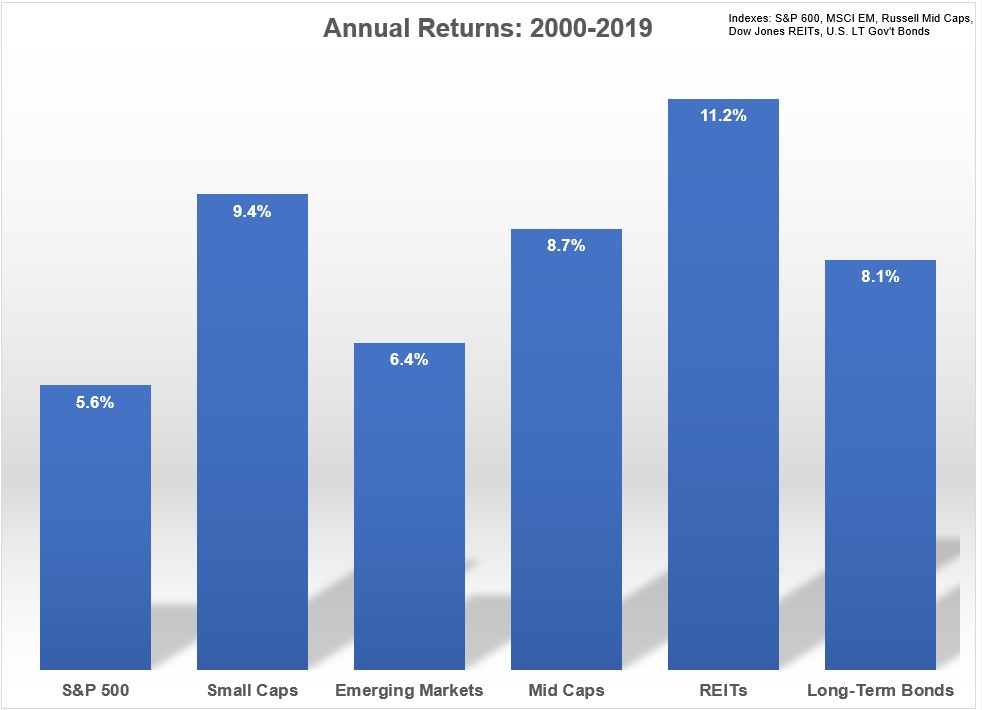 This is why you diversify — no one knows which asset classes will work better or when.

But I don’t think a tripling of your money over the course of two decades is a reason to give up on an asset class just because other areas of the markets did better.

The past 10 years or so have been great for anyone invested in U.S. stocks. The previous decade was crap. The two decades before that were unbelievable. The decade before that was not fun. I could continue.

One period of inconsistent or poor returns isn’t a reason to give up on the stock market. That’s how it works.

Timing matters but that doesn’t make it easier to time the market. A number of people shared with me that they had the misfortune of beginning their savings career at the start of the century.

Most people saw this as a bad thing. I actually think it was a blessing in disguise for those who began investing at the outset of a lost decade.

My datapoint makes for interesting fodder but no one actually invests like that (two random lump sums at two different extremes). The majority of savers slowly put money into the market over time from their paychecks. Yes, a lump sum invested in 2000 going into U.S. large cap stocks wasn’t the best timing but most people had the opportunity to dollar cost average over time and buy shares at lower prices.

People who began investing in 2009 or since have had a much easier run.1 But those who dollar cost averaged into a 401k, IRA or brokerage account during the lost decade of the aughts had a number of years to buy cheap shares before they took off like a rocket ship over the ensuing decade.

Others may have retired in the late-1990s or early-2000s and had the misfortune of living through two huge bear markets just when they stopped making periodic contributions.

Luck plays a larger role in the investment process than most people are willing to admit.

Sometimes the markets don’t give us the returns we want when we want them.

But don’t be surprised if and when certain markets go through periods like this in the future. This is how markets generally work.

1I began saving for retirement somewhere in the middle, around 2005 or 2006. It actually worked out pretty decently because I was forced to deal with a nasty market crash and continually invest at lower prices early on in my investing career.