Thinking and acting long-term for the long-term is one of the few edges remaining in the markets. Bring up this idea and there will almost always be someone waiting to take the other side with the ‘what about Japan?’ argument.

Japan’s two-and-half decade economic and market struggles make for some important lessons but most investors seem to have the wrong takeaways.

One of my favorite market history books is Devil Take the Hindmost by Edward Chancellor. The book provides one of the best historical accounts of financial speculation that I’ve read. Some of my favorite anecdotes and stats came from the section on the Japan real estate and stock market bubble from the 1980s:

Over the next decade the Japanese stock market lost roughly 80% of its value (which is still far below that peak today):

Meb Faber also has a great chart on how truly massive the Japanese bubble was in terms of its CAPE valuation relative the U.S. tech bubble: 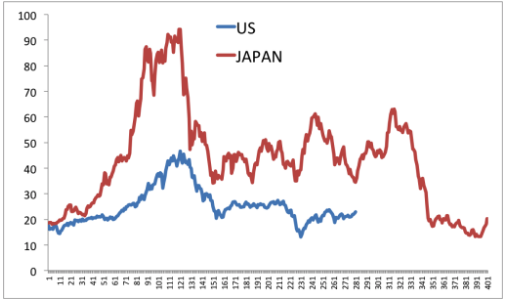 This was a bubble of massive scale in both stocks and real estate.

The returns also tell the story when you break them down by different periods from 1970 through 2015:

Japan has surely been a cautionary tale since since 1990 but you have to take into account how truly insane the markets went to get to that point.

Here are some of the wrong lessons investors have taken away from Japan’s bubble deflating:

And the right lessons:

Source:
Devil Take the Hindmost: a History of Financial Speculation

Further Reading:
The Timeless Nature of the Herd Mentality