According to the National Bureau of Economic Research, the U.S. economy peaked in February and officially entered a recession in March.

This is a newsflash to exactly zero people.

When the pandemic hit and the economy was put in the freezer, it was immediately obvious the longest economic expansion in this country’s history came to a screeching halt.

It was not only the sharpest contraction in history, it was likely the shortest recession ever. The economy probably bottomed in April and has begun growing again. This does not mean we are back on trend from pre-COVID days but it appears there is an expansion from a very low base in March and April.

Prior to this year’s bizarre economic downturn, the shortest recession in modern history was in 1980 and lasted 6 months: 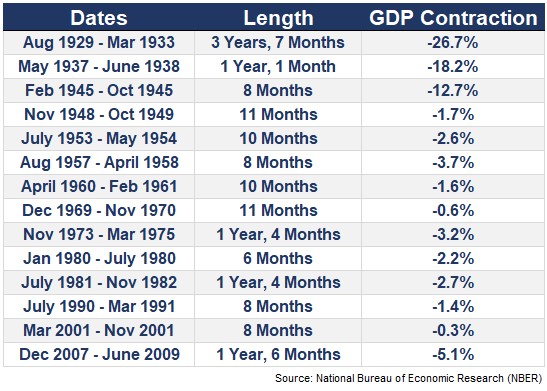 The current recession is unique for a number of reasons but perhaps the biggest difference between this downturn and previous versions is the fact that no one really knew when they started or ended.

There was time contemplate the damage and guess when it would come to an end or what the exact cause was. There is still plenty of uncertainty now but it’s of a different kind.

The stock market’s performance this year continues to confound but investors are forced to extrapolate an economic situation we’ve never come close to seeing before.

It may come as a surprise to some investors but during the actual recessions of the past the stock market has been up as much as it’s been down: 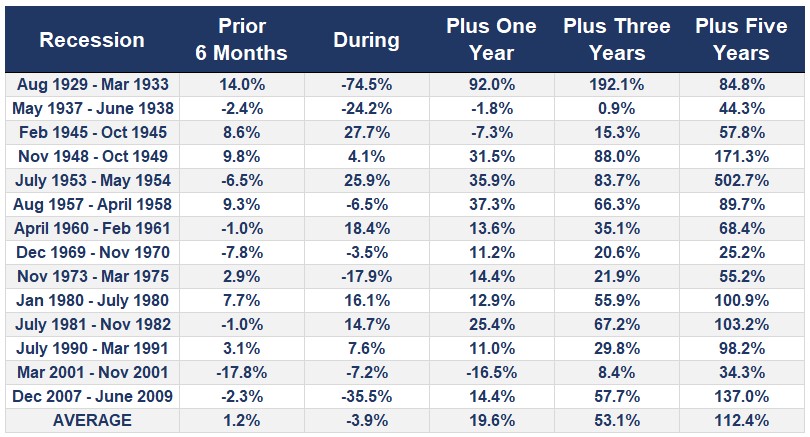 Not including the current contraction, there have been 14 recessions since the Great Depression. In 7 out of those 14, the S&P 500 has seen positive returns during the actual recessionary period.

The usual caveats apply — the stock market is forward-looking and never matches up perfectly with the economy and so on but this time around things are happening so fast there’s no time for the usual economic worries and debates.1

The stock market hasn’t done a great job predicting recessions in the past either but you can see performance after the fact have been solid across the board.

The problem with the current period is the economy was given such a huge jolt that even the recovery will end up feeling like a nasty recession based on past experience.

Yes, we’re growing but things are still operating at a fraction of the economy of 3-4 months ago.

The unanswerable question for investors is this: Will the market be content with things getting better on a relative basis or will the absolute level of economic activity eventually overwhelm sentiment?

I suppose a lot of this depends on any potential future shocks or setbacks.

No one knows what to think, which baselines to use, or the correct way to handicap the current situation.

The market is just as confused as everyone else.

We should probably get used to it.

1This is true of fiscal and monetary policy as well. It’s all happening so fast.