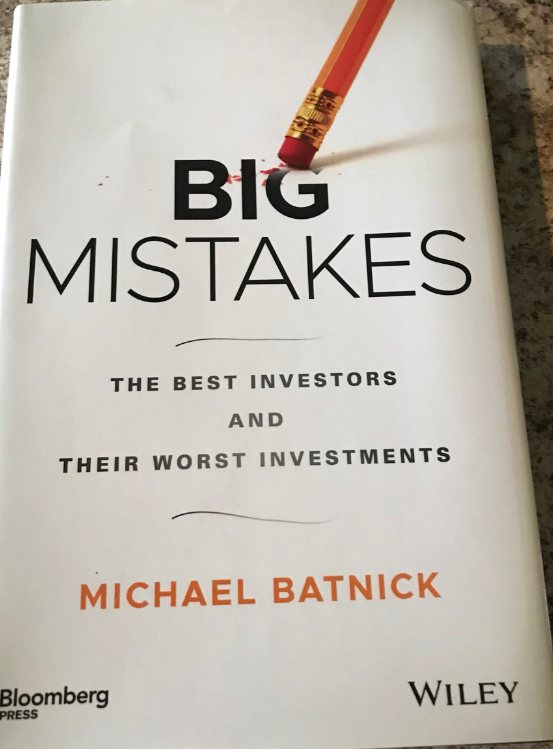 There are far too many investing books that dissect the past successes of history’s greatest investors. These books make it easy for investors to assume emulating these greats should be effortless. I know that’s what I thought when I read about Buffett and Graham when I first started investing.

Most investors would be far better off trying to avoid mistakes than replicate their favorite billionaire’s track record. This book chronicles every mistake imaginable in the markets and it does so in a refreshing way by showing even the most intelligent among us screw up.

Here are six things I learned from the book:

1. Success in one avenue of life doesn’t automatically translate into success in the markets. Mark Twain is perhaps one of the greatest writers who ever walked the earth. This greatness may have made him one of the worst investors to ever walk the earth as well. I didn’t know much about Twain’s experience as an investor but Michael writes, “Mark Twain compiled a list of failed investments longer than a pharmacy receipt.”

The number of schemes and failed businesses Twain invested in would make a professional athlete blush. And not only was he terrible at choosing what to put his money in, he also passed on one of the greatest inventions of all-time:

He wasted $42,000 on an engraving process called a kaolotype that was supposed to revolutionize illustrations (it didn’t), and then decided to pass on Alexander Graham Bell’s telephone.

This was my favorite profile in the book.

2. Even Benjamin Graham got slaughtered during the Great Depression. Graham is the father of value investing, Warren Buffett’s mentor, and the author of the greatest and/or most read investment book ever written. By all accounts he was a pioneer in the world of fundamental investing, discovering and writing about techniques investors now take for granted, and performing analysis on company fundamentals before computers and the Internet made everything so much easier.

Despite all of this, Graham still got destroyed during the Great Depression. And not only did he get destroyed, he did so through the use of leverage:

In 1930, thinking the worst was over, Graham went all in and then some. He used margin to leverage what he thought would be terrific returns. But the worst was not over, and when the Dow collapsed, Graham had his worst year ever, losing 50%. “He personally was wiped out in the crash. Having ducked the 1929 cataclysm, he was enticed back into the market before the final bottom.” In the four years from 1929 to the bottom in 1932, Graham lost 70%.

The man who introduced millions of investors to the term “margin of safety” forgot to leave himself one in the worst market crash in history.

3. You cannot avoid losses in the markets. As the title suggests, Michael profiles some of the worst investments from some of the world’s greatest investors (Stanley Druckenmiller, John Maynard Keynes, Jesse Livermore, Michael Steinhart and more). And all of these people lost an insane amount of money at multiple points in their investing career. You have to become comfortable with seeing your portfolio fall in value if you ever hope to make money over time in the markets.

The chapter on Charlie Munger drove this point home when discussing Munger’s losses in the 1973-74 bear market:

Here’s the difference between Munger and most investors — he actually expects to lose money on occasion. He builds it into his investment process which helps him control his emotions when it does happen. Far too many investors hope and pray that they’ll never experience a market or portfolio crash. It’s just not realistic.

4. Know thyself. There is no right or wrong way to invest for every individual or organization. I have my feelings about the right way to do things and I’m sure you the reader have yours as well. The thing I’ve learned over time is that even the best investment strategy is worthless if it doesn’t align with your personality, values or way of looking at the world.

Michael writes, “It took me around five years and nearly $20,000 in commissions to realize that I was not destined to be the next Paul Tudor Jones. I was too emotional to be a successful trader, which led me into the arms of Bogle’s index funds.”

5. Recognizing your mistakes is one of the best ways to learn from them. One of my least favorite practices in the money management industry is moving the goalposts or blaming others for your own mistakes or poor performance. I’ve witnessed countless fund managers and pundits do this over the years. It’s a huge red flag in terms of character. Everyone makes mistakes or is wrong in the markets so the best route, especially in a world where everything is documented or saved on the Internet, is to flat-out admit when you’re wrong and try to figure out why.

I loved this anecdote from Michael in the Warren Buffett chapter:

In fact, one of Buffett’s strengths is in recognizing that mistakes are part of the game. Buffett has included the word “mistake” 163 times in his annual letters. He, like everybody else who has ever put a dollar into the market, is no stranger to lousy investments.

This extends beyond the investment world as well. Fessing up to your mistakes is a great way to build trust.

6. Sometimes brutal honesty is the best medicine. My friend, podcast co-host and colleague Michael is one of the most straightforward, tell-it-like-it-is, don’t-sugar-coat-it, honest people I know. But he does so in a constructive way. My Midwestern attitude towards the world has always been to avoid confrontation and sweep things under the rug, so I’ve learned a lot from him in terms of being more up-front with people. And he’s not just honest with other people; he’s honest about his own abilities and mistakes as well.

In the final chapter of the book, Michael lays it all out there and fesses up to the many mistakes he made in the markets early on in his career. He also talks about some of his biggest regrets in regards to his education when he was younger. It takes a lot of guts to put yourself out there like this. This last chapter is my favorite in the book because it shows how a regular person, not just your favorite billionaire investor, can turn failures into successes.

I know Michael put a ton of effort into his research for this book because he was sharing snippets of it with me throughout the writing process. The stuff that was left on the cutting room floor could probably be its own follow-up book. I can’t recommend this one highly enough. Go pick up a copy:

Big Mistakes: The Best Investors and Their Worst Investments

And listen to us discuss how Michael got the idea for the book on this week’s podcast: