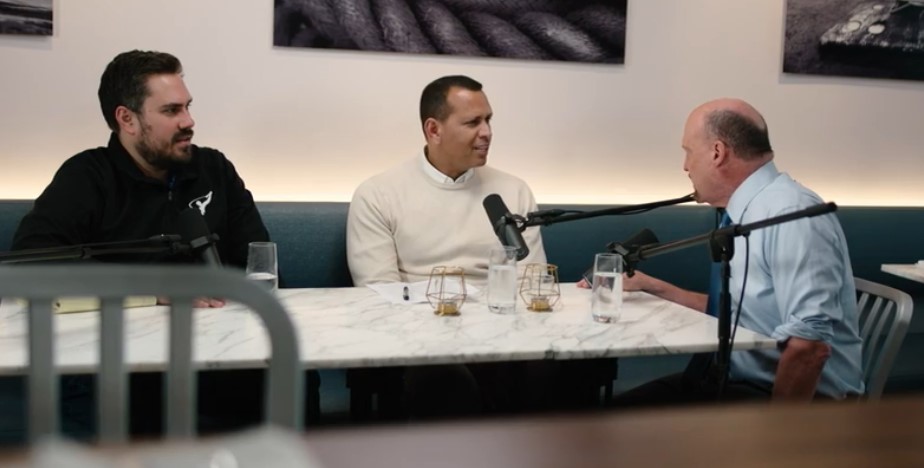 Dan Katz (Big Cat of Pardon My Take fame) and Alex Rodriguez (J Lo’s boyfriend) had Mad Money’s Jim Cramer on the latest episode of their podcast, The Corp, this week.

Big Cat is not alone in his worries about the enigma that is the stock market. People involved in the markets often take for granted how scary a proposition the stock market can be for those outside this world.

Cramer didn’t spend a ton of time on his answer because they were jumping around from topic to topic so I wanted to do a deeper dive on this.

I’ll try to make this as simple as possible and put it in terms of sports as well. Here goes.

The stock market allows you to earn a share of the corporate world. Short of owning your own business, buying shares in the stock market is the simplest way to own a slice of the business world.

Buying shares in the stock market makes you a part-owner in those companies, entitling you to a share of their profits, shareholder payouts, and growth.

Let’s say you had the ability to invest in every professional athlete in the major pro sports. Each year you would get a share of their earnings, along with the growth potential for higher contracts in the future.

There would be busts, flameouts, and injuries along the way. For every Peyton Manning and Tom Brady, there’s a Ryan Leaf. But the overall trend would be higher and your piece of the collective earnings of these players would grow over time, along with any appreciation in their brand.

This is the stock market except Peyton Manning is Microsoft, Tom Brady is Apple, Ryan Leaf is Pets.com, and the Texans signing Brock Osweiler to a $72 million contract is the equivalent of buying Blue Apron at the IPO price.

The stock market might be rigged a little but so what? There will always be unscrupulous deals, insiders, and investors with big pocketbooks who get better deals simply because of the amount of money they have or their reputation in the business.

Yet small-time investors still have the opportunity to buy shares in hundreds or thousands of businesses for pennies on the dollar in simple index funds, ETFs or targetdate funds. Or you could buy shares in some of your favorite businesses for free on apps like Robinhood.

You’re still buying and selling on the same marketplace as the richest of the rich investors. This would be like your Saturday pick-up hoops league being able to play on the same court as LeBron.

So what if there are a handful of people or companies who get sweetheart deals? If you don’t like the practices of high-frequency traders or Wall Street bankers, don’t try to compete at their level.

I’m ignoring the effects of fees, taxes, trading costs, etc. here but the point remains that over the long haul, the stock market is unmatched as a money compounding machine. And the longer you’re in it the better your chances of compounding.

Michael Jordan didn’t win his first championship until he was 28, his seventh year in the league. Sometimes you have to put your time in before you experience success.

The stock market is defined by both risk and reward. There is another side to this long-term compounding machine. Stocks can rip your face off over the short-term.

If there is an ironclad rule in the world of investing, it’s that risk and reward are always and forever attached at the hip. You can’t expect to earn outsized gains if you don’t expose yourself to the possibility of outsized losses.

The reason that stocks earn higher returns than bonds or cash over time is because there will be periods of excruciating losses in stocks.

So $1 growing turning into $1,700 sounds amazing until you realize the fluctuations it took to get there. The stock market goes up a lot over the long-term because sometimes it can go down by a lot over the short-term.

Patrick Mahomes occasionally throws interceptions with his deep balls and no-look passes, but it’s worth the risk for the number of TDs he throws.

But no one really knows what these cash flows will be with any certainty. It’s impossible to predict where human ingenuity or emotions will take us or what the future economic environment will look like.

Markets are run by differences in opinions, goals, time horizons and personalities so stocks trade in the short-to-intermediate-term based on emotions, not fundamentals.

And the biggest reason for this is because people can lose their minds when they come together as a group. As long as markets are made up of human decisions it will always be like this.

Think about how crazy fans can get when their team wins, loses or gets screwed over by the refs. These same emotions work when money is involved.

The stock market is a bet on the future. Stocks can be thought of as a way to ride the coattails of intelligent people and businesses as they continue to innovate, grow, and create value.

It has never paid to bet against human ingenuity. Stocks are a way to own a piece of the profits, dividends, innovation, collective wisdom, growth and future cash flows of the corporate world.

I don’t know what’s going to happen to the future of the pro sports leagues. The NBA is on the rise (FANG stocks?), the NFL seems to be plateauing or at least slowing down (blue chips?) while Major Leauge Baseball may be in a state of decline in terms of popularity (European stocks?).

But I wouldn’t bet against the collective ability of these leagues to generate revenue, appreciation, and profits going forward, much like the stock market.