I recently learned Fortune Magazine was created just 90 days after the stock market crash of 1929 began. It’s impressive that the brand has had such staying power over the years, especially in light of the ever-changing media landscape of the past couple of decades. I’ve always been a huge fan of Fortune’s business and market profile pieces over the years and the long list of great writers they’ve had. So I jumped at the chance to begin writing for them when the opportunity arose.

Here is my first piece that was published a couple of weeks ago about how to win any debate about the markets.1 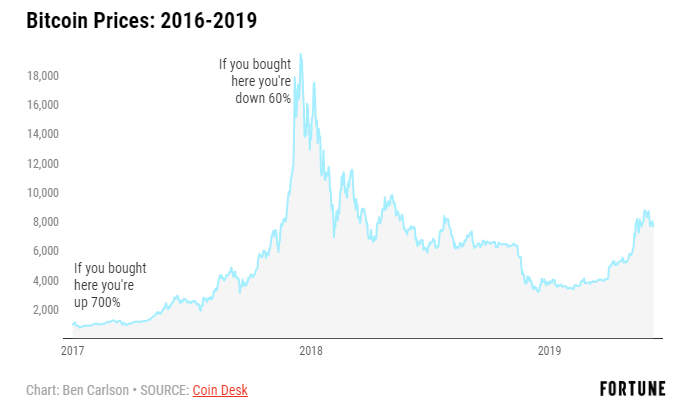 I could continue but you get the point. There will always be ammunition for both sides of the bull and bear debate in almost every security or market imaginable for the simple fact that markets are cyclical. That means you can win any argument about the markets by simply changing your start or end dates to suit your stance.

There are, however, some lessons investors can glean from these wild swings in price:

It can be fun to play these games where you cite performance from the absolute peak or trough in price but the truth is no one is good enough to always buy at market bottoms just like no one is bad enough to always buy at market tops. As investor and philanthropist Bernard Baruch once observed, “Don’t try to buy at the bottom and sell at the top. This can’t be done—except by liars.”

Most of the time markets are somewhere in the middle, not approaching a generational top or bottom. And it’s important to remember that market tops and bottoms always look much easier to call with the benefit of hindsight.

Short-term market moves are a function of emotion and trends rather than fundamentals so trying forecast the markets in the short-term is really a function of guessing the direction of human emotions. I can’t predict my own mood tomorrow morning, let alone the collective mood of millions of market participants.

Diversify your buys and sells

It’s often said that diversification is the one free lunch in finance but this idea extends beyond your mix of asset classes and investment strategies. One way to avoid the temptation to predict market highs and lows is to diversify across time in the markets by dollar cost averaging your purchases and sales periodically into and out of your investments. 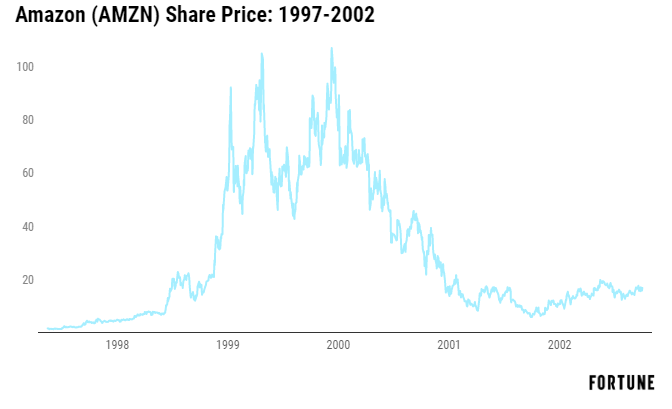 After rising nearly 100-fold during the dot-com bubble, Amazon shares came back to earth with a thud, falling almost 95% from their highs by the time the washout was over. Even if you had the good fortune of buying the stock around its IPO price, human nature dictates you would have sold after seeing your stock price fall 80%, and then get chopped in half and more from there.

Even at the lows following the dot-com flameout that still would have been good for a two-bagger, growing your money to around $30,000. But even then, most investors would have sold out well before the bottom.

It’s fun to play the IPO lottery game in your head but it does investors no good to constantly dream about finding that winning ticket. Chances are even if you picked the right numbers, you wouldn’t be able to stick with them over the long haul to collect your winnings.

Using precise price points with specific start and end dates are a wonderful way to make a point when discussing markets. But no one actually makes all of their buys and sells by top-ticking or bottom-fishing in the markets.

1It’s crazy to think the price of bitcoin has risen another 40%+ since this piece ran.