I’m not a huge fan of the Federal Reserve’s current policy choices.

They obviously had to do something about the persistently high inflation but I think they run the risk of overdoing it. The magnitude of their interest rate hikes increases the risk of something breaking in the financial system.

The Fed is in a tough spot because they acted too late but also because they don’t want inflation to get so bad that it causes them to bring the hammer down even harder in the future.

One of the biggest reasons the Fed is going so hard in the paint here is because they don’t want a repeat of the 1970s where inflation remained persistently high for the entire decade.

Jerome Powell said as much to the House Financial Services Committee when he commented that the 1970s situation is, “What we’re trying not to replicate.”

Treasury Secretary Janet Yellen said something similar: “I came of age and studied economics in the 1970s and I remember what that terrible period was like. No one wants to see that happen again.”

From 1970-1981, the average inflation rate in the United States was nearly 8% per year. In that period there were four recessions, with the final downturn providing the death blow to the inflationary beast.

I don’t agree with the idea that we are setting up for a repeat of the 1970s but there are some similarities.

Both periods saw loads of government spending and an increase in the money supply. Both periods experienced food and energy shortages. And both periods came with rapid wage growth.

The wage growth is probably the thing the Fed is most worried about. After all, one person’s income is another person’s spending.

If we compare the change in average hourly earnings to total inflation by decade you can see there is a strong relationship between wages and prices:

Through the end of September, average wages are up almost 17% in this decade already. That’s almost as much as the entire 2010s in less than 3 years. CPI is up just shy of 16% in the 2020s so the relationship appears to be holding.

So it’s not like the Fed’s fears are completely unfounded.

However, there are many differences as well.

The simplest reason I believe we won’t have a repeat of the 1970s inflationary spiral is because Fed officials have studied that period and the mistakes made by their predecessors.

Just like the reason there wasn’t a replay of the Great Depression from the 2008 crisis is because Fed officials had studied that period and the mistakes made by their predecessors.

Our knowledge of the 1970s and the scars that it left will be one of the biggest reasons we won’t have a replay of that outcome.

In the 1960s, economists that worked for Presidents Kennedy and Johnson introduced an approach they called “fine-tuning.” An economist who served on the Council of Economic Advisors  for Johnson wrote, “Recessions are now considered to be fundamentally preventable, like airplane crashes and unlike hurricanes.”

This could be why they underestimated the impact of war-time spending in Vietnam and the Great Society spending programs (Medicare, Medicaid, education, etc.) on the inflation rate, which went from less than 2% in 1960 to more than 6% by the end of the decade.

Most policymakers and politicians were opposed to raising interest rates to a level that would slow inflation. President Johnson himself once said, “It’s hard for a boy from Texas ever to see high interest rates as a lesser evil than anything else.”

When his Federal Reserve Chairman, William McChesney Martin, wanted to take the punch bowl away in 1965, Lyndon Johnson forcefully proclaimed, “Boys are dying in Vietnam, and Bill Martin doesn’t care!”

The message was received loud and clear. The Fed raised rates a little bit but then brought them back down a few years later.

Arthur Burns ran the Federal Reserve from 1970-1978, a period in which the inflation rate averaged nearly 7% per year and got as high as 12.3%. Burns assumed the Fed could do little to slow inflation by raising rates since they couldn’t control the actions of big corporations or trade unions.

So he persuaded Richard Nixon to set wage and price controls in the early-1970s.

Nixon was constantly pressuring Burns to keep interest rates low despite ever-rising inflation and no one wanted to be blamed for causing a recession.

When Gerald Ford took over as president he did make inflation a point of emphasis but telling Americans they should plant vegetable gardens, wear sweaters to save on energy costs and carpool to work didn’t do the trick.

When Jimmy Carter took over as president in 1976, he wanted to fight inflation with economic growth, saying, “My own belief is that the best way to control inflation is not to make money scarce.”

Once he realized inflation wasn’t going away towards the end of his first and only term in office, Carter basically told the American people they should stop buying so much stuff.

Good luck with that.

It wasn’t until Paul Volcker took over as Fed Chair in 1979 that someone decided enough was enough. He promptly raised the Fed Funds Rate from 10% to more than 20%, causing two recessions in three years and sending the unemployment rate to double-digits.

Interestingly enough, the current regime in the Fed has gone through a similar cycle, except it happened in two years, not 20 years.

Following the pandemic, Jerome Powell and company decided getting people back to work was their number one priority. And it worked: 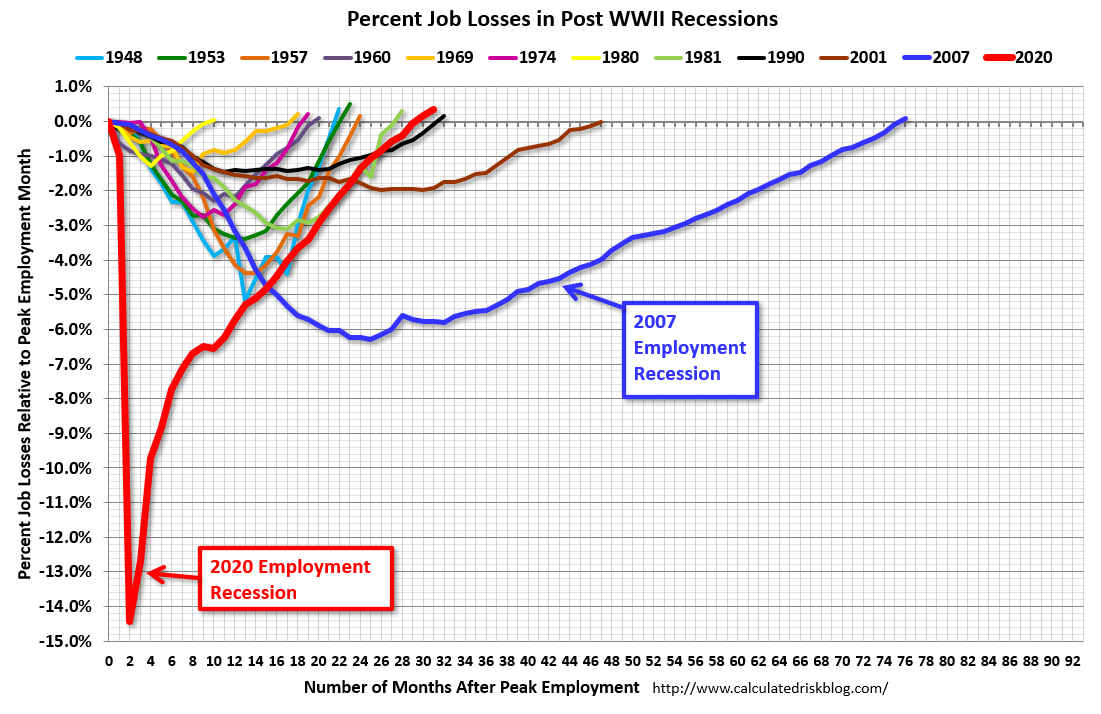 Now the Fed has shifted its focus from the labor market to inflation. It hasn’t worked just yet but these things tend to work on a lag.

Just look at how quickly the growth in money supply has crashed following the enormous spike from the pandemic-induced spending: 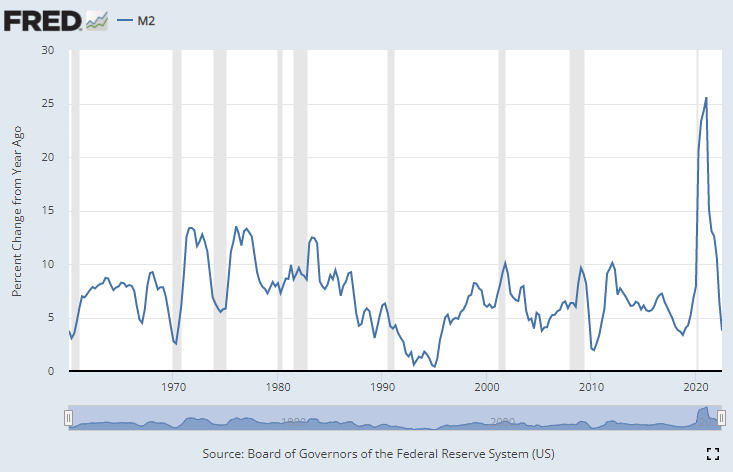 It took some time for that initial money supply increase to turn into inflation so it will probably take a little time to see the reversal happen as well.

Although we have seen oil prices rise in recent years, it’s nowhere close to the change people had to deal with in the 1970s:

I guess anything is possible but that seems unreasonable. In the 1970s, you had the end of Bretton Woods where Nixon suspended the convertibility of dollars into gold. There was the oil price embargo in 1973 and the Iranian revolution in 1979.

Today we do have the war in Ukraine but we also have OPEC and the U.S. shale industry. There are no lines at the gas station like there were in the 70s.

Energy was also a far greater proportion of household budgets in the 1970s than it is today: 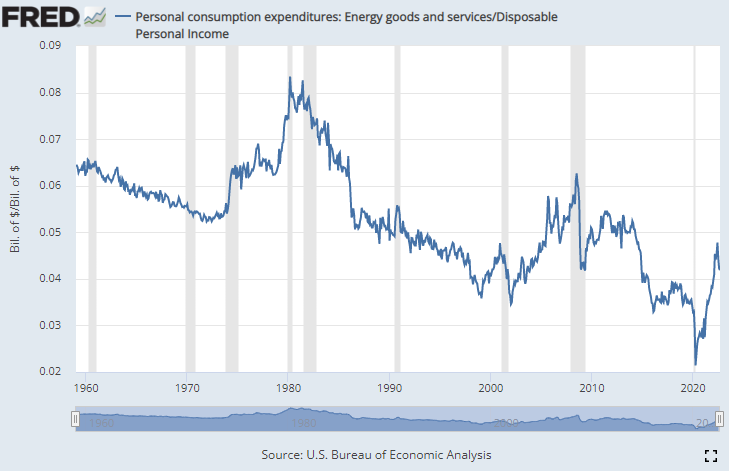 There are other long-term structural forces at play here as well that make it unlikely that we’ll see a repeat of 1970s-like inflation.

Technology is a deflationary force and that sector now makes up a far greater piece of the economic pie than it did back then.

Many people are worried about globalization following all of the supply chain problems from the pandemic, but it’s not like we’re going back to the way things were in the 70s.

Plus, you have aging demographics around the developed world.

Yes, the biggest demographic in the United States — millennials — are in their prime household formation years just like the boomers were in the 1970s.

But when the first wave of baby boomers were entering their prime working and spending years there was no other generation there to offset that spending. Boomers dwarfed every other demographic.

We’ve never had an aging demographic as large as the baby boomers. That should help offset millennials reaching their prime consumption years. There is a countervailing force to the millennials that didn’t exist in the 1970s for the boomers.

Inflation could obviously stay stubbornly high in the short-to-intermediate-term but I don’t see a repeat of the 1970s coming to the 2020s.

The Fed is already so much further ahead of this problem than they were back then.

We learned our lesson from that awful period of stagflation.

And there are long-term trends in place that should keep a lid on inflation over the long haul.

Further Reading:
What Would You Do If You Were Running the Fed Right Now?

1I’m usually not a log scale chart guy but it clearly shows the massive relative move in 1970s oil prices.