Don’t fight the Fed used to be a positive slogan.

That’s not the case anymore.

If anything, it feels like the Fed wants to fight us, all of us, including the stock market and the economy.

The Fed is actively trying to crash the stock market, break the housing market and push the economy into a recession.

How do I know this?

Because Fed officials are literally telling us this every time they speak.

We’re never going to say that are too many people working, but the real point is this, inflation, what we hear from people when we meet with them is that they really are suffering from inflation. And if we want to set ourselves up really light the way to another period of a very strong labor market, we have got to get inflation behind us. I wish there were a painless way to do that, there isn’t.

When asked how long Americans should be prepared to experience economic pain, Powell said he wants wages to fall:

How long? I mean it really depends on how long it takes for wages and more than that, prices, to come down for inflation to come down. And so what you see in our projections today is that inflation moves down significantly over the course of next year and then more the next year after that. And I think once you’re on that path, that’s a good thing, and things will start to feel better to people, they’ll feel lower inflation, they’ll feel the economy is improving, and also, if our projections are close to right, you’ll see that the costs in unemployment are, they’re meaningful, and they’re certainly very meaningful to the people who lose their jobs, and we talk about that in our meetings quite a lot.

And will this pain lead to a recession? Powell says he doesn’t know:

We have always understood that restoring price stability while achieving a relatively modest decline, or rather increase, in unemployment and a soft landing would be very challenging and we don’t know, no one knows whether this process will lead to a recession or if so, how significant that recession would be.

Please allow me to translate each of these statements:

In some ways, I understand why the Fed is so hell-bent on slowing rising prices. People REALLY don’t like sky-high inflation.

But in other ways, I think what the Fed is doing is INSANE.

What are they doing?!

The pandemic seriously messed up the economy and markets in a multitude of ways. The Fed was responsible for some of those problems but there were also extenuating circumstances.

They don’t dictate how the different waves of Covid will impact the global economy. They don’t control government spending. The Fed can’t produce more cars. They can’t fix supply chains. They cannot control the actions of a madman in Russia who continues to fight a cruel war against an innocent nation.

I appreciate how the Fed must feel somewhat responsible for the highest inflation reading in 40 some odd years because they kept rates at 0% for a long time and gobbled up bonds like people at Costco eating free samples.

The Fed was behind the eightball in terms of seeing this inflation coming. It was supposed to be transitory and it wasn’t.

But the Fed has already moved ridiculously fast with their tightening.

Kathy Jones from Charles Schwab looked at the change in Fed Funds Rate during the last 40 years or so of tightening cycles:

It took them a while to get going but once they realized inflation was an actual problem they’ve now overcorrected and raised rates at a faster clip than just about every Federal Reserve in history.

They want the stock market to go down. They want people to lose their jobs and make less money. They will take the economy down if they have to so prices will stop rising.

The Fed is more or less telling us they are willing to raise interest rates high enough to crush the economy.

Should we believe them?

For now I guess.

I think Fed officials are so embarrassed they missed inflation getting this high that they’re willing to overcorrect to the other side and force us into a recession to prove a point.

On the other hand, the Fed’s forecasting ability leaves a lot to be desired.

In September 2020 the Fed predicted it would take until 2023 for the unemployment rate to get to 4%. That seemed reasonable at the time considering how long it’s taken for jobs to come back during previous recoveries.

Instead, the unemployment rate was already under 4% by December 2021, years ahead of schedule: 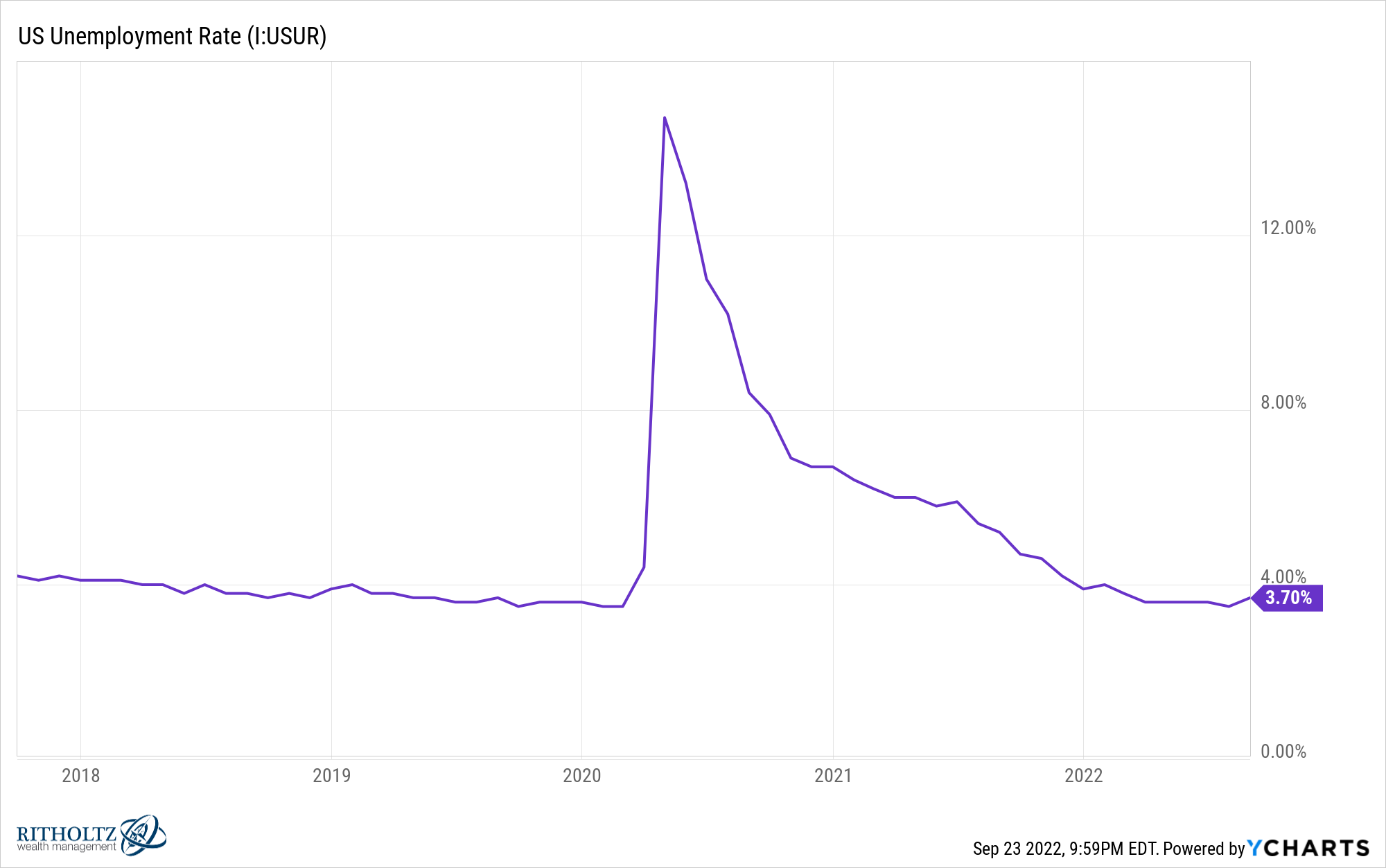 Ok fine, we had the fastest jobs recovery in history from a double-digit unemployment rate. Let’s give them a mulligan for that one. It was easy to be pessimistic in 2020 before the vaccine was here.

But how did the Fed do with their predictions once it became apparent the economic recovery was already underway?

The Fed provided a similar forecast in June of 2021 when it was clear markets and the economy were already recovering:

I’ve highlighted here the Fed’s forecast for short-term interest rates here. They were figuring 0% through the end of 2022 with a 50 basis point hike in 2023.

Obviously, the Fed did not assume we would see inflation rise to 9% this year (neither did I).

But the Fed Funds Rate is now at 3.25%. They have raised rates 75 basis points at the last two meetings. Those two rate hikes are higher than the forecast for rates to rise for the entirety of 2023!

I’m not going to fault anyone for being just a bit outside on their forecast of the economy since the start of the pandemic.

This is clearly one of the most difficult economic environments we’ve ever experienced. There are no historical precedents for what we’ve lived through.

It feels like we’ve been through 7 economic cycles in the past 3 years.

My problem with the Fed is they don’t seem to have the humility to admit how difficult of an environment we find ourselves in.

Why not give it some time to see how things shake out from here?

Why don’t we let the economy breath for a hot minute before trying to get people fired from their job?

I’m not worried about the stock market or the bond market. It’s no fun to deal with losses but losses are part of the deal with risk assets.

It’s much easier to recover from a bear market than a job loss. Just think of the millions of people who lost their jobs in 2020 from the pandemic. We really want to put people through that again so soon?

I realize recessions are a feature of this system in which we operate. Downturns are impossible to avoid.

But why would we choose to create one if we can help it?

Why not allow people to see their wages rise for a little longer and have a little patience to see if the pandemic-related inflation stuff will subside on its own?

There are two types of risks when it comes to financial markets — (1) avoidable and (2) unavoidable.

If the Fed sends us into a recession that seems like an avoidable risk to me.

I don’t understand what Jerome Powell and company are doing right now.

The good news is the Fed is constantly changing its mind because they’re just as bad at predicting the future as everyone else.

Hopefully they come to their senses before they break something.

Further Reading:
How to Prepare For a Recession