No two market environments are ever the same but there are certainly similarities across time.

For instance, the post-Corona Crash period in 2020 that seeped into the first couple months of 2021 shared plenty of characteristics with the late-1990s dot-com bubble:

As with every cycle, nothing lasts forever. And as luck would have it, the aftermath of these paradigm shifts look eerily similar.

And this is not to mention the geopolitical events that may have altered history forever (9/11 and the war in Ukraine).

Obviously, there are plenty of differences too.

There was no supply shortage or pandemic or streaming services or social media or iPhones or a bunch of other stuff back in the early-2000s.

These comparisons are never perfect. 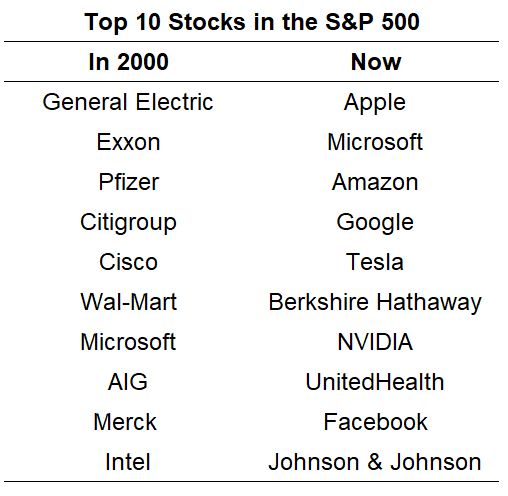 Sure there was Microsoft (the only name that shows up on both lists), Intel and Cisco back then. But Apple, Microsoft, Amazon, Google, NVIDIA and Facebook alone make up nearly one-quarter of the S&P 500 today.

The Nasdaq 100 ETF has close to $180 billion in assets under management. The Nasdaq is down 20% right now and it’s estimated that some $5 trillion in wealth has been vaporized during this sell-off.

The Nasdaq fell more than 80% following the dot-com bubble over the course of a few years and that was estimated to have wiped out $5 trillion as well.

There is so much more money tied up in tech stocks now than there was at the turn of the century, whether that’s tech-centric funds, individual holdings or index funds.

There are only three sectors with worse performance than the index — communications (a tech-heavy sector comprised of Facebook, Google, Netflix and more), consumer discretionary (Amazon is the biggest holding) and tech: 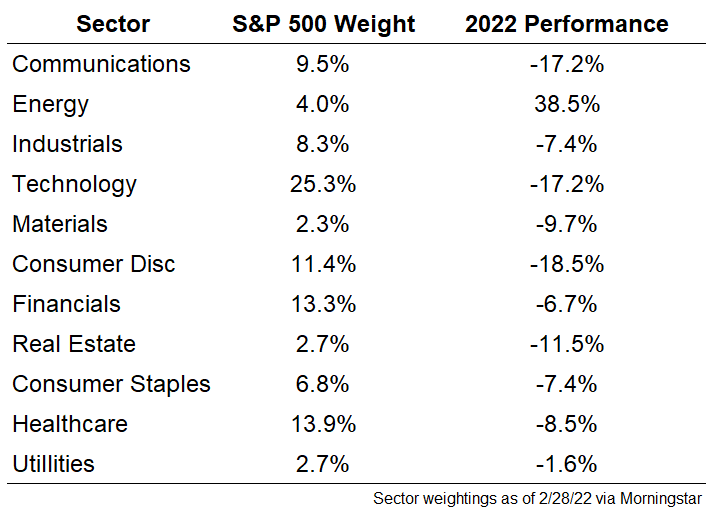 Energy is the lone sector with positive returns this year yet it only makes up 4% of the index.

But I’m sure all of the more tech-heavy investors are now wondering what it will take for tech stocks to return to the throne.

Obviously, it could be a while. Tech has outperformed really since the end of the Great Financial Crisis.

A situation with prolonged above-average inflation could keep this pain trade on for growth investors. Higher inflation, higher (nominal) economic growth and higher interest rates is the type of environment that tends to favor value stocks.

Yet should this scenario continue, the other side of it is probably what tech stocks need to get their mojo back.

Let’s say inflation does remain stubbornly high. This could cause consumers to rein in their spending (unlikely but you never know) or cause the Fed to throw us into a recession to get prices under control (a higher likelihood).

Rates would have to move up, which would cause growth to slow, which would slow inflation and potentially send us into a recession.

In a recession, interest rates fall to compensate for slower economic growth.

This would put us back into a situation with lower inflation, lower rates and lower growth. This sounds like a much more ideal environment for tech stocks to thrive.

Tech stocks don’t necessarily require these conditions to do well but if investors assume they matter then they do, at least for the time being.

Listen, I don’t know when we’re going into a recession. It could start this year or it could start five years from now.

There are far too many moving parts to predict something like that right now.

And if we do see a slowdown in economic growth it’s highly likely most stocks will continue to fall, even the ones that have already crashed, like the hyper-growth tech names.

But I do think there is a reasonable case to be made that the current environment which is so toxic to tech stocks could become the saving grace for this sector.

One of the biggest reasons so many growth stocks are crashing over the past year is because things got out of hand and investors took things too far.

Ironically, the same thing could happen with inflation. If it goes too far and pushes us into a recession, that could actually be a good thing long-term for tech stocks.

Recessions provide something of a reset in the markets where the winners going into them are rarely the winners coming out of them.

The Corona Crash and ensuing government spending turned out to be a positive for value stocks and a negative for growth stocks.

A recession in the future that slows inflation could have the opposite effect.