As of the close this past Friday these were the drawdowns in some of the biggest technology stocks: 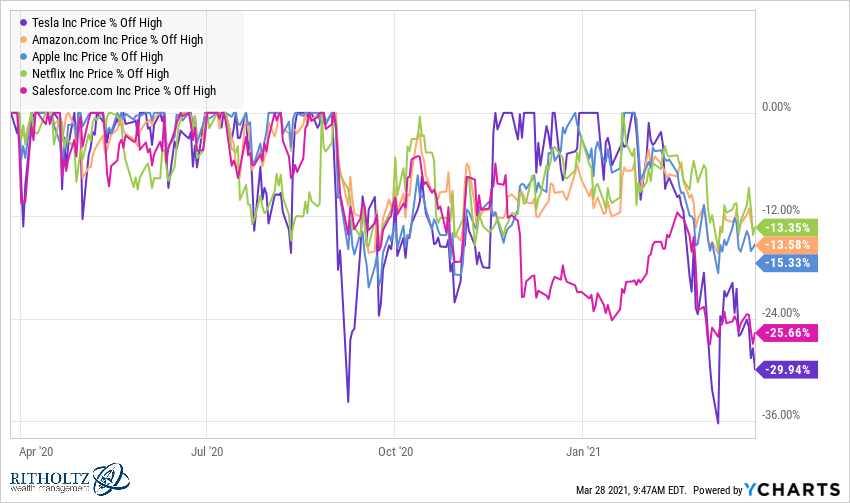 These stocks collectively make up roughly 13% of the S&P 500 (and that number was a tad higher before this sell-off).

Remember this chart from Goldman Sachs from late last summer? 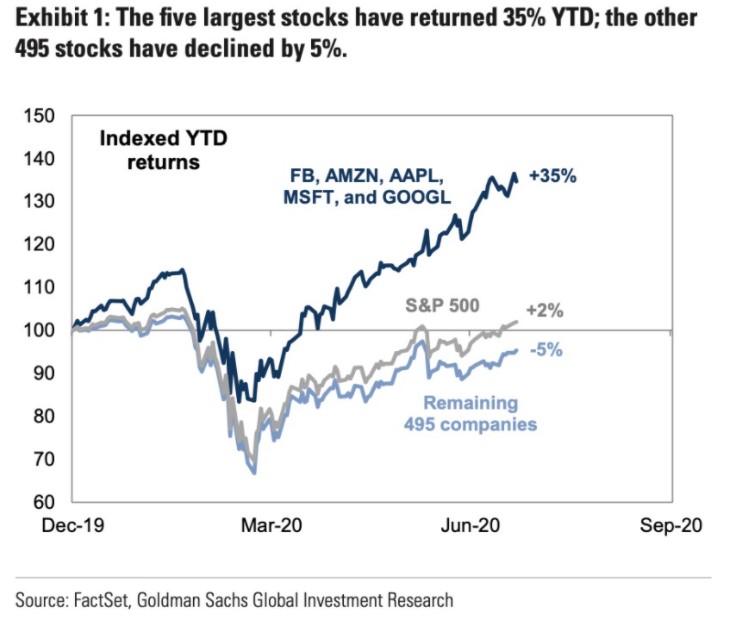 The chart was a tad misleading but there was something to the fact that tech stocks were ruling the day going into and coming out of the Corona crash.

Micro caps, small caps, mid caps, value, energy and financials (to name a few) have all taken the baton from big tech since the end of last summer: 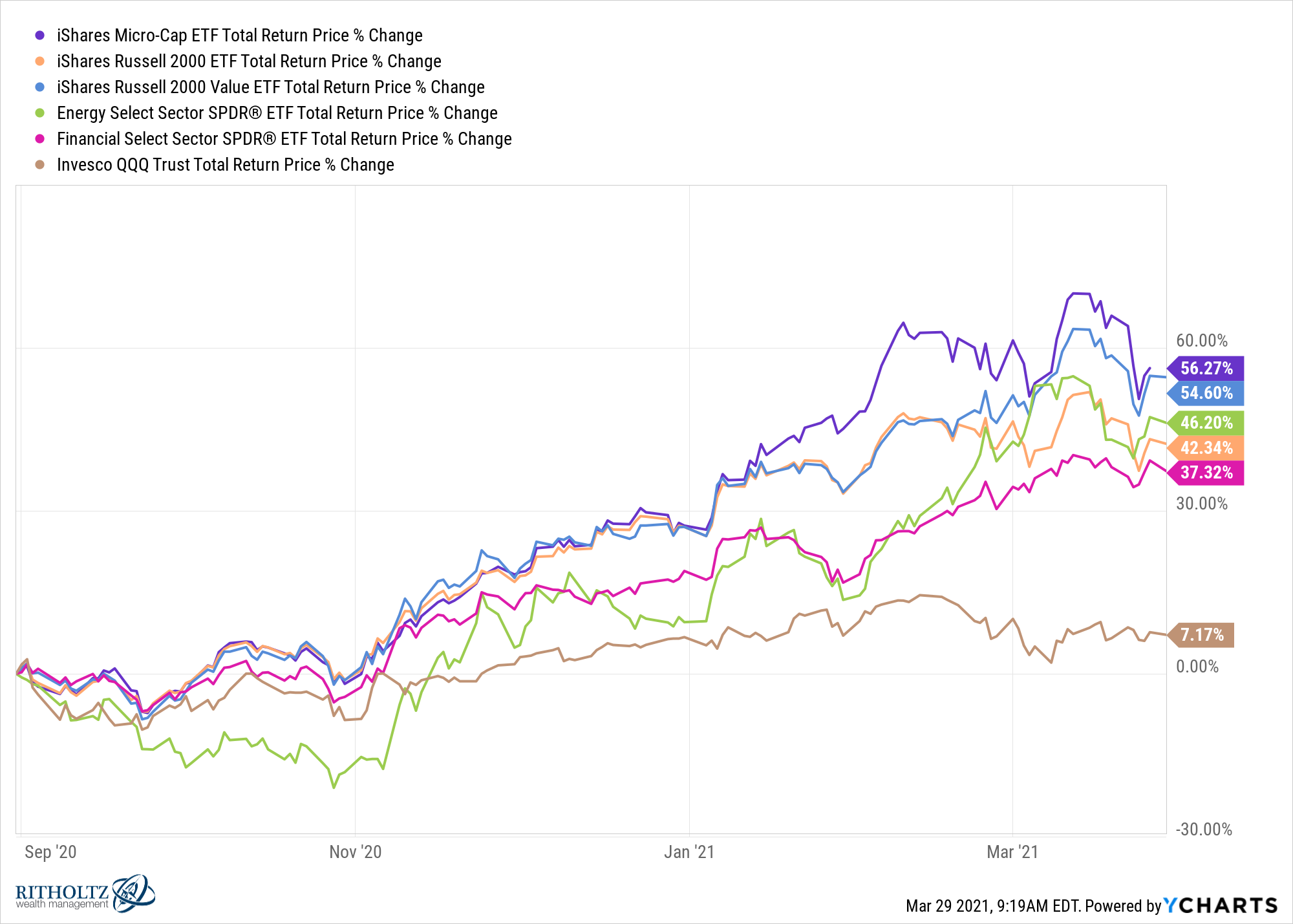 So why is this happening now? Why are these once-forgotten areas of the market finally outperforming?

There are a number of reasons you could point to — mean reversion, fiscal stimulus, rising rates, an economic recovery, etc. But all of these were effects of a greater cause — the pandemic recession.

People have been looking for a catalyst for years now for other parts of the market to finally displace tech stocks.

You could make the case that nasty recessions are almost always a catalyst for the change in market leadership.

In the late-1960s and early-1970s, the Go-Go Years saw large growth and blue-chip stocks take center stage. These were one-decision stocks and that decision was to buy.

Investor risk appetite completely changed coming out of the recession and market crash.

Back in April I looked at what happens to small cap value stocks coming out of a bear market: 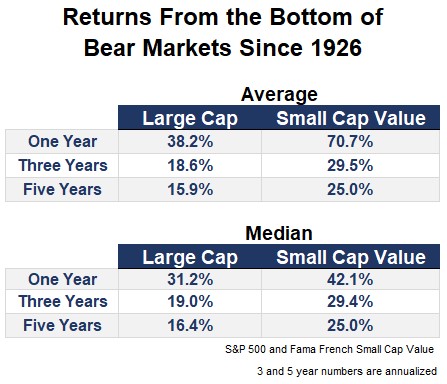 So that 1970s situation makes sense.

But why do we see such a shift coming out of a crash?

There are a few reasons.

It’s like playing video games as a kid and you start losing so you hit the reset button. The same thing applies in the stock market. There is something to the idea that a reset in the markets allows investors to take stock of what they own and start anew in terms of their holdings and allocations. It’s easier to reposition when markets are down because it feels like everyone is on a level playing field again.

This happens time and again coming out of recessions of the past. 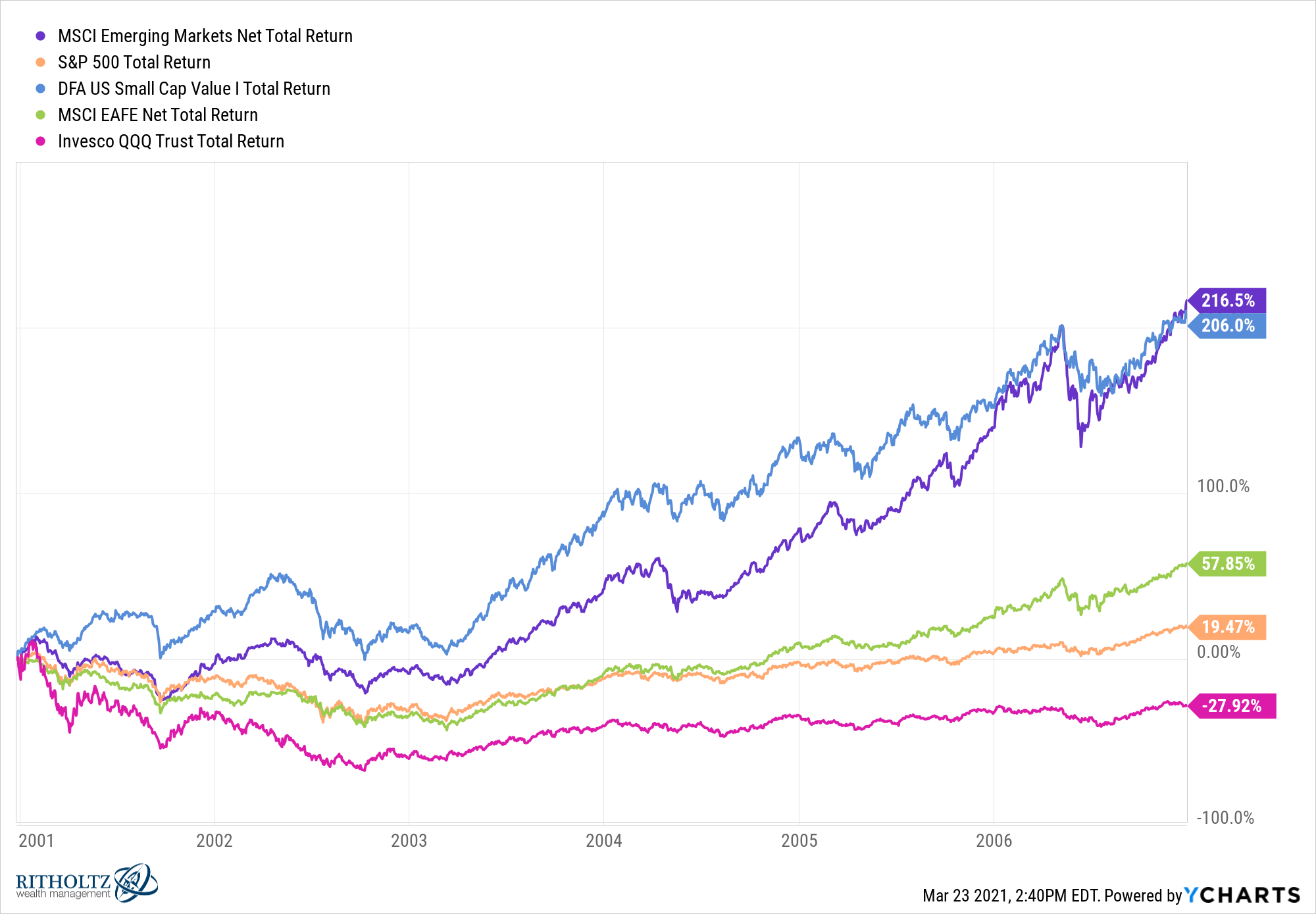 This was a wonderful case of mean reversion and a wake-up call for those investors who weren’t diversified enough.

It’s also true that monetary and fiscal policy plays a large role in anointing the winners, perhaps more than ever these days.

After small caps, value and emerging markets ruled the day leading up to the financial crisis of 2008, this happened following the crash: 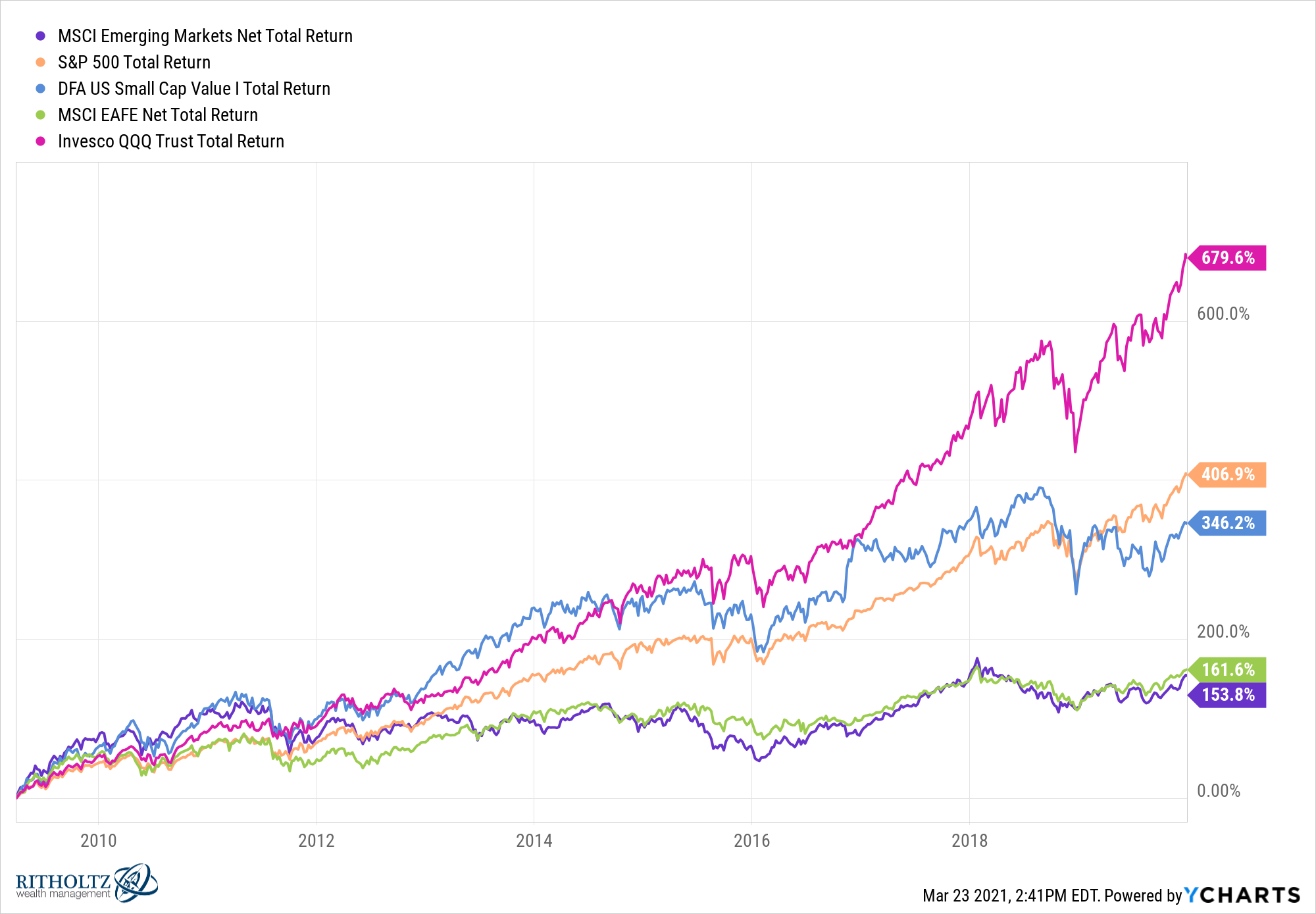 A combination of mean reversion from an awful decade of tech stock returns in the 2000s, low interest rates, little in the way of government spending and new and exciting innovation paved the way for tech stocks to once again rule the day.

Now look at the returns since last fall: 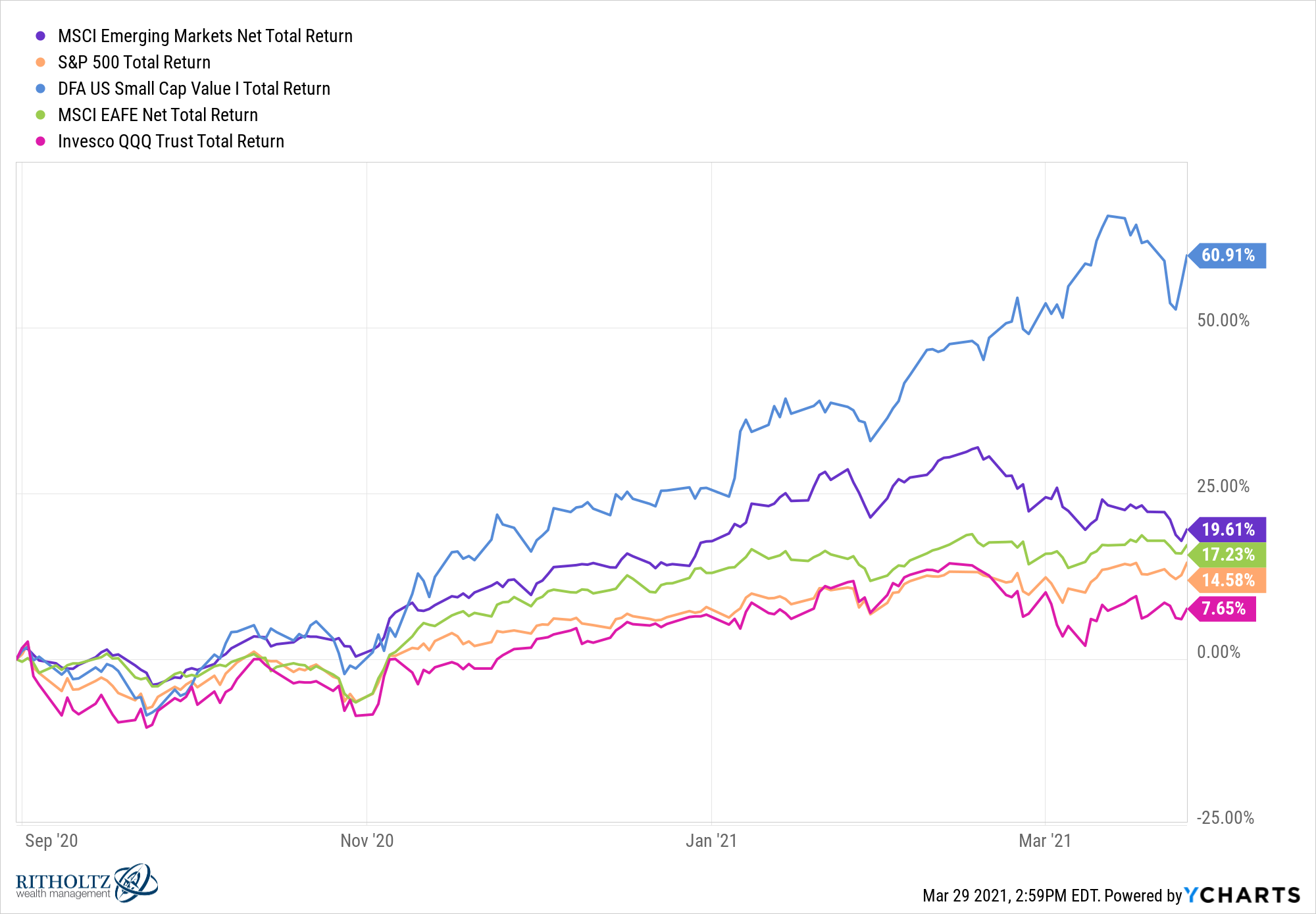 Granted, this is a short period of time.

There’s no guarantee this underperformance by the tech sector will last. Maybe the hated areas of the market will lag yet again. These things don’t have to be as cyclical as they were in the past. The dominance of technology companies could change this script.

But because of the recession that was brought about from the pandemic, the fiscal response we’ve seen, an increased risk of inflation and the possibility of higher economic growth, the probability of a sea change in stock market leadership is higher than it has been in some time.

The Nasdaq 100 has ruled the markets for a long time. Its reign — at least for this cycle — might be coming to an end.

Either way, the answer for most investors remains as simple as ever — diversification.

Diversification by market cap, strategy and geography takes away the need to constantly be in search of the next winner because you will already own it.