A reader sent me an old piece I wrote in early-2014 that contained a stat that made me do a double-take:

The energy sector outperformed the S&P 500 by nearly 7% per year with nearly the same standard deviation.

This seems almost impossible to believe at the moment. Oil prices went negative this year. Energy stocks are in a death spiral. Were they really the top dog as recently as 2014?

That piece was about the returns to various sectors in the S&P 500 so I went back and looked at the performance of the new king of the hill — tech stocks — in relation to energy names back then.

The State Street SPDR sector ETFs were released in January 1999. These are the total returns for energy, technology and the S&P 500 from that inception date through the end of 2013: 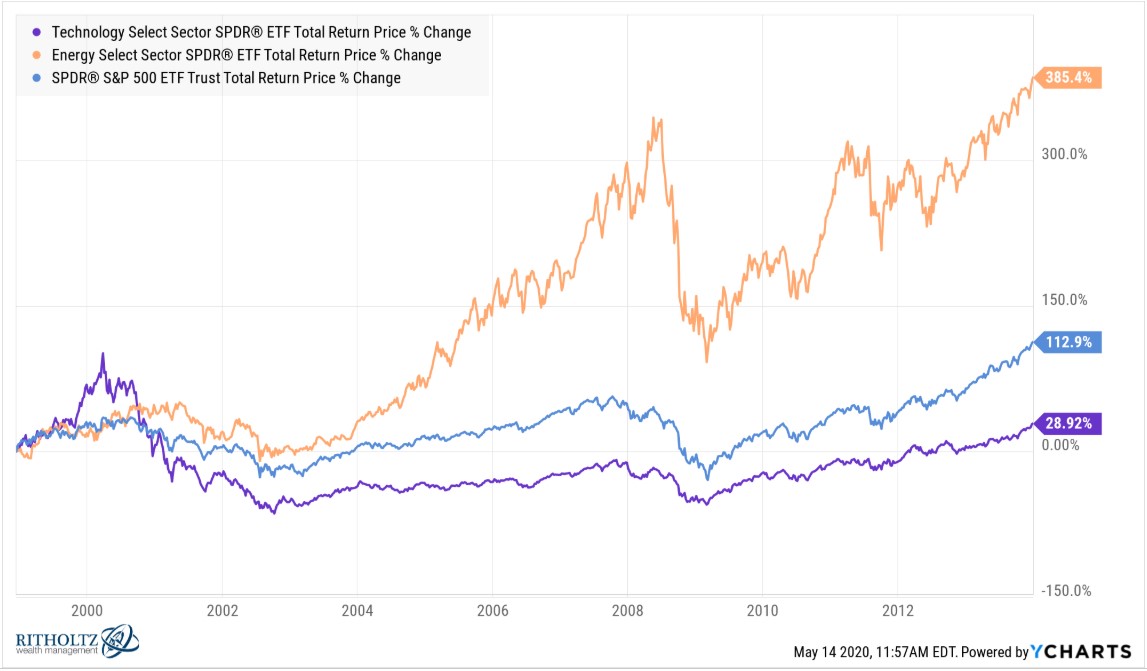 This may be a cherry-picked starting point because it coincides closely with the bursting of the dot-com bubble but the numbers are the numbers. For a 15-year period, energy stocks absolutely smoked technology stocks and the broader S&P 500 and it wasn’t even close. 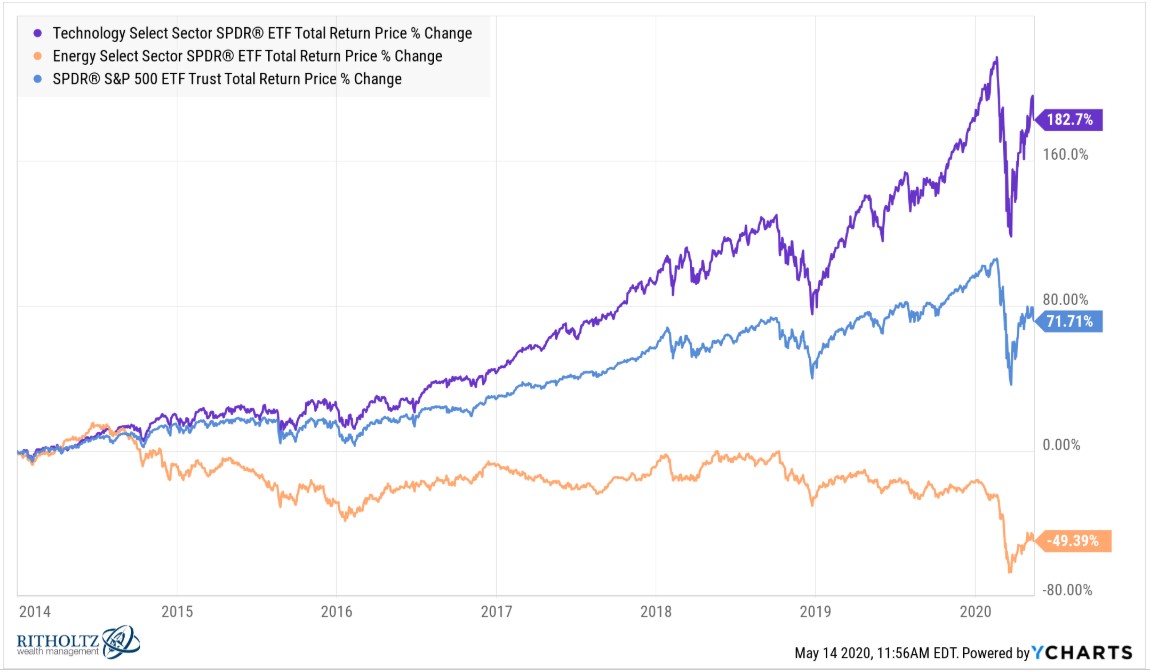 Everyone knows what happened since then. Oil crashed, tech stocks took off like a rocket ship and they haven’t looked back since.

And as great at the returns were for energy stocks from 1999-2013, the pullback ever since then has led to massive underperformance since inception: 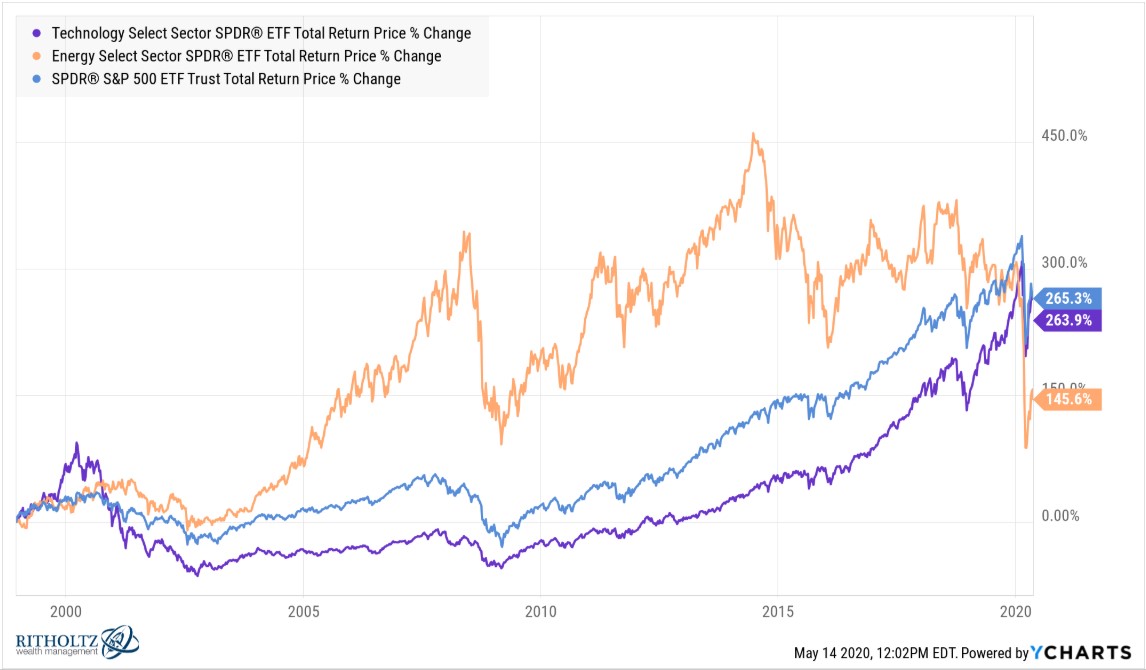 The tech stock resurgence has erased 15 years of underperformance with the S&P 500 so they’re now neck-and-neck.

Right now it feels like mega-caps tech stocks will hold the throne forever. They were not only gaining market share leading up to the crisis but have been some of the biggest beneficiaries of what’s transpired so far in this debacle.

If anything, these companies are now stronger than ever.

Would you bet against Amazon, Apple or Google right now?

Maybe these companies continue to gobble up the stock market but history is littered with examples of huge companies that go on to underperform the market once they create an outsized position.

Jim Bianco shared a great chart of the largest company in the S&P 500 by year going back to the 1960s: 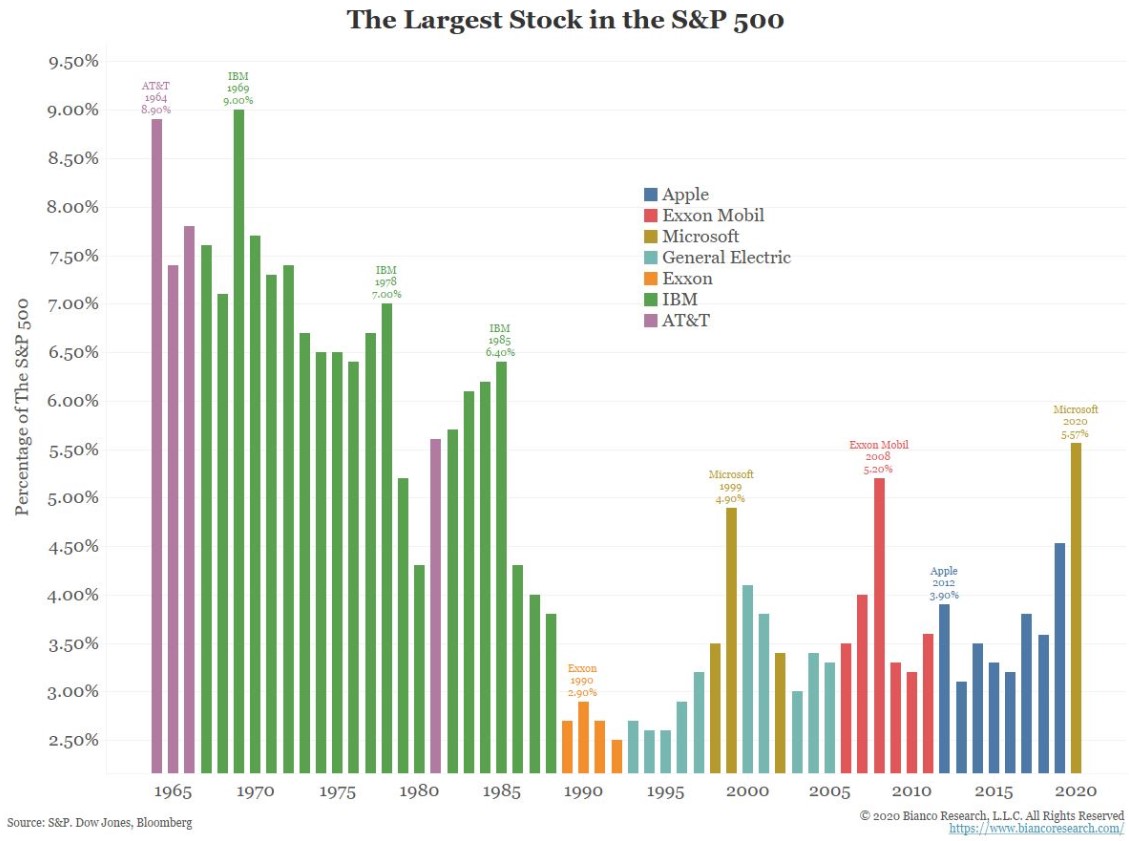 Most people probably didn’t realize the stock market was actually more concentrated in the past than it is today. AT&T and IBM were almost 10% of the index back in the 1960s.

You can see from the graph those two names were at the top for a long time in the 1960s and 1970s. In more recent decades the turnover among the biggest names has increased.

Take General Electric as an example. The massive conglomerate was the biggest company in the market for much of the 1990s and early-2000s. The last year it held the crown was 2005. Here are the returns for GE since then: 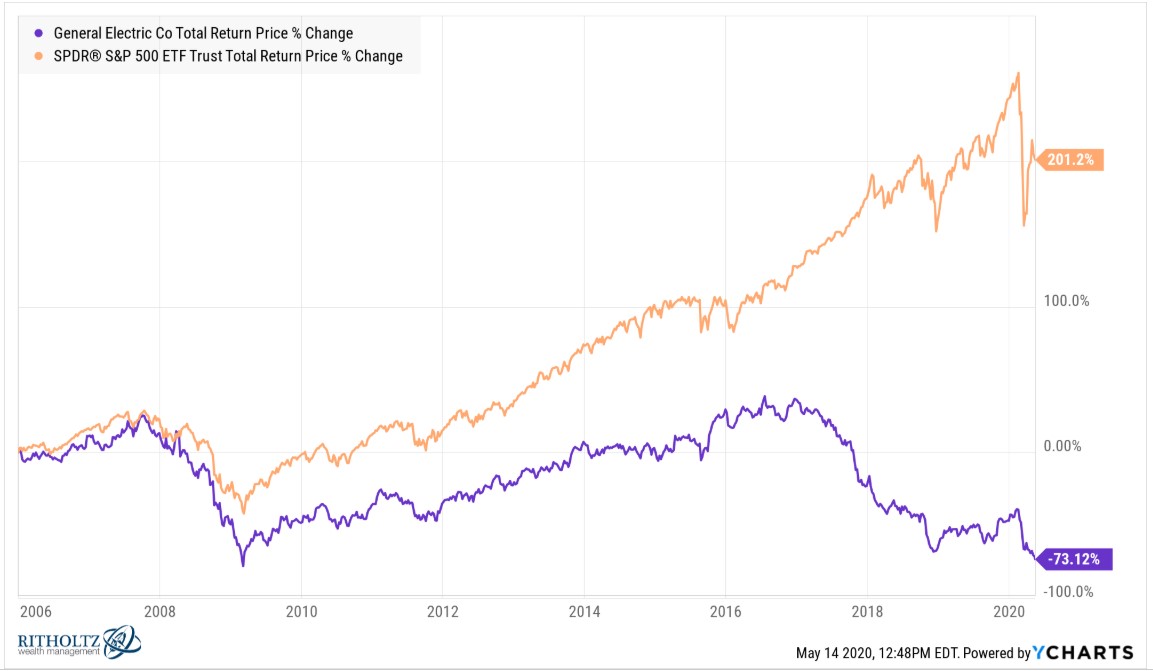 It’s painful to think about all of the retirement portfolios that have been ruined for employees of the company who held an outsized position in GE.

Exxon was the biggest stock in the market as recently as 2011. Here are the returns since then: 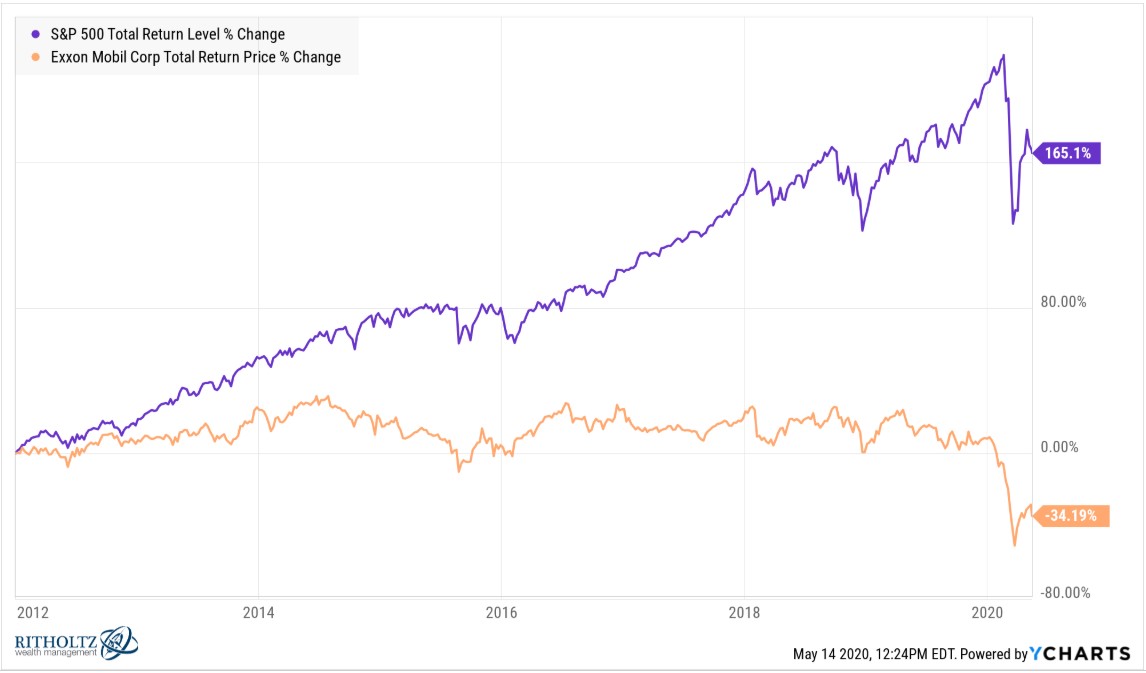 This is not surprising when you look at the returns of the energy sector as a whole.

IBM was the largest stock through 1989: 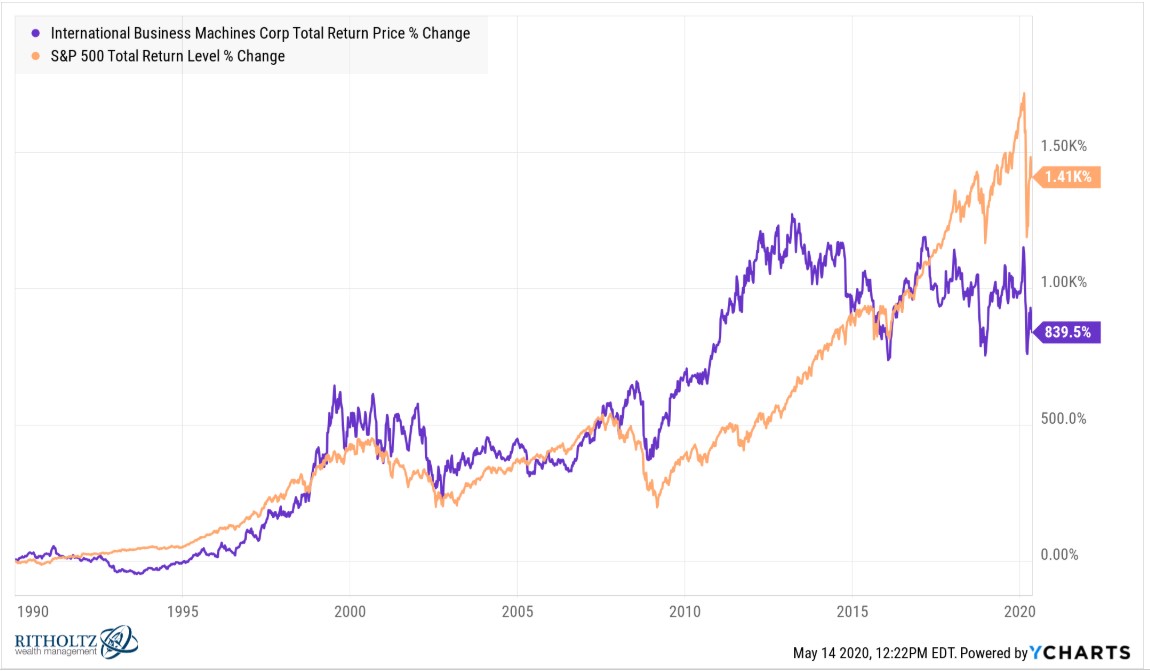 The company held up relatively well for a number of years but is now underperforming the S&P 500 by more than 200% since 1989.

Microsoft is one of the more resilient stocks on this list. It was the top name in 2002 and then again in 2020 but it wasn’t until the end of 2016 that it finally caught up to the performance of the index before making another impressive run at the top spot: 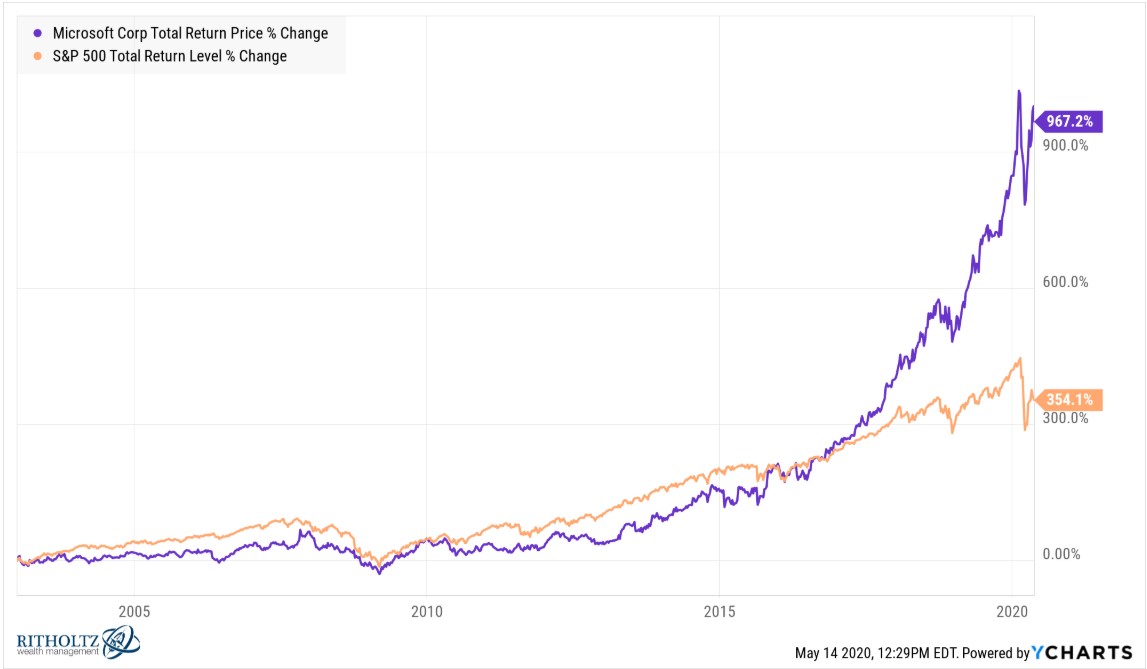 To be fair, I’m looking at the performance for these stocks from their peak. No one ever knows that in advance and many of these companies stayed at the top for a number of years.

But the history of the markets shows nothing lasts forever.

It would be foolish to predict the demise of tech companies at the moment. They are proving to be one of the few bright spots in an otherwise awful crisis. The performance of tech stocks actually makes sense right now.

But the stocks of these companies will overshoot at some point. Investors always take things too far by baking in expectations their investments can’t possibly hope to live up to when things are going well.

Tech stocks will come back to earth and be replaced by something else eventually. The hard part of this equation is knowing when that eventuality takes place.

Investors have been waiting years for the biggest stocks in the stock market to falter and they’ve done just the opposite.

I see only three choices when thinking through how this all plays out:

(1) Beat your head against the wall and avoid these companies (or short them) like many value investors have done in recent years.

(2) Concentrate your money in tech stocks and hope they continue to outperform.

(3) Own a broadly diversified universe of stocks such that you can somewhat take advantage of any further upside appreciation in tech stocks but not be hurt too badly if they stumble.

Further Reading:
The Collapse of the Energy Sector