“Rule number one: most things will prove to be cyclical. Rule number two: some of the greatest opportunities for gain and loss come when people forget rule number one.” – Howard Mark

Here’s a breakdown of the S&P 500 sector ETFs ranked from best to worst performance by year over the past decade along with the first four months of 2014 (click to enlarge):

Some observations on this data: 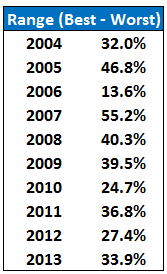 That’s an average difference of 35% between top and bottom performing sectors. Just pick the right sectors and you don’t really have to worry about stock picking (obviously easier said than done).

The takeaway here is that most active managers track too closely to benchmark sector weights, making it much harder for them to outperform the market.  To outperform you must be willing to make investments that are far different than the make-up of the benchmark you are trying to beat.

This is no easy task as career risk and the possibility of years of underperformance can be difficult to stomach, for both portfolio managers and investors.