There are two ways of looking at the following chart of short-term bond yields: 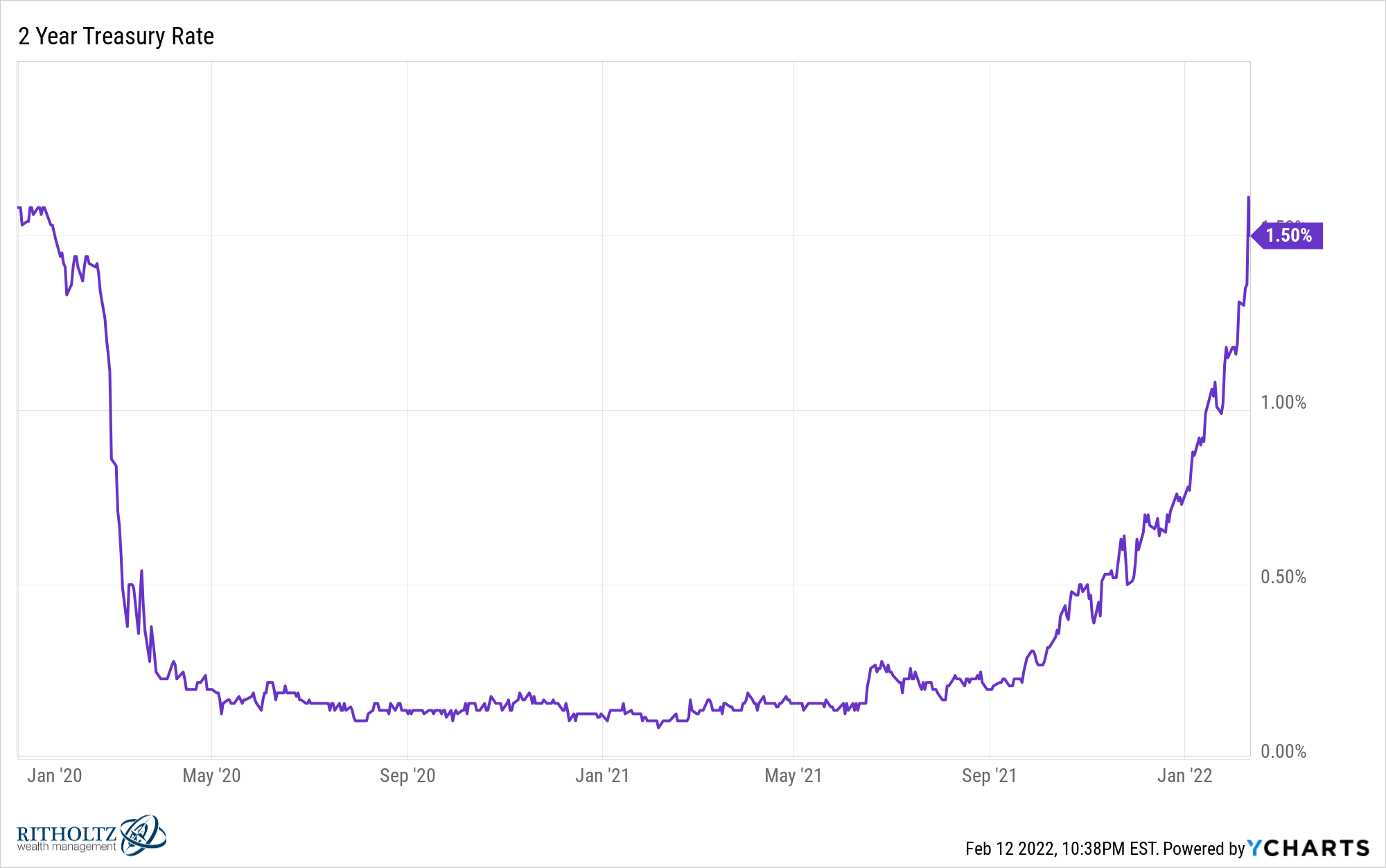 One way is this is an insane move of late in short-term government bond yields. The speed with which we’re seeing a repricing of bond yields based on inflation data and the potential for Fed rate hikes is breathtaking.

Just look at that smile pattern since the start of the pandemic.

Another way of looking at this chart is to consider that two year treasury yields ended the year in 2019 at 1.6%. After a flood of both fiscal and monetary stimulus because of the pandemic the two year treasury yield is once again around 1.6% despite much higher inflation than we saw by the end of 2019 (2.3% then vs. 7.5% now).

Two year treasury yields have increased to the current 1.5% level from a low of 0.09% (9 basis points in finance speak) in a matter of months.

Surely short-term treasuries have gotten crushed in this run-up in rates right?

How could they not get crushed when rates are up 17x over the past year or so?

Bond prices and bond yields have an inverse relationship so when yields rise prices fall and vice versa.

Here is the total return for the iShares 1-3 Year Treasury ETF (SHY) from the bottom in two year rates in early February of 2021: 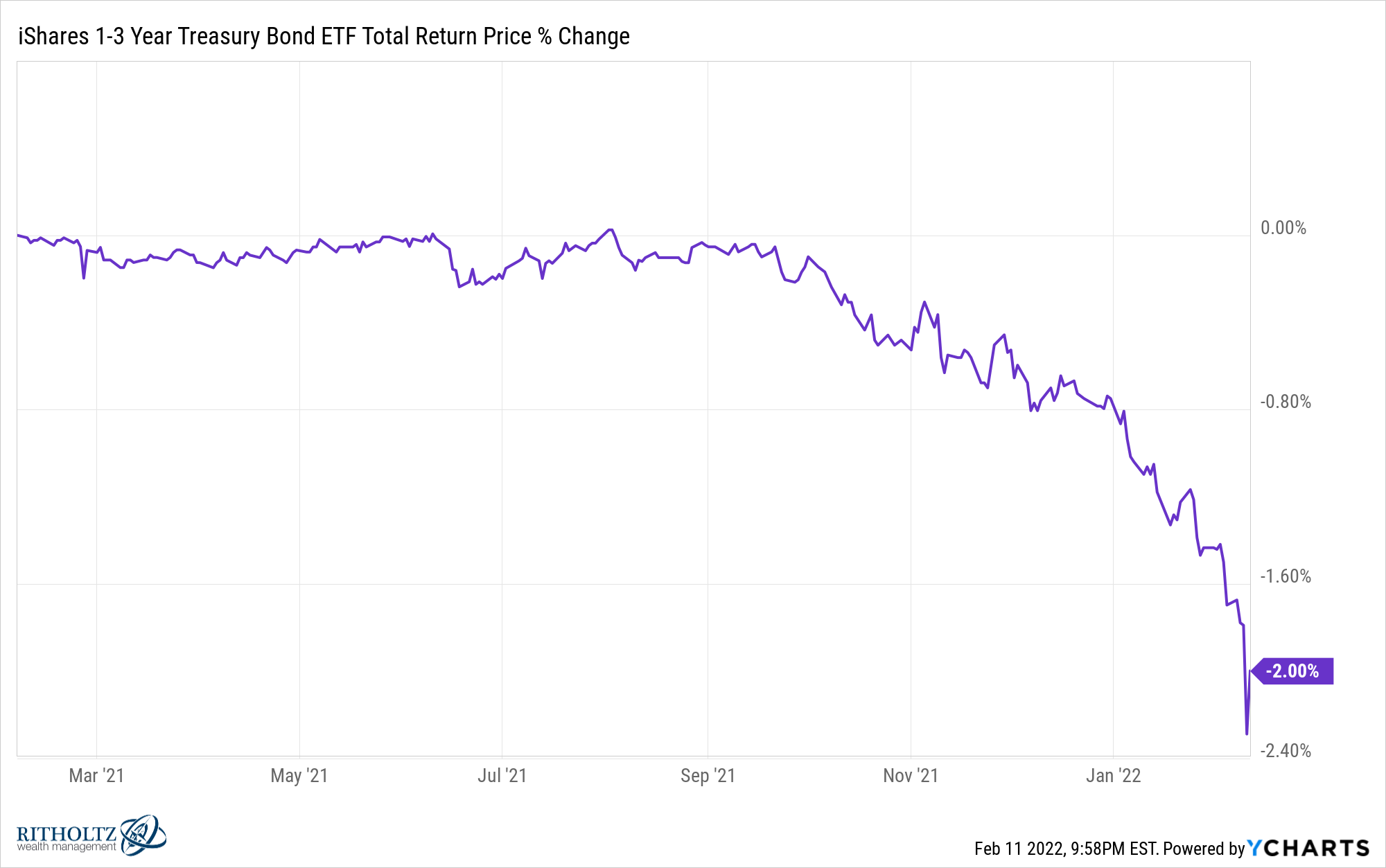 Wait a minute — this can’t be right. How is it possible for rates to rise 17x in a year but short-term bonds have only lost 2% of their value?1

Granted, it’s not fun to lose money when investing in short-term bonds but a 2% loss is a bad hour in the stock market. This is merely a flesh wound.

It’s important to remember that it’s not rising interest rates, per se, that is bad for bonds — it’s inflation. While SHY is down 2% on a nominal basis over the past year, it’s down nearly 10% after accounting for the 7.5% inflation rate.

Inflation is a much greater risk for bonds than rising rates.

Eventually those higher rates turn into higher yields for your bond holdings. But inflation eats away into the purchasing power of your fixed income payments over time.

The stock market does not perform quite as well when inflation is rising (also see here).

The stock market is still one of your best bets for hedging against inflation over the long run but a sustained run of higher prices can put a dent in stocks in the short-to-intermediate term, especially on a real basis.

Warren Buffett wrote about this back in the 1970s which is the last time the United States experienced above-average inflation for an extended period of time.

Buffett wrote How Inflation Swindles the Equity Investor in 1977.

That year the annual inflation rate was running at nearly 7%. The average inflation rate over the preceding 7 years was also close to 7%, going as high as 11% in 1974. Over the next four years it would average close to 11% per year.

Buffett’s main takeaway is that stocks are more similar to bonds than most investors assume, especially when it comes to investing during a highly inflationary environment:

The main reason, I believe, is that stocks, in economic substance, are really very similar to bonds.

I know that this belief will seem eccentric to many investors. They will immediately observe that the return on a bond (the coupon) is fixed, while the return on an equity investment (the company’s earnings) can vary substantially from one year to another. True enough. But anyone who examines the aggregate returns that have been earned by companies during the postwar years will discover something extraordinary: the returns on equity have in fact not varied much at all.

Buffett’s reasoning here was based on the idea that return on equity for U.S. corporations is relatively stable over time at around 12%. ROE measures how much profit corporations generate for every $1 of shareholder equity.

Obviously, the prices people are willing to pay for that ROE can vary quite violently at times, but the ROE itself is relatively sticky.

Using this framework you can think of stocks as something of a perpetual bond that never comes due.

If the ROE on stocks doesn’t change all that much, higher inflation would be harmful since investors would be receiving a lower share of profits after accounting for a higher cost of living.

Even if you agree that the 12% equity coupon is more or less immutable, you still may hope to do well with it in the years ahead. It’s conceivable that you will. After all, a lot of investors did well with it for a long time. But your future results will be governed by three variables: the relationship between book value and market value, the tax rate, and the inflation rate.

As a common stockholder you will have more dollars, but you may have no more purchasing power.

Unfortunately, this means high inflation can be bad for both stocks and bonds.

Interestingly enough, even on a nominal basis the year is off to a poor start for both stocks and bonds: 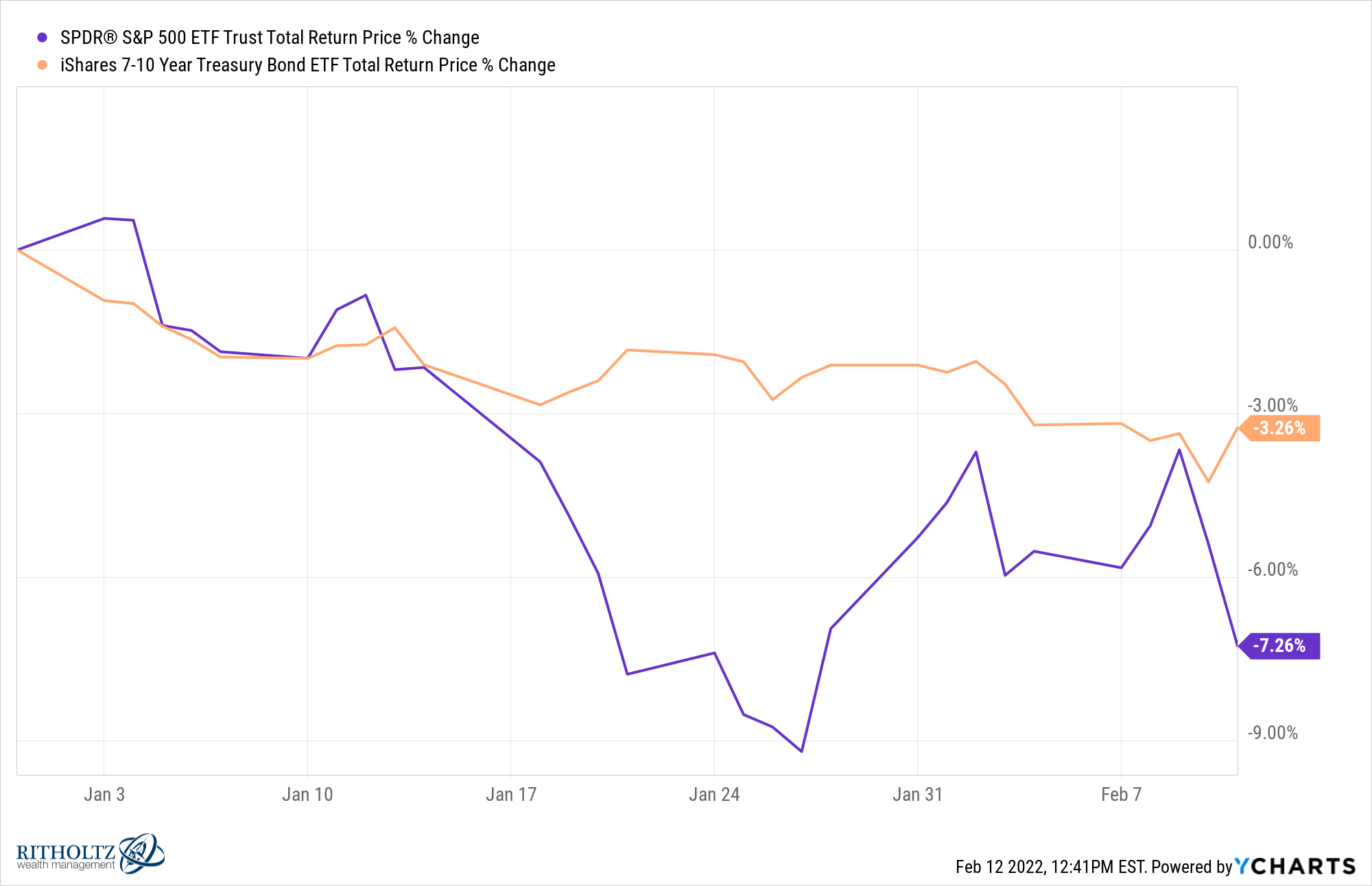 We’re only 6 weeks into the year so it’s a little premature to draw any concrete conclusions but if this were to hold it would be one of the few times both stocks and bonds have both finished the year in negative territory.

I could only find four instances over the past 90+ years of data where both stocks and bonds fell in the same year in U.S. markets: 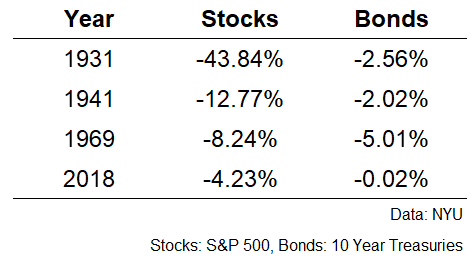 The weird economic state of affairs we find ourselves in this year with high inflation and rising rates from low levels is the perfect environment for this to happen.

Two of these four instances included years with above-average inflation (it was above 5% in both 1941 and 1969).

The questions investors have to ask themselves are the following:

Does it really matter?

Does the potential for an underwhelming year mean you should abandon traditional diversification?

Should you change your portfolio under an inflationary scenario?

What if high inflation doesn’t stick around?

I’ll offer some follow-up thoughts on how diversification in certain asset classes can help during an inflationary environment in a follow-up piece.

Further Reading:
How Do Stocks Perform When the Fed Raises Rates?

1For comparison purposes, long-term bonds (TLT) are down more than 10%. Short-term bonds, while offering lower yields, hold up better during rising rate environments.