Here’s a chart comparing the S&P to a mystery asset that’s performed even better: 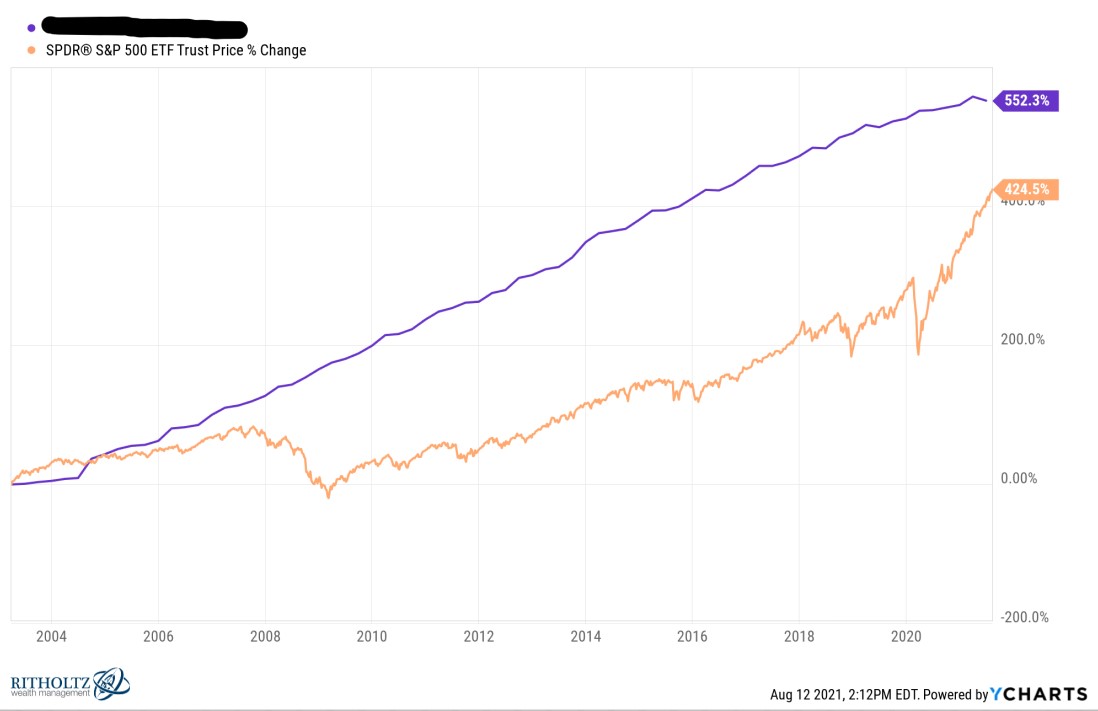 It’s up almost 11% per year in this time with a much smoother upward trajectory. Hedge fund managers would kill for an equity line that looks like this.

OK, trick question. Its student loan debt in the United States, which has grown from $250 billion in 2003 to nearly $1.6 trillion today.

Last week the Biden administration announced the student loan moratorium will be extended through January:

Under the action, payments on federal student loans will remain paused through Jan. 31, 2022. Interest rates will remain at 0% during that period, and debt collection efforts will be suspended. Those measures have been in place since early in the pandemic but were set to expire Sept. 30.

There has been a lot of talk in recent years about the potential for the government to cancel student loans.

There are arguments for and against this idea.

If we were to cancel student loans, it would offer some financial breathing room to young people in terms of disposable income. Most people in the past weren’t saddled with student loans the likes of which we see today in most cases. Also this would be an investment in the economy since higher education tends to lead to higher levels of income.

On the other hand, this wouldn’t be all that fair to those who have already paid off their loans. Also, only one-third or so of the population even has a college degree and this group skews wealthy. Why should we wipe the debts of people who are already in a better position education-wise than the majority of Americans? And how does this fix the problem of ever-rising college tuition?

I don’t have a dog in this fight but how about this as a compromise — just cancel the interest payments. Make everyone’s loan 0%.

I did a little research on the rates people pay on these loans:

Why does anyone need to make so much money on this debt? The government can effectively borrow at 0% short-term rates right now. Wouldn’t this be a good investment to make for future generations of workers?

Now put the interest rate at 0% and we’re talking a monthly payment of $230. Over the course of the 10 year life of the loan, that’s a total savings of almost $9,000. And that $80 or so of monthly savings offers a nice little bump in the bottom line for young people.

Obviously, everyone’s balance and interest rate are going to be different but I don’t see who gets harmed here.

You’re never going to make everyone happy but isn’t this a good compromise? People still pay back the money they borrowed, but now they do so at a lower cost of capital.

Michael and I discussed the idea of canceling student loan debt and much more on this week’s Animal Spirits video:

1I think technically the government guarantees these loans but that’s semantics.