Reddit co-founder Alexis Ohanian gave some advice to young people in a recent interview with the New York Times:

What’s your advice for college grads?

Do you really need to go to college? There is a huge student loan debt problem in this country. I think there’s going to need to be a drastic change in how these universities work. And I also think we’ve lambasted the trades for way too long. You can make six figures as a welder.

These kinds of statements irk me, especially when they come from rich entrepreneurs. This line of thinking reeks of survivorship bias.

Successful entrepreneurs must understand they’re the minority. Most businesses fail and most 18 year-olds don’t have what it takes to start, let alone run their own business. I certainly would have been lost at that age trying to make a go at it on my own.

I get what Ohanian is trying to say here. There are plenty of problems with the higher education system. It’s too expensive. Most students aren’t given enough guidance in terms of how their preferred area of study will lead to actual employment or how much that employment will pay. Student loans can also be a huge burden after school for many.

In many ways, much like personal finance, people are mostly on their own when it comes to figuring these things out, which is a shame.

And then there’s the fact that it’s a tad ridiculous that so many employers require a college degree to even be considered for a position in the first place. Unfortunately, just because the current system isn’t perfect doesn’t mean young people can avoid it all together.

Here are the facts:

The unemployment rate for those with a college degree is always much lower than for those who didn’t get a degree. Here’s another way of looking at this from JP Morgan which includes income data: 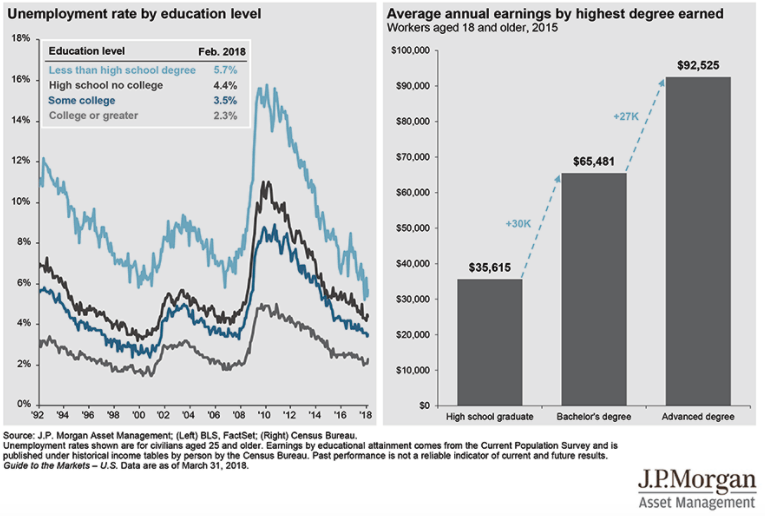 …the average student loan debt per college graduate is just $17,126, less than the price of a new car. Obviously, coming out of school with six-figure debt isn’t a great idea but those are the extreme cases, not the norm.

It’s estimated that just 7% of current borrowers have debts in excess of $100,000, which is just 1% of the adult population in the U.S. (and the majority of those with six-figure debts are people who go on to post-graduate studies).

Again, the current system isn’t perfect by any stretch of the imagination but going to college gives you a much higher probability of success in your career than skipping it altogether to start your own business.

A few more random thoughts on this:

Are we really expecting 18 year-olds to perform a cost-benefit analysis on whether or not they should go to college or skip it altogether and go straight to the working world to save on the tuition costs? Better yet, how many adults perform a cost-benefit analysis when they purchase a new car or house? How many adults do you know who track their spending? Create a household budget? Pay down their debt every month? Save enough for retirement?

Then again, any 18-year-old who has the wherewithal to go through the ROI exercise and run the numbers will probably be fine in whatever they do. So they may as well go have fun for 4 years and dabble on the side with business ideas during college.

Also, can we really expect most young people to turn down the opportunity to have what could be four of the most fun years of their life? You couldn’t pay me six-figures to take back the experiences I had during my four (okay four-and-a-half) years of college.

While you can learn more through experience or self-learning than you can in the classroom, there’s something to be said for the social and life skills you can develop in the college setting. Meeting new people, living on your own, and becoming more responsible for your own actions are all underrated aspects of the college experience. While you could do these things outside of a college environment, going through them with your peers can be helpful.

In a perfect world, those students who don’t know exactly what they want to do with their lives would go to community college on the cheap for their first two years to knock out their prerequisites and then transfer to a state school to finish up. This would be a great strategy for those looking to save money and get a better idea of where they would like to take their studies and keep the costs manageable.

I get the ROI angle of taking your one-hundred grand and investing it or starting a business instead of going to school. That sounds like a great idea to an adult who has time to think through these things after already gaining valuable life experience. But I look at this like getting a wedding do-over. My wife and I have discussed how there’s no way we would have such a large, expensive wedding with so many guests if we had to do it all over again. But at the time, that’s all we wanted. Things change. Your priorities are different at age 18 than they are at age 36.

Does it make sense that having a college degree is a requirement for many jobs? Of course not. College doesn’t really matter that much in the grand scheme of things in terms of what you learned for most professions. Most entry-level jobs require some sort of training or trial by fire, not classrooms or textbooks. But that piece of paper is the price of admission for many desirable jobs.

Not everyone has to go to college. There are many successful people who didn’t and many career paths that don’t require higher education. I wish there were easier paths where students were offered an apprenticeship or vocational training that could be applied to actual career paths. I’m hopeful the tech industry will come up with a better, cheaper solution to this problem than telling young people to avoid college altogether. But I’m guessing the current system will be in place for the foreseeable future, for better or worse.

There’s no way to answer with any degree of certainty whether or not college is worth the cost because it’s a very personal question. I don’t think we can expect 18 year-olds to make that type of decision on their own when most really have no real world experience to base it on. Teachers, parents, and schools should be more involved in helping them figure this out.

Further Reading:
Some Things I Wish I Would Have Learned in College