I remember reading The Accidental Billionaires just after it came out in 2009 or so and being blown away by the back story of how Facebook was founded (This is the book the movie Social Network was based on).

After reading about the drama surrounding the founding of the company in a Harvard dorm room I would never have guessed Facebook would so quickly grow to become one of the largest public companies in the world. It’s impressive how Zuckerberg has gone from a punk in a hoodie to one the best CEOs in the world.

While the Facebook stock stumbled out of the blocks after its IPO in 2012, the returns since then have been just as impressive. From the IPO price, the stock is up over 350%. And from the low point after the stock got hammered in the first few months when it fell under $20 a share it’s up almost 850%.

I’m sure every investor wishes they would have bought this stock a few years ago but it hasn’t been an easy ride. These were the drawdowns you would have had to deal with to earn those huge returns (losses on the left scale, performance on the right scale): 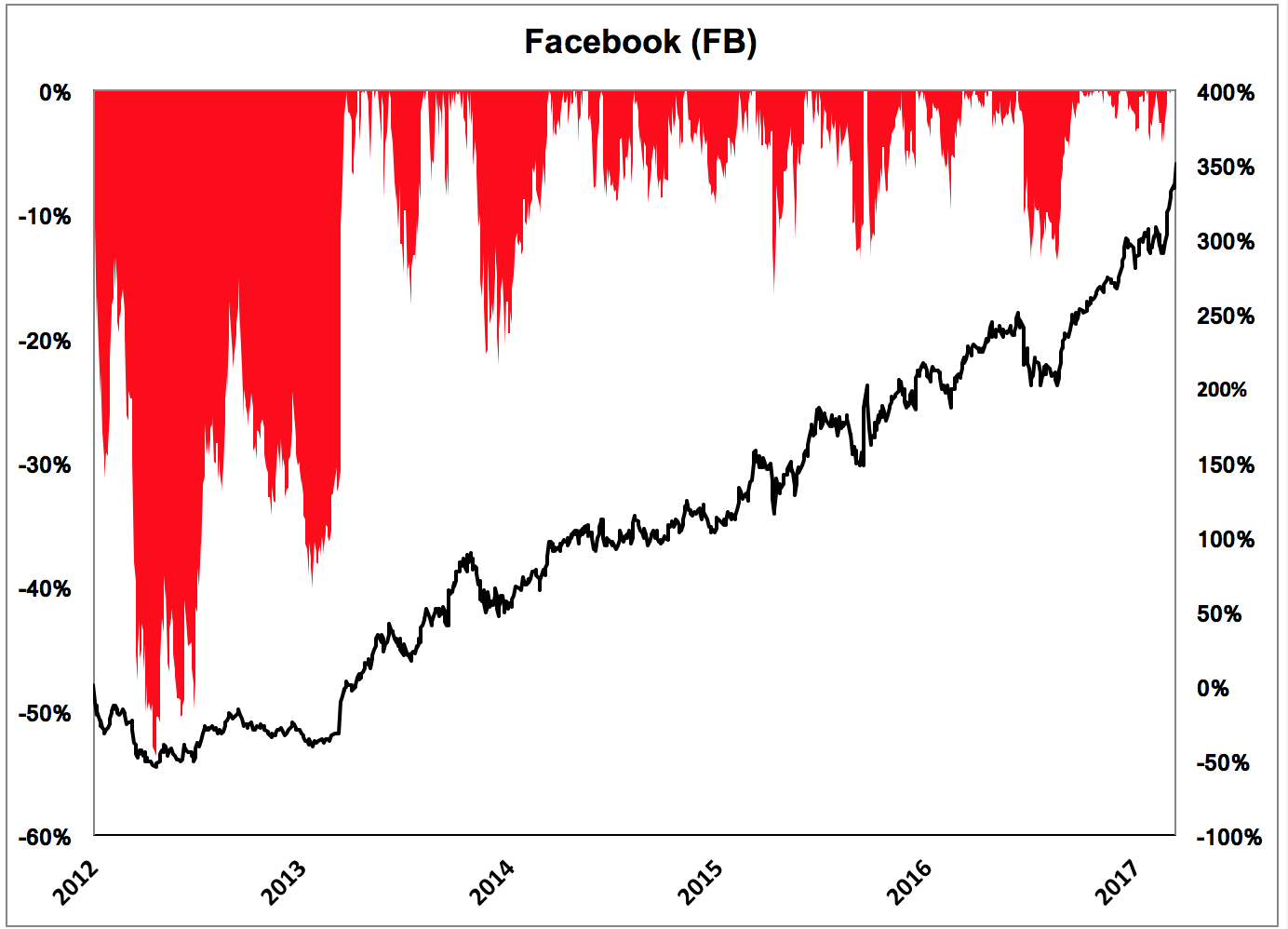 An investor in Facebook stock would have had to live with plenty of volatility including that enormous crash right out of the gate in 2012. No pain, no gain, as they say.

It’s only been a short period of time but this would seem like a classic example of the relationship between risk and reward. Yes, the stock has experienced large swings in price and big time losses but investors have been rewarded handsomely with big time gains in return.

This is how it’s supposed to work, right?

In theory, yes but in practice, investors aren’t always rewarded for accepting greater amounts of volatility or losses.

Twitter is a perfect example of this. Since going public in late-2013 the stock has fallen by 10% or more on a single day 13 times. It’s fallen by 5% or more almost 60 times. But investors haven’t exactly been on the receiving end of blockbuster gains by sitting still through these losses.

The path of Twitter’s stock performance has basically been the exact opposite of Facebook’s since going public. Instead of getting crushed after its IPO like Facebook, Twitter shot up more than 70% on its first day of trading and close to 170% within the first month-and-a-half.

It’s been downhill ever since.

The stock is down 36% from the IPO price and 76% from its all-time highs seen at the start of 2014. Here’s the Twitter drawdown chart during this time: 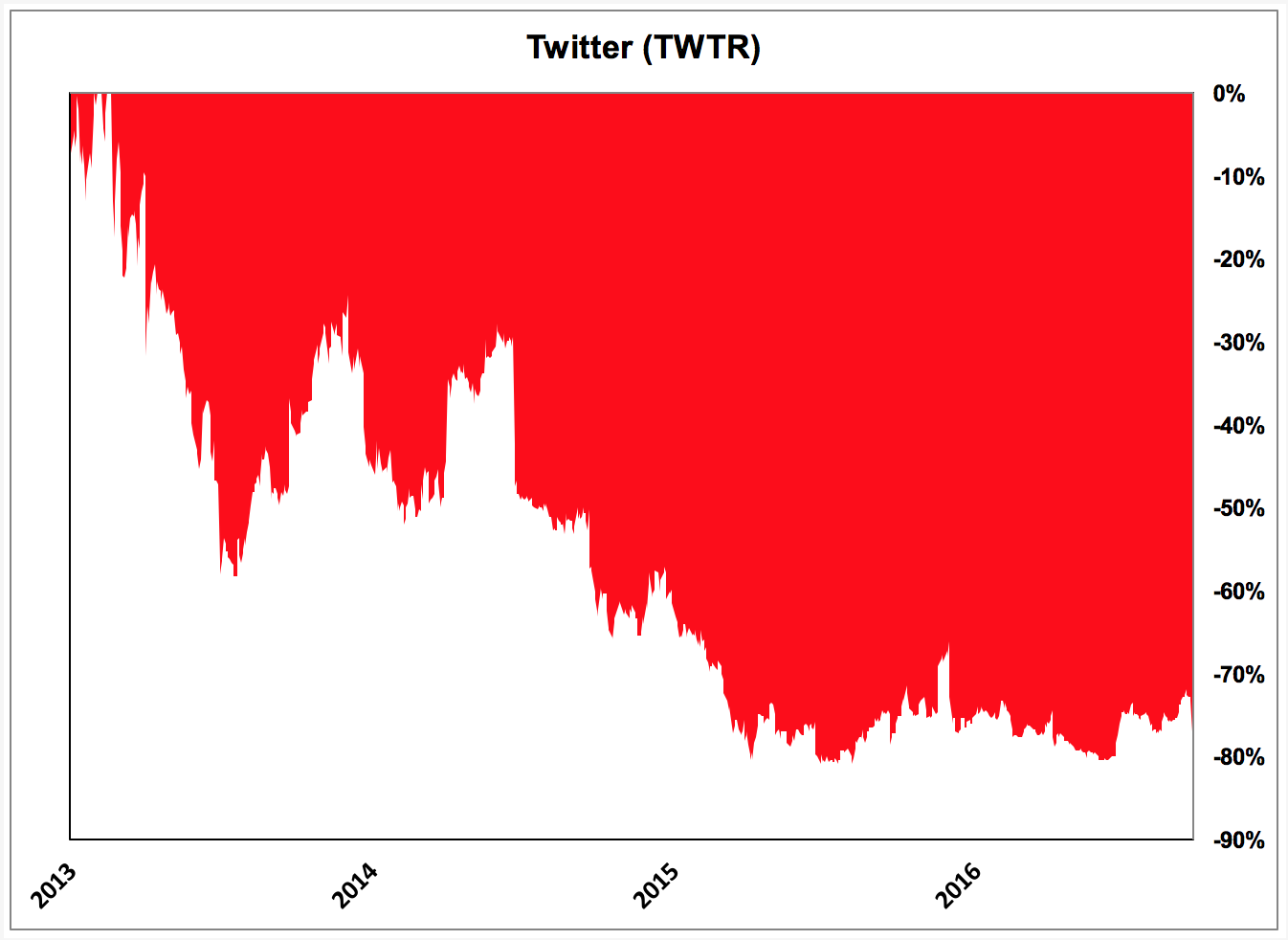 This stock has seen nothing but extreme volatility in its short time as a public corporation but investors who have held on have lost the majority of their capital.

It’s alway fun to play this game but this is basically like talking to your friends about what you would do with all your lottery winnings.

I get why people talk about the winners like Facebook, Netflix, Apple, Amazon and the like. Success stories make us feel like it’s possible to make huge amounts of money by picking stocks that are sure things in hindsight. All we have to do is pick the next one and we’ll all be rich.

Unfortunately, for every Facebook, there are countless Twitters. The winners write the history books but there are far more big losers in the stock market than winners. This is the nature of the beast that is the stock market.

Risk and reward are attached at the hip in the financial markets. But this is a highly dysfunctional relationship when dealing with individual securities.

Further Reading:
The Downfall of the Popular IPO