In a recent piece, I discussed why it’s not that out of the ordinary for a handful of stocks to account for a large portion of the stock market’s gains. This is just the nature of the beast with the stock market. There are very few big winners and lots of big losers over the long haul.

This year the largest stocks are some of the biggest winners in the market: 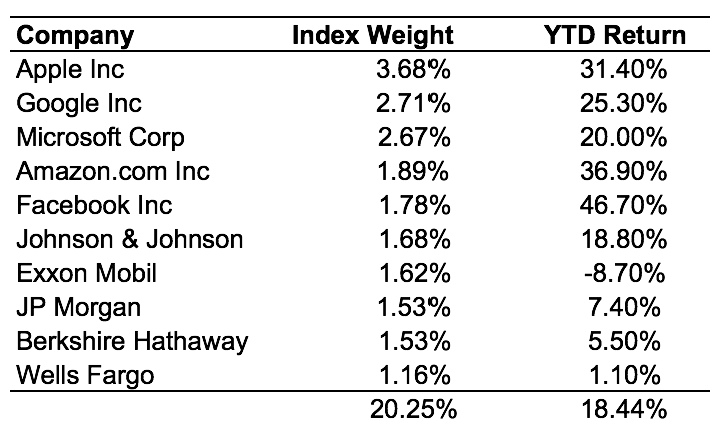 The average return for the top 10 stocks is almost 19%, just shy of double the 11% or so return on the S&P 500. While it’s not an aberration for a small number of stocks to carry the returns in the stock market over time, it is out of the ordinary to see the biggest names outperform like this.

Ned Davis Research wrote a piece a few years ago that showed from 1972 to 2013 the S&P 500 was up close to 5000% but if you would have owned just the biggest stock in the index every year you would have only gained around 400%.

Trees don’t grow to the sky so it would make sense that there is a ceiling for the performance of the biggest names in the market. The biggest gains come from getting to the top spot, not after you already make it.

It can also be useful to see how the composition of the biggest stocks in the market has changed over the years. Using data from S&P Dow Indices, I broke out the top 10 stocks in the S&P 500 at year-end every five years going back to 1980:

Here are some observations on this data:

Further Reading:
The S&P 500 is the World’s Largest Momentum Fund

Thanks to Lawrence Hamtil for providing the data for this.