Roughly two-thirds of the country owns a home in the United States: 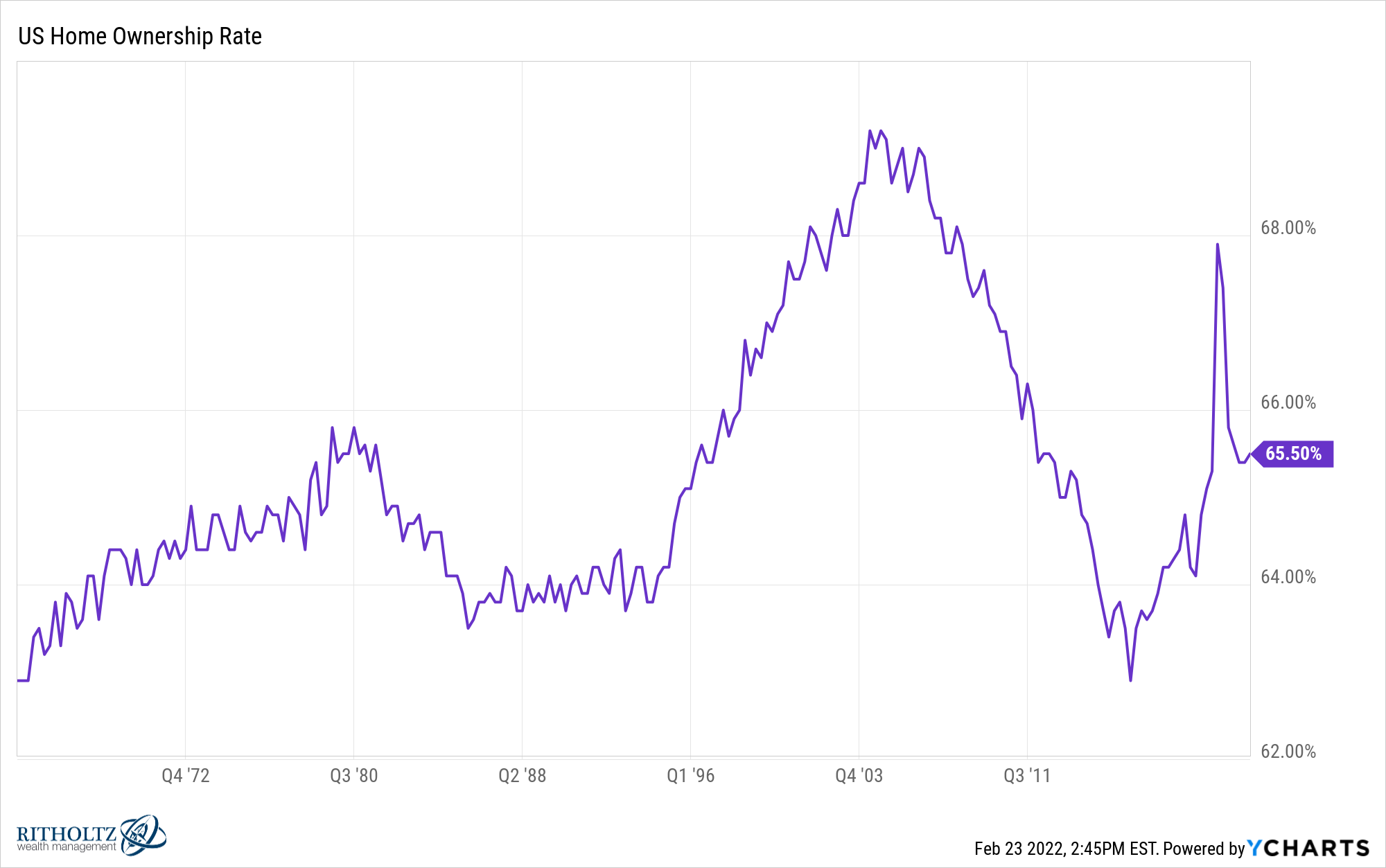 For those in this group who have owned their home for the past year or more, they’re sitting on some pretty nice gains.

When you combine rising home prices with ultra-low mortgage rates1, you could argue homeowners have never had it better.

A fixed rate mortgage with housing prices rising 20% over the past year has been the best inflation hedge you could ask for in the current environment.

You could make the case the current housing environment has benefitted the bottom 50% of households more than even the top 1% on a relative basis:

Obviously, the top 1% owns most of the financial assets along with some real estate. But on a relative basis, the bottom 50% has the majority of their net worth tied up in their primary residence.

While this has been a wonderful environment for those who currently own a home, it’s probably going to make it much worse going forward for those in the bottom 50% who don’t own a home but would like to someday.

Here are some stats from a recent Redfin update on the housing market:

To sum up — low supply, higher monthly payments, bidding wars and rising prices. Not great if you’re in the market for a house and don’t currently own one.

This housing market won’t last forever. No trend does. We simply can’t see housing prices rise at their current clip indefinitely into the future.

But it doesn’t seem like the current unhealthy housing market is going to all of the sudden get better anytime soon. It could be years until we see anything approaching normal when it comes to residential real estate.

The problem is rising mortgage rates and rising housing prices have led to the highest monthly payment ever for the median mortgage payment.

This is going to make it even harder for those in the bottom 50% to take part in the housing market.

The subprime mortgage crisis was terrible for a lot of people who over-extended themselves and took on too much debt or too much house.

But there were likely a lot of people who purchased a home in the 2000s housing bubble that didn’t lose their home that are in a much better financial position because they were able to access a mortgage and buy a house.

Housing prices are much higher than they were even at the height of the housing bubble: 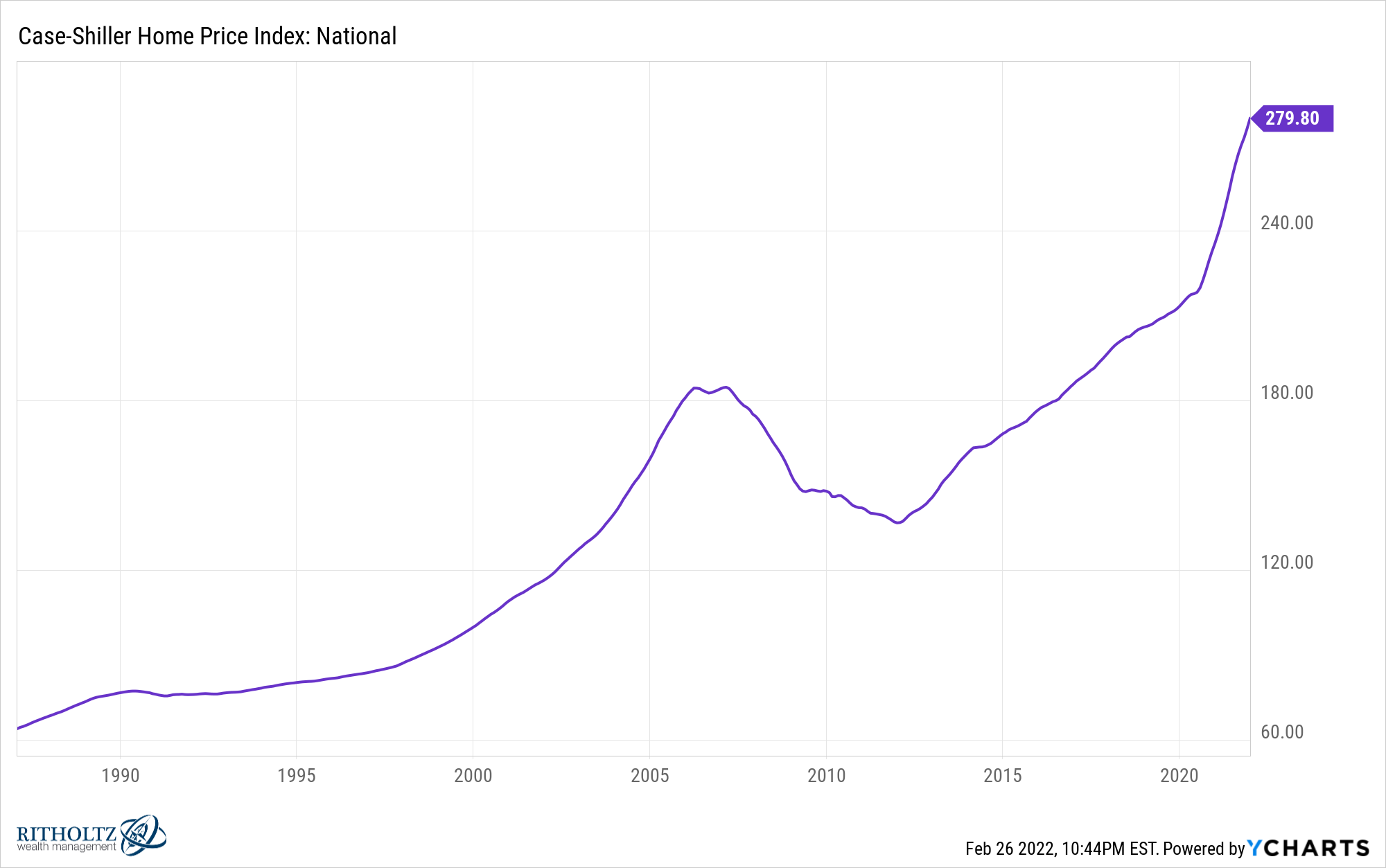 Lending standards were way too lax back then but there were certainly people in the bottom 50% who benefitted.

Look how things have changed since the 2008 financial crisis and all of the banking regulations that were put in place because of it: 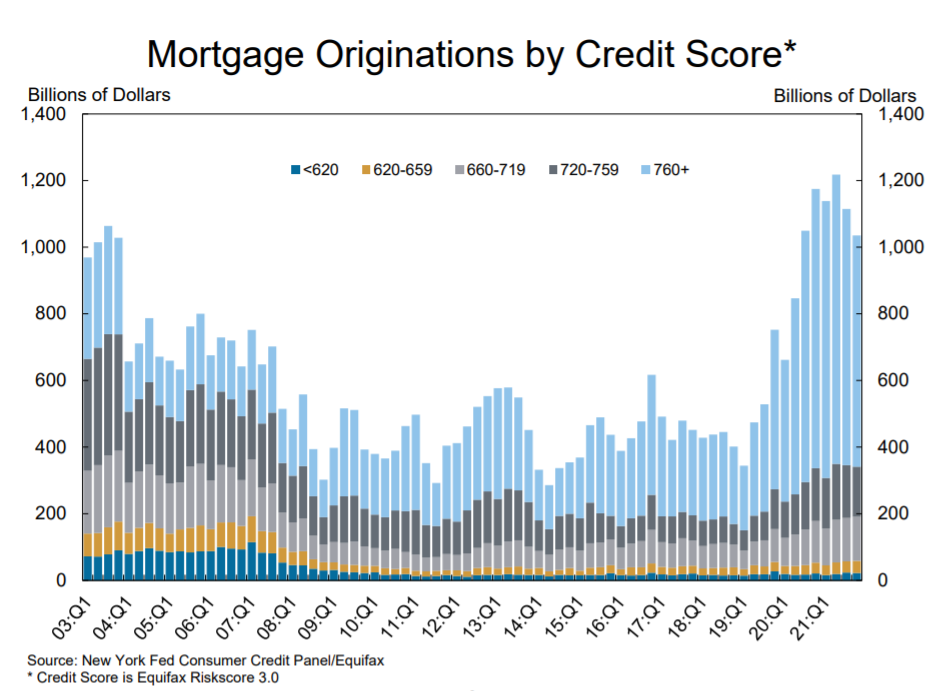 From 2004 through 2006, an average of roughly one-quarter of mortgage originations occurred for people with credit scores of 659 or less.

From 2019 through 2021 just 6% of mortgage originations occurred for households with credit scores of 659 or less.

Obviously, these numbers make for a healthier financial system and help the banks issuing mortgages. These numbers help explain why I don’t feel we’re in a housing bubble at the moment even with rapidly rising prices.

But it’s also true that it’s going to be far more difficult for people with less means to buy a home now that housing prices are much higher and credit standards are stricter.

And you could make the case (like I did here) that the housing market in the United States still has room to get even crazier than it already is when compared with other developed countries: 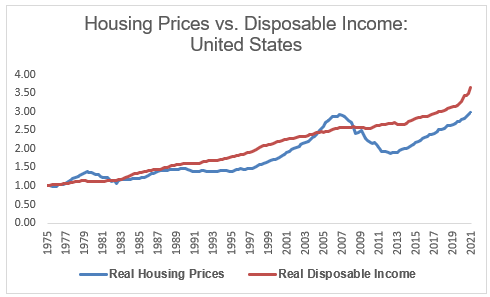 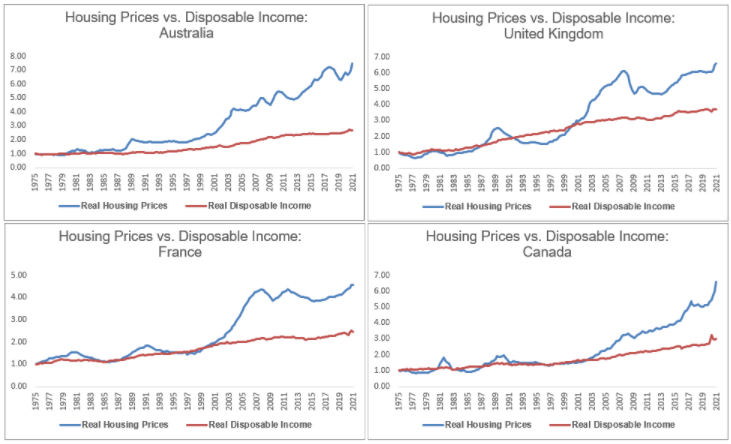 I don’t know for sure that housing prices in the United States are going to continue rising.

The future is unpredictable, as always.

But the set-up is there for a continued rise in prices based on demographics and housing supply alone.

If this happens and the majority of mortgages continue to go to those with more means, the gap between the haves and the have nots is going to continue to grow.

Michael and I discussed why this is one of the craziest real estate markets ever and much more on this week’s Animal Spirits video:

Further Reading:
Why U.S. Housing Prices Aren’t As Crazy As You Think

1Mortgage rates are finally rising (up to more than 4%) but anyone who has owned a home free longer than 12 months or so has either had the opportunity to refinance or lock in a low rate at the time of purchase.