This move is a blip on any long-term interest rate chart but on a relative basis, bonds are selling off here as yields rise.

There are a lot of variables that go into the movement of interest rates but it’s fairly obvious the Fed is a big reason rates are finally moving higher.

It’s now expected the Fed will raise short-term interest rates four times this year. Going from 0% to 1% in a world with 7% inflation certainly doesn’t seem like the end of the world but the Fed has a psychological stranglehold on the markets in many ways.

Plus, there’s a good chance borrowing rates will rise elsewhere.

In fact, we’re already seeing this with mortgage rates. The 30 year fixed rate was at roughly 2.8% in August. It’s now closer to 3.5%. Again still low by historical standards but if these rates continue to rise that could put some pressure on homebuyers.

But not in the way you would assume. 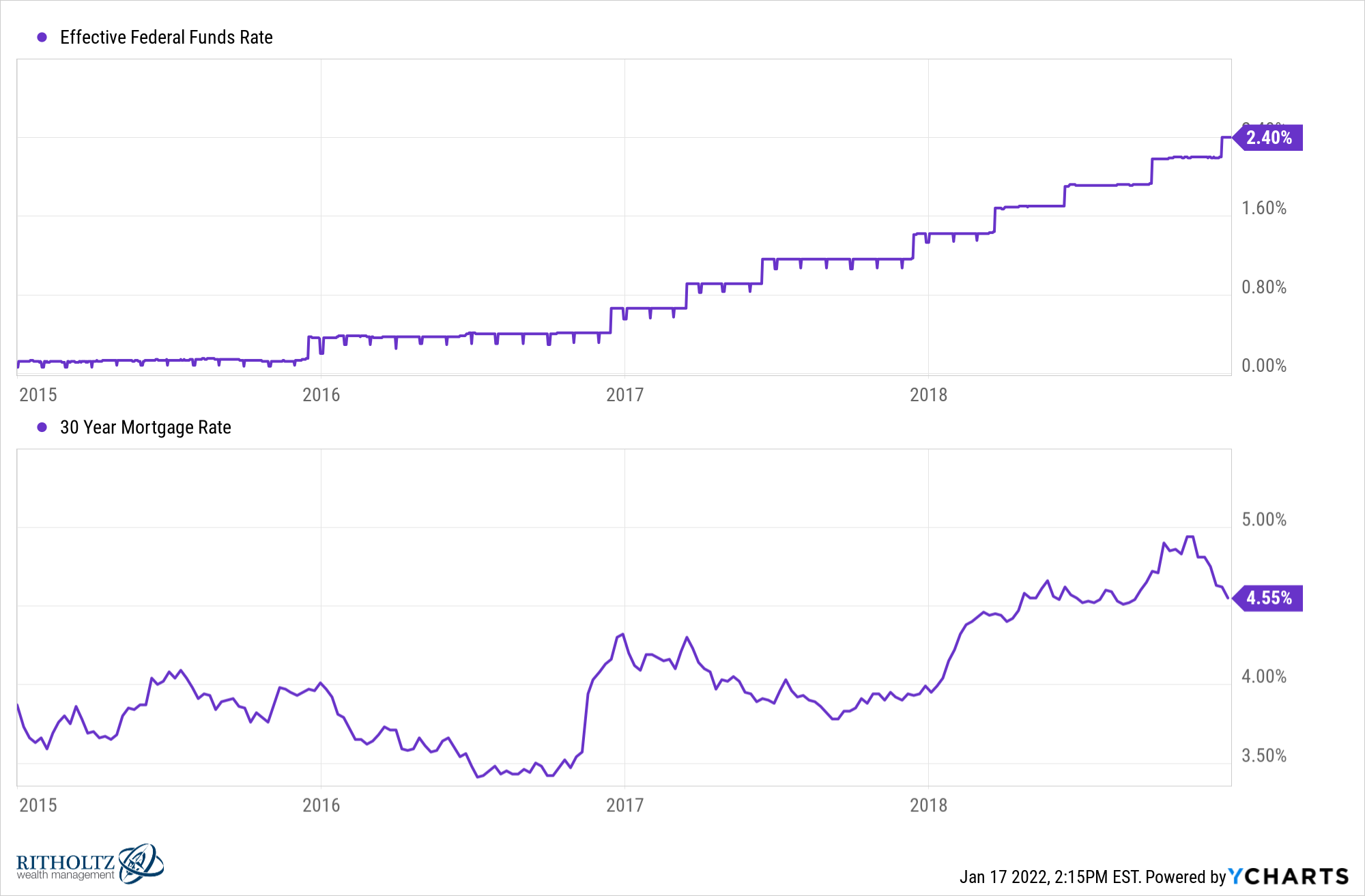 Finance theory would also tell us that higher interest rates should make home prices fall. If you raise the discount rate, all else equal, the value of the financial asset should go down. And this does make sense in theory.

Unfortunately, all else is rarely equal and the housing market doesn’t care about financial theory all that much.

Now you could say that’s simply because prices were still recovering from the housing crash that bottomed in 2012. We should put these numbers into context. 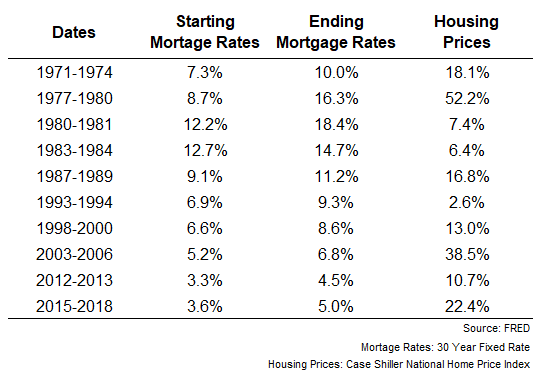 Some thoughts on this data:

How did the economy function with borrowing rates in the double-digits? Can you imagine buying a house with an 18% mortgage rate in 1981?

It actually makes sense that housing prices go up when mortgage rates rise.

There was a survey earlier this month from Redfin asking prospective homebuyers how they would react if mortgage rates were to rise above 3.5%: 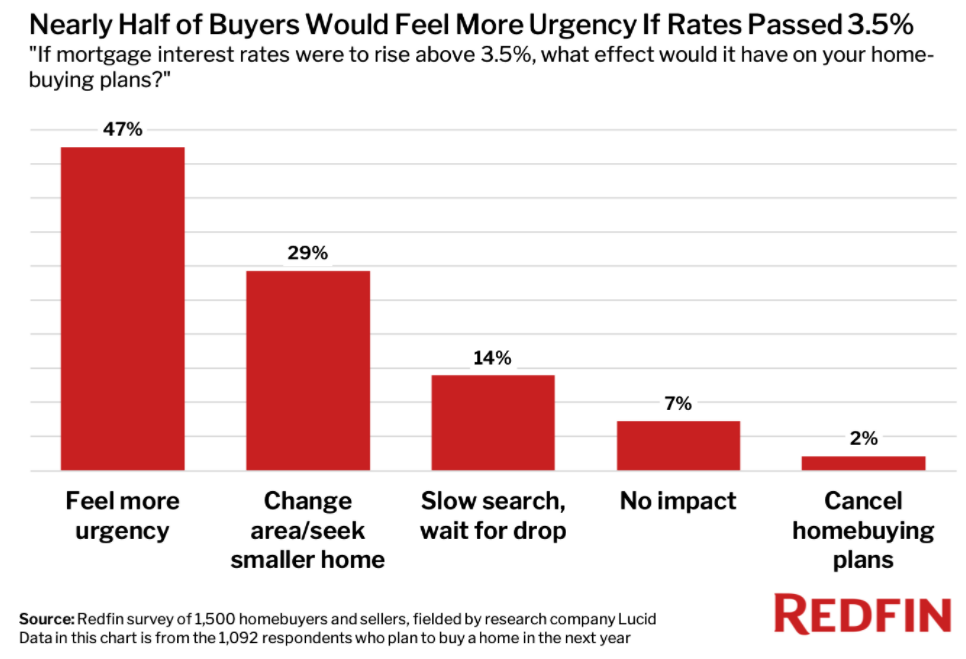 Nearly half of those surveyed claimed this would cause a greater sense of urgency to get in and buy. This doesn’t make sense at face value when you consider higher borrowing costs mean higher monthly payments.

But if you’ve been sitting on the sidelines watching prices go up while rates go down it could make you nervous that rates will continue rising once they start taking off. And homeowners are probably less likely to sell in the face of rising rates if they already have a low mortgage rate locked in on the house they own.

So you get this scenario where buyers are quicker to pull the trigger while sellers could pull back the supply of homes for sale. And when the supply is already as low as it’s ever been it wouldn’t take much to cause a supply-demand imbalance: 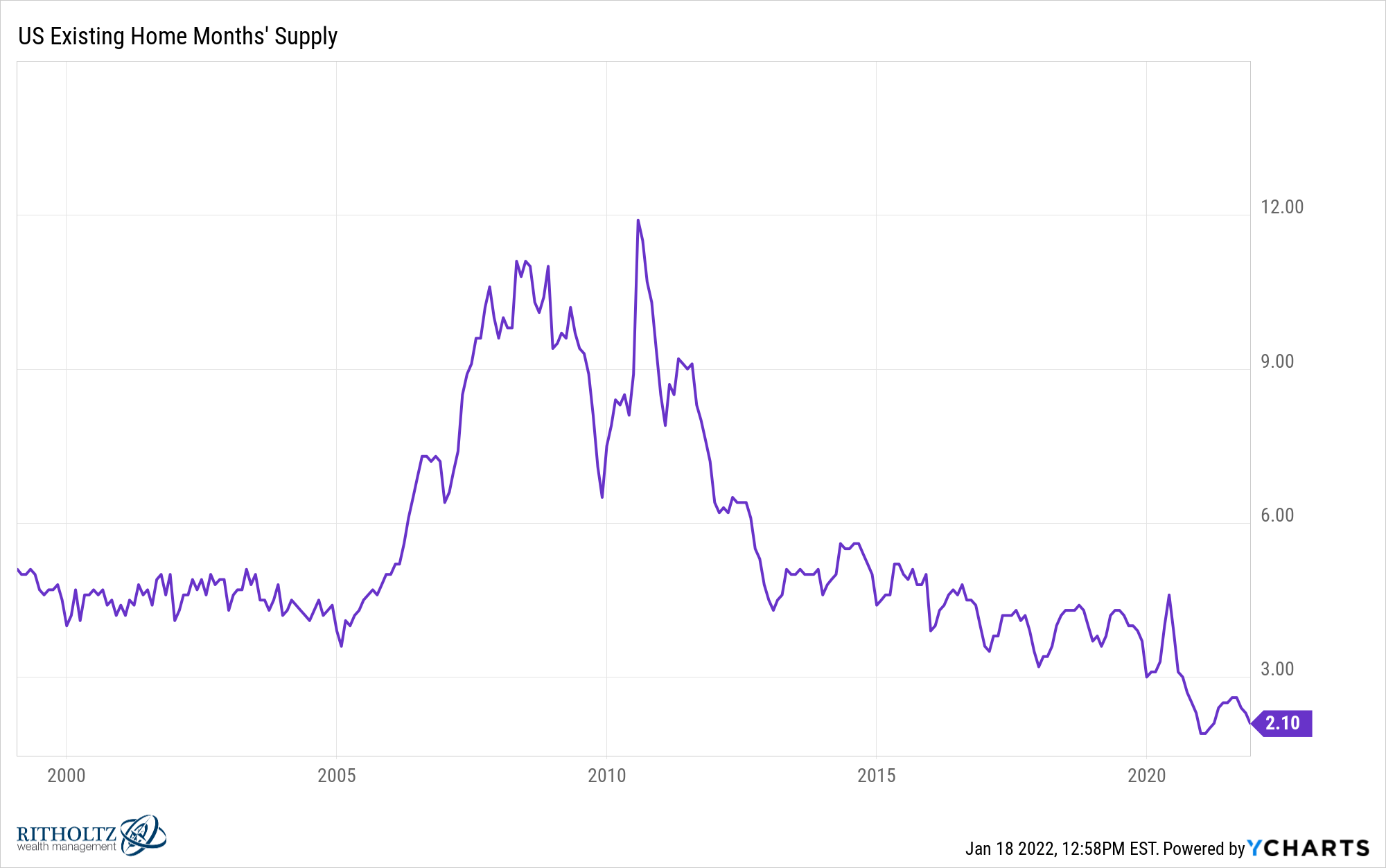 Another reason housing prices tend to shrug off financial theory when it comes to rising interest rates is that buying a house is the most emotional of all asset purchases.

Emotions are part of every market on earth because markets are made by humans. It’s impossible for us to leave human nature at the door.

While stocks, bonds and crypto can be ruled by fear, greed and envy, the housing market functions on different emotions.

It’s certainly possible this time could be different since housing prices are on such a hot streak.

But I wouldn’t bet my life on it.

Millennials are the largest demographic in the United States. They are in their prime household formation years.

Higher mortgage rates could slow the rise in housing prices but I doubt they would cause prices to fall dramatically with supply so low and so many willing buyers out there.